The Drums Are Getting Louder 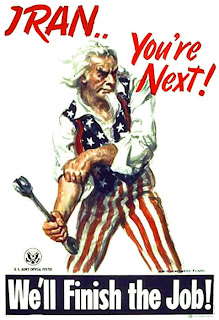 The beat goes on. And it gets louder. Mitt Romney claims that President Obama is a weakling:

“If Barack Obama is re-elected,” Romney robotically swaggered in Georgia, “Iran will have a nuclear weapon and the world will change if that’s the case.”


Maureen Dowd doubts that Romney understands international affairs -- and Israel in particular. But he blusters on:

I will station multiple aircraft carriers and warships at Iran’s door,” he said as if he were playing Risk. Not afraid to employ “military might” (or alarming alliteration), Romney wrote a blank check to Bibi Netanyahu, who governs a nation roiling with reactionary strains, ultra-Orthodox attacks on women and girls and attempts at gender segregation, and increasing global intolerance of the 45-year Palestinian occupation.


Then there is Liz Cheney. She carries her father's torch --and assumes that the old man knew what he was talking about:


At Aipac, Liz Cheney urged that we put ourselves in Israeli hands because “America’s track record on predicting when nations reach nuclear capability is abysmal.” She’s right about that, given her father’s wildly erroneous assertions about W.M.D.s in Iraq.

“There is no president,” she outrageously averred, “who has done more to delegitimize and undermine the state of Israel in recent history than President Obama.”

My father -- a veteran who spent the Second World War behind anti-aircraft guns in the Pacific-- was of the opinion that those most willing to fight wars are those who never will.

This entry is cross posted at The Moderate Voice.
Posted by Owen Gray at 8:19 am

Email ThisBlogThis!Share to TwitterShare to FacebookShare to Pinterest
Labels: War with Iran

Romney also doesn't stay on top of current events. Obama has two carriers already deployed in the Gulf, a third due to arrive this month. There's a fourth carrier steaming just a few days distant.

No one gets too concerned about facts any longer because the Americans who will vote Republican aren't guided by facts but emotions, many of them quite dark.

It's really disturbing -- and baffling -- to see how modern conservatives -- on both sides of the border -- are allergic to facts.

I know you've written on that subject, Mound. It's been documented. But, of course, that won't change their opinion.

In my opinion, your dad was right. Politicians who beat the war drums are often reluctant to go war themselves. There's never been better examples than Dick "the Tough Guy" Cheney and George "the Gunslinger" Bush.

During the Vietnam War, Cheney escaped the draft five times with five deferments. Courtesy of Papa, Little George served safely in the Texas National Guard, reporting for duty whenever he saw fit. Neither man had the courage to serve, and neither had the courage to face the consequences of openly refusing the draft.

Yet, safely out of harm's way years later, they worked tirelessly to plunge their country into expensive wars in Iraq and Afghanistan, wars that devestated or shortened the lives of tens of thousands of young men who had been duped into an unnecessary defense of their country.

I've a hunch that if today's political leaders were required to go to war along with their sons and daughters, as was frequently the case in Antiquity, they would beat the war drums far more thoughtfully than they do - just as President Obama is urging.

I've always thought that President Kennedy's response during the Cuban Missile Crisis had to do with the experience of having his boat blown out from under him.

Those who've been there are cautious about sending others into similar situations.

It is funny because in the couple of years before my dad died he was constantly convinced that the US would invade (or at least attack) Iran. I knew that they couldn't while they were still so engaged in Iraq and Afghanistan. But now, it could be different.

The problem is, I have known quite a few people from the middle east and everyone of them that I have met (including some Iraqis who were in the Iran-Iraq War) are profoundly frightened of such an attack because they have all said that people in the West just don't understand how patriotic and dangerous Iran can be. When the US invaded Iraq it was a country with the military might of Idaho. Iran is significantly more prepared.

It's pretty clear, Kirby, that the American invasion of Iraq strengthened Iran and helped destabalize the entire Middle East.

Long ago, when Graham Greene wrote the Quiet American, he exposed the pattern.

There is a significant faction in the United States who believe that to save a place, you have to destroy it.