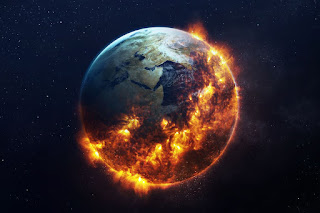 Chantal Hebert writes that the future of the Trudeau government  may well rest on what it decides to do about climate change:

The makeup of this Parliament should translate into impetus for more decisive environmental action. But on that score, the message from the realignment of the cabinet was muddled — presumably as a result of Trudeau’s determination to not ruffle more feathers in the Prairies.

Thursday’s throne speech will provide more insights as to whether the Liberals will embrace the opportunity to raise their climate change game or resist it.

It is a sign of the times that Trudeau’s minority government may be the first whose actions — or inaction — on climate change could determine its longevity.


Jason Kenney and Scott Moe want to build pipelines to both the West and East -- something Andrew Scheer committed his party to. He and they lost the election.

Trudeau wants to put the next election as far off as possible.

Email ThisBlogThis!Share to TwitterShare to FacebookShare to Pinterest
Labels: Trudeau And Climate Change

Cowardice. Well before Justin came on the scene Ottawa should have been insisting on the construction of proper refineries at or very near the Athabasca tar pits to transform bitumen into fully refined petroleum products for the Canadian market and then, perhaps, export. No guts, no glory. That would have smoked out the American fossil giants who see the Tar Sands as a convenient source of feedstock for their refineries. With Canada's low royalty rates and inability to collect for the environmental disaster growing in northern Alberta and Saskatchewan, the real money is made once that dilbit leaves our country.

Consider where we'd be if we had been serious about climate change twenty-five years ago, Mound.

I see in today's paper that Mark Carney has been named by the UN as its special envoy on climate change. A hard-headed pragmatist, I wonder what influence, if any, he will be able to exert on people like Trudeau, Owen.

curly larry and moe, o.k. kenny and moe, the two stooges, in case they haven't noticed it there are several articles around which report the entire world's oil business is now worth less than Apple. No point in throwing good money after bad. Kenny may want to keep his financial supporters happy, but me, not so much. Alberta ought to have saved a bit more of the money they made instead of giving tax breaks to oil companies, many of them foreign owned. they left billions worth of work to be done to orphoned wells and now he wants to build a pipeline, must be made. Recently a deep ocean drilling well was scrapped. It was valued at over $600M. It was sold for scrap Two cents on the dollar.

Saudi Arabia isn't making the money it used to on oil and they have the best in the world. they're most likely putting some of their assets up for sale, via the stock markets because the end it coming. Let some of the rubes buy the stock and have it go worthless. they'll have money from the sales.

There will always bee a need for oil. It is not only used as fuel but the manufacture of all sorts of things, but the need for Canadian crud is over. The only reason I can see why the feds are willing to sell the pipe line to the Indigenous people is they know it will be worthless in a short time and they can get their money back by selling it. This is the federal government of course which after 50 years still won't remove the mercury from the water at Grassy Narrows, or provide clean drinking water on any number of reserves or provide decent housing, so do you really think they'd sell something to Indigenous people which was really going to be a gold mine or even provide a decent return?

When I read Mark Carney had been appointed to his new position, I knew for sure we are in for a world of hurt and some know we are in real trouble on this earth. they're hoping he can get the job done and we might not have as big a shit show as we could have. I suspect they hope Mr. Carney will be able to use figures to explain to world leaders they are doomed if the dont' change their ways.

Was that a spelling oversight, e.a.f? Or did you purposely write "Canadian crud?"

They are doomed, e.a.f. Perhaps changing the messenger will get the message across.