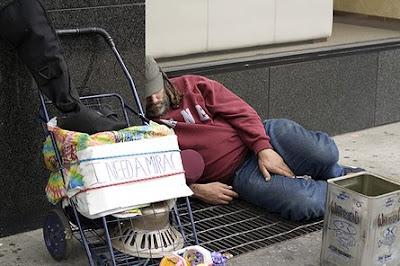 A study, with the provocative title The Rich and the Rest of Us, was released last week by the Canadian Centre for Policy Alternatives. It has been generating alot of comment in the nation's media. The study, written by Armine Yalnizyan, is based on an analysis of twenty-eight years of data from Statistics Canada. After massaging the numbers, Yalnizyan reached the following conclusions:

1.Median annual earnings for Canadians in the bottom ten percent of the income scale decreased in inflation adjusted dollars from $3358 in 1976 to $1050 in 2004.

3. Canadians earning between $50,000 and $85,000 have seen their inflation adjusted income rise two percent during the last twenty-eight years.

4. The top ten percent of Canadian families -- those earning more than $166,000 a year -- have seen their inflation adjusted earnings rise thirty percent in the last twenty-eight years. And they are putting in five percent less time at work than they did in the 1970's.

Yalnizyan's conclusions were immediately attacked by conservative columnists because they were narrowly focused on Canadian families who were raising children under eighteen years of age. Andrew Coyne, of the National Post, fumed that the study contained, "a great deal of selective emphasis and statistical jiggery pokery." He claimed that while median family incomes "slid sideways" over the last twenty-eight years, they "are nearly 20% higher, after inflation, than they were a decade ago." He also suggested that low incomes in families with children is at least partly attributable to the rise in single parent families -- which have increased from 8% in 1976 to 18% today. One parent -- without a doubt -- brings in less money than two.

Writing in the Globe and Mail, John Ibbitson dismissed thr work of most Canadian think tanks as "a waste of time." Then Ibbitson predicted that "[g]overnments that took this report at its word would increase upper income taxes, raise the minimum wage, bolster union rights and increase subsidies to manufacturers." Such policies, he claimed, would be "an invitation to disaster." After all, they were all tried in the 1970's; and everyone knows that they failed badly then. Or did they?

Conservative thinkers tend to hold governments responsible for the economic woes of the 1970's, forgetting that the Arab Israeli War of 1967 changed world economics much more than the economic prescriptions of Milton Friedman ever did. We are still suffering the effects of that convenient amnesia. Ibbitson ignores completely the oil price shock of the 1970's, when oil went from a dollar and a half a barrel to thirty-four dollars a barrel (see my post for November 20th). Before the formation of OPEC and the price distortions it engendered in world economies, one can argue that the very policies Ibbitson disparages were the kinds of investments in human capital that made Canada one of the most competitive economies in the world. Perhaps the real problem has been our refusal to ween ourselves from what until now has been the lifeblood of western economies -- oil. However that may be, even Ibbitson admits that for the bottom half of Canadians "income levels have been flat for a generation."

And it's that great divide between the top half and the bottom half of the Canadian population that should concern us -- simply because such a divide is not sustainable. It cannot be sustained because those at the top of the pyramid rely on those at the bottom to generate their incomes. The bottom half still consume the goods and services which increase the incomes of the wealthy. Henry Ford recognized this fact when he increased the salaries of his workers to the unheard of sum of five dollars a day, knowing that they were the people who would buy his Model T's.

For, however true Coyne's and Ibbitson's criticisms of economic policies in the 1970's may be, the issue is still how fairly we are dividing the economic pie. It is true that Yalnizyan's study ignores Canadians who do not have, or who have already launched, their children into the world. But she also ignores investment income which, for the most part, accrues to the richest Canadians. As Tom Walkom points out in the Toronto Star, "the richest 20 percent of Canadians own 75 percent of the nation's wealth." Moreover, "we allow the country's 100 top chief executive officers to make, on average, 240 times more than the typical worker (up from 106 times the average wage in 1998)"

The Canadian Centre for Policy Alternatives makes no secret of its left of centre politics. What it does make clear is that governments of all stripes -- Conservative, Liberal and New Democratic -- have been following right of centre policies for a generation. The consequences of those policies are now undeniable. It's time for the pendulum to swing back to the left.
Posted by Owen Gray at 8:51 am

A great blog, Owen.
Right-wing economists always advocate tax cuts over social investment. Unfortunately, Canada has been following this conservative agenda and the results are both shocking and depressing. See The Social Benefits and Economic Costs of Taxation: A Comparison of High- and Low-Tax Countries by Neil Brooks & Thaddeus Hwong December 6, 2006 from the Canadian Centre for Policy Alternatives.
I have reposted your blog on the gaianicity website.