Learning to Live in Poverty 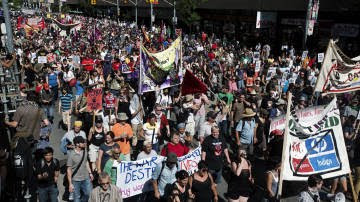 This past Friday, as protesters began to gather in the streets of Toronto, Anthony DiMaggio's op ed, "Gutting Public Education: Neoliberalism and the Politics of Opportunism," appeared at truthout.org. "America's political and economic elites," DiMaggio wrote, "have declared war on working, middle class and poor Americans.

Progressive critics of Republicans and Democrats have attacked the return of 'Hooverian economics' in recent years -- understood as the do nothing approach to dealing with the economic crisis and declining state budgets.

One of the most egregious examples of Hooverian economics has been the gutting of state education budgets. The problem at the state level is undoing the good accomplished by the federal stimulus package: "The American Association of School Administrators estimates that the number of jobs lost in the next school year from budget cuts (275,000) will roughly equal those originally preserved by the stimulus (300,000)." And, on Thursday, the U.S. Senate refused to extend unemployment benefits, which would create an estimated 200,000 jobs. Many who voted against the package objected to the section of the bill which offered aid to struggling state governments. The bill failed, even though it garnered the votes of 57 of the 100 senators.

But the crisis in the funding of public education goes back much further than today -- and it goes beyond K-12 schools. Public universities have been under the gun for a long time. DiMaggio offers a particularly dismal picture of employment possibilities at American universities:

For those who may reject this picture of higher ed as melodramatic or conspiratorial, one need look no further than the deteriorating state of academia today. Thirty years ago, non tenured professors accounted for 43 percent of all teachers in higher ed; that number had increased to a startling 70 percent by 2007. Most nontenured professors I've spoken to are forced to scrounge in search of course offerings at multiple institutions. When they manage to find work, they typically are paid within the range of $15,000 to $30,000 a year, despite possessing a master's degree or a PhD.

When placed beside the salaries and bonuses of the Wall Street firms which were kept afloat with taxpayer dollars, it's clear that the times -- and the system -- are out of joint. Not only are students being short changed by teacher layoffs, young teachers -- if they find work at all -- face the future as itinerant scholars.

As world leaders gather in Toronto this weekend, they will face the problem of how and when to reduce deficits. It's a problem which will not go away. But, as Paul Krugman has argued, now is not the time to end government stimulus programs: "Penny pinching at a time like this isn't just cruel; it endangers the nation's future. And it doesn't even do much to reduce our future debt burden, because stinting on spending now threatens the economic recovery, and with it the hope of rising revenues."

The protesters on the streets of Toronto are overwhelmingly young. For them, the emerging economic order is beginning to look and smell like week old fish. It's not hard to understand why they have taken to the streets. They are learning to live in poverty, while others continue to live well beyond their means.

This blog entry has been cross posted at The Moderate Voice.
Posted by Owen Gray at 7:00 am 3 comments: 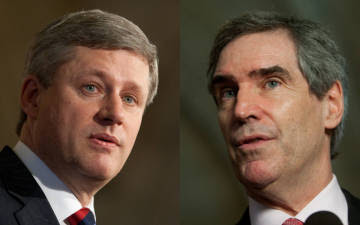 This blog entry is cross posted at The Moderate Voice.
Posted by Owen Gray at 8:15 am 6 comments:

The Injustice of Being President 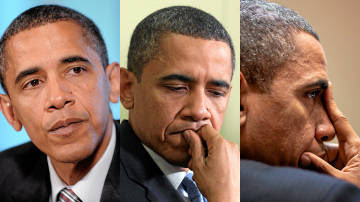 In a recent essay, David Shribman, the executive editor of the Pittsburgh Post Gazette, writes that President Obama's troubles stem from "a moment of great achievement and a moment of great failure." The irony, Sbribman says, is that the achievement belongs to Obama and the failure does not. The President's situation reminds us that -- if one seeks justice, or at least a modicum of fairness -- the presidency is not the place to find it.

is not that he gets the policy wrong, as Mr. Johnson did, perhaps with the big spending Great Society, almost certainly in Vietnam. It is that in his first 17 months in office, Mr. Obama repeatedly gets the politics wrong. For if he showed anything in a bruising primary fight with Hillary Rodham Clinton and then a tough general election battle with John McCain, it was that Barack Obama had a political instinct as fine tuned as Franklin Delano Roosevelt, Ronald Reagan or John F. Kennedy.

A prime example of Obama's blurred political instincts, writes Shribman, is his health care legislation. It is definitely what the nation needs. Unfortunately, "the biggest benefits of the plan will not be evident when voters go to the polls in midterm elections this November or when the President runs for re-election in 2012."

And now -- when he planned to sell his health care legislation to the American public -- the Gulf Oil Disaster has completely riveted the nation's attention. Obama didn't create the problem. He may not have understood how totally the second Bush administration had destroyed the country's regulatory infrastructure. But, as Gettysburg College's Shirley Anne Warshaw says, he and his administration "are paying the price for that right now."

The ecological disaster in the Gulf of Mexico has become a metaphor for all that was wrong with public policy for the last thirty years. Just as the Wall Street meltdown robbed millions of ordinary folks of their livelihoods and their futures, the oil which is killing wildlife and depositing black sludge on the pristine beaches of the South is destroying a culture and a way of life.

And -- because Obama is president -- he owns the problem. With each day that the hole is not plugged, citizens lose faith in their president. Some are even suggesting that historians will compare Obama to the well meaning but ineffective Jimmy Carter.

The Carter analogy is misplaced. There is a long way to go before citizens cast their votes. Like Abraham Lincoln, Obama is enduring dark days. And, like Lincoln, Obama finds himself beset by forces which would do the nation eternal harm. The challenges he faces are most certainly tests of his intelligence and his political instincts. But, more than that, they are a test of his character.

This blog entry is cross posted at The Moderate Voice.
Posted by Owen Gray at 8:43 am 4 comments:

A Voice in the Wilderness In Saturday's Globe and Mail, Jeffrey Simpson reviews Lament for America: Decline of the Superpower, Plan for Renewal, by Earl Fry of Brigham Young University. What is interesting about the book -- aside from Fry's analysis -- is that it has been published by the University of Toronto Press -- which, Simpson notes, is "hardly a household name in U.S. publishing circles."

Apparently, no American press -- university or otherwise -- has seen its way to publishing the book. And that, writes Simpson, is tragic, "because piling fact on fact, Prof. Fry outlines his country's immense and largely self inflicted problems, starting with an increasingly polarized political system lubricated by money and barnacled by lobbyists." Fry predicts that

bogged down in future years by the twin deficits (government and current account) which have required it to borrow most of the surplus savings accumulated in the rest of the world, and saddled with a weaker and more erratic currency, the United States will be hard pressed to sustain its role as the world's superpower.

We Canadians have no right to gloat. Like the previous U.S. administration, the present Canadian government blew through a $12 billion surplus in less than two years. During the last election, Mr. Harper and company claimed that there would be no recession in Canada -- in fact, he predicted, we would run a small surplus. Twelve months later we were almost $56 billion in the hole.

The Conservatives fervently believe that, ultimately, Milton Friedman will be vindicated. And that is why Mr. Harper visited European leaders this past week, arguing against a bank tax -- which the U.S., Britain and France advocate. He argues that, because Canadian banks are in better shape than most, they need no such tax to curb their speculative urges.

What he neglects to mention, of course, is that it was a previous Liberal government which left him with a surplus and a sound banking system. He also neglects to mention that his government has injected $125 billion into The Canada Mortgage and Housing Corporation -- the equivalent of the FHA -- thus offering Canadian banks the assurance that they will not be stuck with toxic housing assets.

Professor Fry knows that the way out of this mess is to both raise taxes and to cut spending. Ironically, Canadians have been here before -- in the early nineties. But any talk of raising taxes -- in both the U.S. and Canada -- is, at present, considered heresy. The financial crisis and the environmental crisis remind us that our so called "best and brightest" have been neither. And Simpson reminds us that those who are both best and bright have a hard time finding an audience.
Posted by Owen Gray at 11:16 am 2 comments: