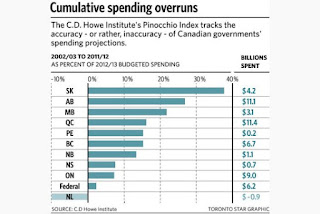 Carol Goar writes, in The Toronto Star, that the C.D. Howe Institute has developed a tool to measure government fiscal accountability. It's called the Pinocchio Index. She writes:


You’d never know it from the province’s balance sheet (it has a modest surplus) or Premier Brad Wall’s forceful rhetoric about fiscal responsibility. But the index shows Saskatchewan spent 38 per cent more than it budgeted between 2003 and 2012.

It has now displaced Alberta, which for years masked its overspending by lowballing its oil and gas revenues, as the worst offender.

Most of the credit belongs to former premier Danny Williams, who brought down government spending faster than he said he would. The province’s expenditures have come in 10-per-cent underbudget for the past decade.


Perhaps even more surprising is Ontario's fiscal position. If you believe Tim Hudak's rhetoric, the province is going to hell in a hand basket. But:


It stuck to its budget plans better than any of its provincial peers (with the possible exception of Newfoundland). Moreover, its accounting methods are transparent and reliable. The province may be in the crosshairs of credit rating agencies right now, but it has a strong record of delivering what it promised.

The Howe Institute does give Stephen Harper credit for fiscal prudence. However:

Contrary to popular belief, Conservative governments aren’t always good fiscal managers. They may boast louder than their Liberal or New Democratic rivals about their fiscal rectitude. But only two Tory leaders — Williams and Prime Minister Stephen Harper — have made good on their claims.


A long list of others — former Alberta premiers Ralph Klein and Ed Stelmach and current premier Alison Redford; Saskatchewan’s Wall (whose Saskatchewan party is to the right of the Conservatives) and former and current Yukon premiers Dennis Fentie and Darrell Pasloski (whose Yukon party is a Conservative break-off) — brazenly misrepresented their spending plans. The Liberal governments of Ontario and B.C. and the NDP government of Nova Scotia all scored better on the Pinocchio index.

The index does not address the question of whether or not a government's fiscal policies are appropriate to the circumstances it faces. As the Harper government steadfastly adopts the Cameron prescription for hard economic times, the chickens will come home to roost.

We await a C.D. Howe study on that issue.

Email ThisBlogThis!Share to TwitterShare to FacebookShare to Pinterest
Labels: The Pinocchio Index

Interesting index. To use another metaphor it helps to reveal that the "emperor has no clothes".

You would think that, by now, he would be getting a little cold, Philip. Unfortunately, he shows no signs of succumbing.