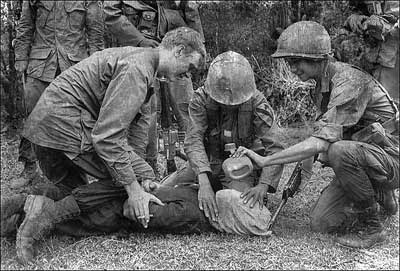 President Obama found himself in the middle of a crossfire last week, when his administration released four memos written by Bush administration lawyers, in support of what Dick Cheney has called "enhanced interrogation techniques."

New York Times columnist Paul Krugman insisted that "the only way we can regain our moral compass, not just for the sake of our position in the world, but for the sake of our own national conscience, is to investigate how [torture] happened, and, if necessary, to prosecute those responsible." Meanwhile, in The Washington Post, David Broder wrote that, while Krugman's argument is "a plausible sounding rationale, . . . it cloaks an unworthy desire for vengeance."

And, as the week went on, the rationale for using such techniques became increasingly clear. As Frank Rich reported in Sunday's Times, " . . . Major Paul Burney, a United States Army psychiatrist assigned to interrogations in Guantanamo Bay that summer of 2002, told Army investigators of another White House imperative: 'A large part of the time we were focused on trying to establish a link between Al Qaeda and Iraq and we were not being successful.'"

The Bush White House was certain there was a link between Saddam Hussein and Osama bin Laden -- they sold the invasion of Iraq on that claim -- and they were convinced that, if they simply kept applying the appropriate pressure, that link would become clear. They needed that link to justify what they planned to do, something former Secretary of Commerce Paul O'Neil confirmed was part of Bush's first cabinet meeting, eight months before September 11th. Mr. Bush and Mr. Cheney entered office obsessed with the idea that there was unfinished business in Iraq and -- come hell or high water, or "enhanced interrogation techniques," -- they were going to arrange a do-over.

The job of administration lawyers was to provide a legal rationale for those interrogation techniques. With law degrees from Harvard, Yale, Stanford and Michigan, they could be counted on to deliver. And, as the memos make clear, they did. Their defense now is, essentially, "it seemed like a good idea at the time;" and, anyway, they did not torture; they were merely offering policy options. Countless policies have been abandoned in the light of history and experience.

The problem is that others have been prosecuted and vilified for implementing those policies. Ordinary enlisted soldiers like Lynddie England and Charles Graner found their names placed in the docket. They were then court martialed, imprisoned and labelled "just a few bad apples." What is required is not vengeance, but justice.

The torture debate reveals a recurring pattern -- whether on Wall Street, in Washington or -- for that matter, as the Omar Khadr case make clear, in Ottawa. The folks at the bottom pay for the misjudgments and mistakes of those in authority. And the advantage of authority is that it buys immunity. Mr. Obama -- and Mr Harper -- have been confronted by a call for justice. They may not wish to respond. But the longer justice is denied, the angrier the reckoning will be.
Posted by Owen Gray at 8:11 am No comments: 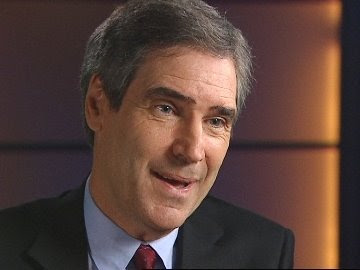 During the past week, Michael Ignatieff was all over the newspapers and the air waves, promoting his new book, True Patriot Love. It's a catchy title; and it will probably top the Canadian bestseller lists. It is sure to be reviewed in the New York Times. In a difficult period for publishers, it should make money.

But there is more at stake than money. The leadership convention for the Liberal Party of Canada is just around the corner, and -- even though the outcome has already been decided -- Ignatieff is using the book as a means to breathe life into his party and into his bid for the brass ring.

As he told Michael Valpe in the Globe and Mail last week, what he is trying to do is offer his country a vision for the 21st century. And part of that vision is based upon the idea of a National Dream -- in the sense that John A. MacDonald's transcontinental railway or Pierre Trudeau's Just Society were national dreams.

For Ignatieff, it is a shared dream which holds a country together. And it is the reason the federal government exits. "The job description of a federal government," he told Valpe, "is just one job -- hold the country together, make it stronger." To do that, Ignatieff said, "we need a public life in common, some set of reference points and allegiances to give us a way to relate to the strangers among whom we live." Those common allegiances find expression in common projects -- the railway, the Charter of Rights and Freedoms, National Health Insurance.

The problem for Ignatieff is that many Canadians fear that he himself is not yet done.There is much about him we still need to discover. He is no common man. His father's family were members of the Russian nobility. His mother's family are members of what passes, in this country, for nobility -- Ontario's Family Compact. And Ignatieff has spent his whole life coming to terms with that legacy.

Now that he is a potential prime minister, Canadians need time to come to terms with that legacy, too. Most of all, Ignatieff needs to convince Canadians that his patrician patriotism is as unshakable as the patriotism of the common man. And that his return to Canada was not just a career move -- that it was, instead, an act of true patriot love.
Posted by Owen Gray at 7:23 am 1 comment:

Looking for the Exit 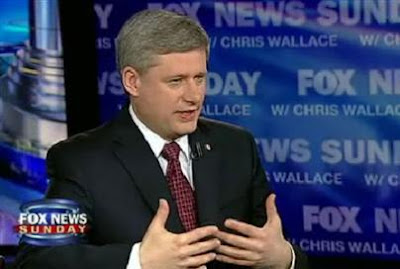 Last week, National Post columnist Don Martin suggested that the prime minister might be "polishing his resume." Whether or not that's true, as Tom Walkom wrote in the Toronto Star last Tuesday, "there is a quiet air of desperation around Stephen Harper."

For, essentially, the economic axioms upon which Mr. Harper built his academic and political career have crumbled. In 1991, the year he completed his Master's thesis in Economics, he wrote, "The record indicates that particularly activist Keynesian policy has been rare in the post war period. The results indicated that it should remain so." In the last six months, the prime minister has tried to throw that conclusion down the memory hole. The problem is that this is Canada, not Oceania.

Mr. Harper is certainly not the first politician whose words have come back to bite him. His real problem, though, is that his actions -- more than his words -- have done him in.

Like Richard Nixon, he is his own worst enemy. Taking his cue from Canada's last Conservative prime minister, Brian Mulroney, Harper planned to achieve power by building crucial support in Quebec. But, in the last election, his failure to understand the importance of cultural issues in that province spelled the difference between a majority and a minority government. Then, in November, desperately trying to save his government from defeat, he took direct aim at the Parti Quebecois, who represent the vast majority of Quebec voters. The result was that his support in that province evaporated.

Finally, in an effort to distance Harper from Mulroney -- who is presently in his own pot of boiling water -- the prime minister's office leaked the news that Mulroney had asked that his name be removed from all party lists. Mulroney exploded and called the perpetrators of that information liars. The feud with Mulroney has opened up the old divide between the two wings of the prime minister's party -- the Progressive Conservatives and the hard right Reform Party members.

It comes as no surprise that a man with a talent for wounding himself should be giving interviews to American and international media, singing the praises of Canada's banks -- which the previous Liberal government refused to cater to when they suggested mergers to help them bulk up and play in the same league as their international competitors. These are the same competitors that have received large bundles of taxpayer money, because they have been deemed too big to fail.

Mr. Harper has conceded that, like many of his fellow citizens, he "may eventually lose" his own job. Like any man with a wife and young children, he is looking around for something else before the axe falls. And, not a man to go backwards, Harper is fishing in international waters -- for "something like a lofty academic position at the London School of Economics," Martin suggests,"or a United Nations gig. In other words, he might have to follow Liberal leader Michael Ignatieff's career path in reverse."

As countless party leaders could tell the prime minister, there is life after politics. The trick is finding your way to the exit. 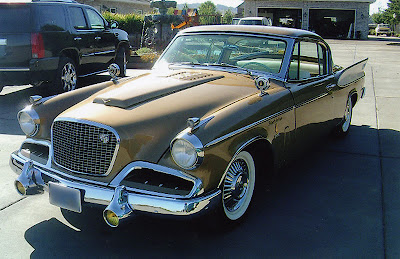 The man who taught me high school Physics drove a 1958 Studebaker Golden Hawk, like the car in the picture. It sat in the parking lot, a kind of elegant dinosaur, an emblem of the man himself. To his students, the car was the source of both humour and admiration. It couldn't match the Mercedes 300 SL, driven by another teacher, who was independently wealthy. But it did suggest a kind of dated opulence.

I thought of high school physics, and the chariot which carried my teacher to work, when Barack Obama removed Rick Waggoner from the chairmanship of General Motors last week. Like the Golden Hawk of another time, General Motors has become a symbol of dated opulence -- and, in some ways, GM's demise is emblematic of an age of, according to New York Times columnist David Brooks, "greed and stupidity."

Studebaker is just one of many automotive nameplates which have disappeared over the years. Its sister car, the Packard, died before the Studebaker. My youth was littered with automotive eulogies -- for cars like the Nash, the Hudson and the DeSoto. If memory serves, one of the first automatic transmissions arrived on the 1949 DeSoto. That innovation could not save a car which people did not wish to buy.

Most of these cars died because they could not weather various recessions -- and because the luxury they represented was incongruent with the times. As Frank Rich reminded his readers in Sunday's New York Times, as a culture we have been comfortably deluded, driving "self indulgent, wealth depleting gas guzzlers." And the management of GM drank the Kool Aid. But that delusion, like the economic bubble, has burst. "Any citizen or business that overspent or overborrowed in the bubble, subscribed to its reckless culture," Rich wrote. "That culture has crumbled everywhere now, and a new economic order will have to rise from its ruins."

What is truly sad is that the lives of millions of people have been shattered by the hubris and the stupidity of those in charge. Mr. Waggoner will go into retirement with a pension of $23 million. Like Charles Prince and Robert Rubin of Citi Bank, Angelo Mozello of Countrywide Financial, and Stanley O'Neil of Merrill-Lynch, his empire has crumbled. But, also like them, he rides off into the sunset, with more than enough money to pay the bills. That is how trickle down economics works.

And -- what is even more tragic -- this train wreck could have been avoided. Those who crafted the economic models which underpinned this economy were mesmerized by their own creations, assuming that human beings always make rational decisions. A little knowledge of history and the Greek and Roman classics would have relieved them of that notion. But, like the previous American administration, they considered those deposits of wisdom -- like the Geneva Conventions -- "quaint."

That Golden Hawk struck us as quaint, too. We were comfortable in our ignorance.
Posted by Owen Gray at 7:39 am No comments: