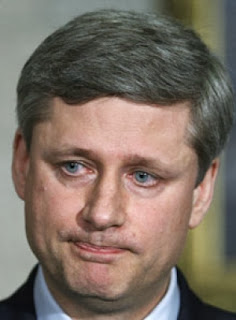 Over the weekend, Tom Walkom wrote that, if Stephen Harper were as smart as his enablers claim he is, he would declare victory and resign. Harper has achieved much of what he set out to do:


First, he is a political success. He managed to knit two parties at daggers drawn, Reform and the old Progressive Conservatives, into a coherent machine.

He won three elections with that machine. He made his Conservative Party competitive again in the crucial ridings around Toronto — while holding onto the West and (briefly) making major inroads into Quebec.


He has successfully refocused the country’s attention toward matters dear to the heart of small-c conservatives: crime and punishment, unregulated markets, leaner social programs, the military.


Both NDP Leader Tom Mulcair and Liberal Leader Justin Trudeau are running as anti-Harpers. Mulcair is portraying himself as the prosecutor-in-chief, whose job is to unearth the roots of Harper’s involvement in the Senate scandal. Trudeau’s pitch seems to be that he’s more likeable than Harper.


Neither opposition party has scripted an overall plan radically different from that of the governing Conservatives. On key economic matters, such as trade, pipelines and natural resource extraction, the Liberals and Conservative have near-identical views. The NDP position in many of these areas
remains mysterious.


But don't expect a resignation. Harper loves his job too much; and he really doesn't want to surrender control of his government or his party to anyone else -- even though Jason Kenny and Peter MacKay have signalled that they're waiting in the wings.

And, besides, the line that Harper is brilliant -- like everything else that emanates from these folks -- was cooked up in the PMO.

And in our local paper, there is a guest editorial from the Victoria Times-Colonist telling us that it's time to put the Senate scandal to bed and move on, rather like RoboCalls, and, more locally, the BC Rail subterfuge. Thanks for doing your part to engage the malarkey filters.

Harper has lots of friends in the "established" press, Danneau. They navigate with their eyes closed.

.. we think it highly unlikely that Stephen Harper will retire. He'll have to be ousted by scandal, forced from power in disgrace.. or by internal and public outcry.. or a sudden realization he is pissing on his own so called 'legacy'.. which already stinks to high heaven..

Looking back at his 'accomplishments' .. (an interesting term for what he has done with his opportunities) one cannot see sign of election promise, electoral mandate, or democratic reason involved. The list of his greasy actions however is truly staggering.. as is the list of his personal appointments.. Tom Flaherty being one flaming yet incredibly influential example

Cancel the Kelowna Accord, prorogue as defensive measure, omnibus 'budget' bills unrelated to any budget.. but used instead for attacking environmental legislation. Refused to acknowledge or investigate the massive electoral fraud that accompanied the 2011 majority & freed him from any parliamentary concerns whatsoever. How now ? The CPP (Canadian Pension Plan) ?? Afghanistan, Asbestos, United Nations? Kyoto? First Nations?

The current travesty regarding The National Energy Board 'Review' of the Northern Gateway Pipeline alone should suffice to drive Harper and his PMO from office. Spying, obstruction, intimidation, deceit, subterfuge are somehow 'Transparent' 'Accountable' 'Good Governance' ?? By who's twisted definitions?? You lie to and dishonor us all, sir !!

The ludicrous machinations, denials, comprehensive failures, incompetence and obstructions re the PMO/Senate Scandal are just piling the Harper garbage higher and deeper.

The emails and communication of Benjamin Perrin, Special Counsel to The Prime Minister, regarding this scandal have been secreted or deleted, wiped and shredded.. and he (Perrin) won't comment, the Prime Minister is not concerned.. nor the PMO .. or so they say ..

Well, Mr Harper, Mr. Perrin.. try to keep dancing around that. Try to sell Canadians the bad whisky that you feel those actions define .. ie Accountability or Honesty...

I agree, salamander, the Senate scandal is only the latest in a very long list of dishonourable actions.

I have been wrong before (a depressing number of times) about the political future. But I really don't think Harper will ever resign. And he will never willingly leave the PMO. If Trudeau were to win the next election, Harper will, I have no doubt, attempt to convince the GG that it is some kind of coup and that Trudeau is a Chinese agent. If you and I are alive 20 years from now Harper will still be in office (only we won't be able to talk about it because all such dissent will be illegal).

I understand your skepticism about Harper, Kirby. He is a control freak -- which is why his senate story is so unbelievable.

But he plays politics as a bloodsport. When the time comes, others will do to him what he has done to others.

“But he plays politics as a bloodsport. When the time comes, others will do to him what he has done to others.”

IMHO, Stevie's auto-da-fé seems to be chugging along just fine. It may be premature, but as the end-game develops to the election 22 months or so from now, what we have here is a dead man walking, he just doesn't know it yet.

.. the salamander apologizes to anyone named Tom Flaherty .. There is a Flanagan named Tom and a Flaherty named Jim .. & the less said of these two, the better.. Yet proofreading ie 2nd sober reading.. will be adhered to more carefully, in future!

I agree, Ed. Harper has made a career of taking advantage of others' weaknesses. However, he can't spot his own vulnerabilities.

He owes his survival more to pure dumb luck than to real skill. As the people he has appointed flame out, his own luck runs out.

I think readers understood your intent, salamander. Anyone of Irish descent can understand how one might confuse Flanagan with Flaherty.

Hitler too was a, coherent machine. How do you think Hitler gained control? Hitler lied, deceived, was corrupt, a thief, used dirty politics, dirty tactics and, he cheated to win. Sound familiar? It should.

Harper was Policy Chief for his, Northern Foundation of 1989. That should have been enough, to scare the hell out of everyone.

Once a Dictator such as Harper gains control? It is very difficult, to get rid of him. All dictators are control freaks and control absolutely everything and everybody. Harper controls with fear and threat.

To get rid of Harper, we would have to become another Syria. Harper has no decency, honor, ethics nor morals, what-so-ever.

Too many of us are used to the good and democratic Canada. We have to change our mind sets, Canada is no longer that good Canada. Canada is now a dictatorship and a cesspool of corruption.

Harper is the worst, most evil and corrupt PM, than all of the other PM's in the recorded history of Canada, put together.

Harper has thieved and sold everything of value in Canada, to Communist China. That doesn't even wake anybody up either.

Let's hope the Senate scandal will be a wake up call to Canadians, Anon.

If anything can wake them up, the Senate scandal should do just that.

Agreed: Harper as shrewd political strategist is pure Conservative theology. He's a tactician and that's what gets him in trouble. Big problem now is either getting Northern Gateway done before the next election or win the next election. I say there isn't enough time for the former and I agree Harper still relishes the latter---he's unlikely to go willingly but I think his party's fortunes would immediately improve if he did. I don't like these neo-rightists all dressed up in Tory clothes---so I'm glad it looks like he's staying on.

The list of Harper's successes has to be taken with salt. Small inroads in Quebec...then a great big out road; welds Tories and Reformers together but with treachery that still rankles to this day. Won three elections but failed to win a majority the second time, forcing him to continue suppressing his religious right backbench for an couple more years than planned---had to do it to be majority-electable but it's cost him at least one defection. How solid are those Toronto seats? Time will tell; Ontario seems to have been Robocall central last time.

I think Attawapskat was intended as a backhander to BC FNs blocking the pipeline. There are hundreds of reserves with amateurish bookkeeping and have been for a long time; have to ask why, therefore Attawapiskat, why at that time if it wasn't to smear all First Nations as the big battle with BC FNs draws closer? Didn't exactly work out that well when it fomented Idle No More.

Strategy is longterm; Harper's probably was at one time: unite the right and make Canada small-c friendly. But it's his tactical machinations that people remember and it's not very flattering: the bullying, especially of the Governor General when he needed a prorogation to avoid a confidence vote he would have lost, the contemptuous relationship with the judiciary, whose convictions of his party he refers to as differences of opinion, the contempt of parliament conviction, personal attacks ads, robocalls and more. They all contribute to his main problem: his popularity is sliding, time's running out and he doesn't have his business fixed.

I agree, he wants to stay on, but the time squeeze---of his own making--- compels him to do rash things like attempt to tilt an election win and, the dumbest one yet, pissing off the veterans who can muster a formidable opposition with military precision and loyalty. Purely tactics theologized as strategy.

Your analysis is impeccable, Scotty. Harper is a purely tactical politician; and, as last week's Manning Conference illustrated, movement conservatives are prepared to live without him.

I don't expect him to resign. But he can't prorogue the next election. If it's clear he'll lose, he might go. He doesn't like to lose.

Reading this there years after the fact is a great kittle walk back in time. I said for years that the best outcome for the 2015 election wouldn't just be a Harper defeat, but a Harper defeat to someone named Trudeau.

There was a delicious irony in watching Harper go down to defeat to Trudeau's son, CuJo. I worry, though, that Trudeau's policies will not be that different than Harper's.