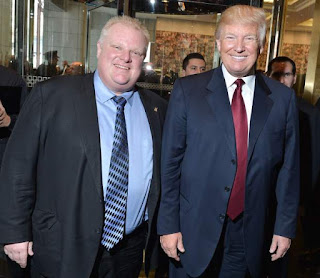 Canadians may like to believe that Americans would never elect Donald Trump. But Mitchell Anderson reminds his readers that Canada has already had its Trump. His name was Rob Ford:

The success of Trump and Ford are similar in that they rely on an ongoing media circus, incomparable name recognition and an alienated electorate. Both tout business expertise over political experience — Ford was no billionaire but publically played on his part ownership of the family label business. And both politicians enable their supporters by making it respectable to indulge in our ugliest instincts.


We may like to think that we're smarter and more discerning than our American cousins. But we'd be fooling ourselves:

Canadians enjoy a certain comparative smugness about America’s obvious social and racial divides, but the disturbing case of former mayor Rob Ford is a cautionary tale for both sides of the border. Well-read urban elites delighted in sharing social media posts mocking Ford but completely misjudged the groundswell of suburban anger towards the political ruling class.

In fact, every contemptuous reaction toward Ford’s many contempt-worthy deeds only seemed to further activate his suburban base. The genius of Ford seemed to reside in his ability to land on the front page almost every day whilst surviving serial scandals that would have fatally wounded almost every other politician with a higher moral bar. Sound familiar?


Trump made his name not as a master builder but as an entertainer. And, when a nation's politics become a nation's entertainment, that nation is is crisis.

Think of Rob Ford with the nuclear codes.

Image: news.nationalpost.com
Posted by Owen Gray at 8:13 am

Email ThisBlogThis!Share to TwitterShare to FacebookShare to Pinterest
Labels: Politics As Entertainment

The Donald has a great track record, probably all lies like Rob Ford who never spent a dime. Hillary has the worst track record of any presidental canditate, she is toast, a baby seal clubed and abandonded because the fur was not of value.

In a healthy society the misfits get laughed off stage. That we are now seeing so many misfits come to the fore should tell us that there is something very wrong. Think of Ford and Trump as canaries in their respective coal mines.

A very salient point, Toby. Ford and Trump tell us more about ourselves than they do about themselves.

Steve could very well be right. As I believe both you and Anderson are suggesting, that may be much more a result of the disturbed temper of certain segments of the electorate than the comparative attributes of the candidates.

In a democracy -- such as it is -- we get the government we deserve, John. Torontonians deserved better than Ford -- and finally got it. Let's hope the Americans finally get someone better than Trump.

Americans likely will get someone marginally better than Trump but it will still be a tragedy.

The choice is not exciting, rww. And that's sad.