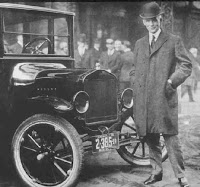 Henry Ford's name will forever be linked with the Model T. It will also be linked with a much more controversial proposition, namely the belief that -- as Ford himself said -- "history is bunk." Ford's proclamation is particularly ironic in view of the fact that, as he aged, Ford seemed to be increasingly stuck in the past. By the time Tex Avery convinced Ford's grandson to hire a team of "whiz kids" from the Harvard Business School, Ford had driven his company into the ground. Avery brought Robert McNamara into the company; and together they turned things around. Unfortunately, McNamara would eventually become the architect of the Vietnam War -- but that's another story for another post.

Despite the obvious absurdity of Ford's proposition, his argument is alive and well. It raised its head again last week when Christopher Bond, the ranking Republican on the Senate Intelligence Committee, according to The New York Times, "called for the committee to stop rehashing past controversies and to 'focus on the myriad threats we face today.'"

The immediate cause for Bond's admonition was the release of two pre-war intelligence reports on post-war Iraq. The reports predicted that after Saddam Hussein fell, "Iraq would be unlikely to split apart, but a post Saddam authority would face a deeply divided society with a significant chance that domestic groups would engage in violent conflict," characterized by "score settling" and "heightened competition for power among the different groups." The analysts also predicted that, "rogue ex-regime elements could forge an alliance with existing terrorist organizations or act independently to wage guerrilla warfare against the new government or coalition forces."

The popular argument is that because pre-war intelligence on Saddam's weapons of mass destruction was wrong, no one should have believed these predictions. However, what is conveniently swept under the rug is the information which was coming from Hans Blix and his weapons inspectors, who were on the ground in Iraq before the invasion. They kept sending back reports that there were no WMD to be found. Besides Blix, Scott Ritter, a former Marine and UN weapons inspector, kept insisting that Saddam's nuclear capacity had been destroyed by 1998 and could not have been reconstituted by 2001. He also said that 90% to 95% of Saddam's chenical and biological capacity had been destroyed and that Saddam did not constitute the threat he was declared to be. However, Blix and Ritter were dismissed as dupes. Those in power knew better and they therefore deserved the public's trust.

And what should we do with this intelligence now? Well, say Mr. Bond and the president's supporters, it is obviously irrelevant, because that was then and this is now. But it is instructive to dip a little farther back into "then."

Jules Witcover, also writing in The Times, refers to James Mann's book, The Rise of the Vulcans: The History of Bush's War Cabinet. Witcover reminds his readers that in the waning days of the first Bush administration, Paul Wolfowitz -- who was then Deputy Secretary of Defence to Dick Cheney -- directed his assistant I. Scooter Libby (do these names sound familiar for other reasons?) to prepare a draft which "set forth a new vision for a world dominated by a lone American superpower actively working to assure that no rival or group of rivals would ever emerge." Libby, for his part, passed the assignment to Zalmay Khalilzad -- another familiar name. Khalilzad produced a document which "envisioned a world in which American military power alone could rival or replace the collective security that had marked U.S. containment policy during the Cold War."

Remember, this was 1992. There is no evidence that George W. Bush had anything to do with these deliberations. At the time, he had not entered politics and he was happily attending to business as a part owner of the Texas Rangers. But the plan was not thrown together hastily after September 11, 2001. It was the kind of plan whose sweep and -- some would say -- beauty appealed to Wolfowitz, the mathematician. It inspired a kind of shock and awe.


Convinced of its brilliance, why should the plan's authors have paid any attention to the intelligence at hand? Their only problem was selling the idea to their boss. The rest, as they say, is history. And -- as Mr. Ford said -- history is bunk.
Posted by Owen Gray at 8:57 am