The Pitbulls And The Statesman 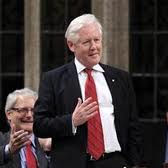 Since Thomas Mulcair assumed the leadership of the NDP, much has been written about Stephen Harper having met his match. Others have speculated that, between them, Harper and Mulcair are plotting the demise of the Liberal Party of Canada.

Certainly Harper deserves the kind of opposition he will encounter in Mulcair. In many ways, Mulcair is an inverted Stephen Harper. Charles Pascal writes in today's Toronto Star that the two share remarkable similarities:

Harper and Mulcair will seem like two peas in the parliamentary pod. Yes, both have tempers, both behave smarter than others in “the room,” both are stubborn and neither seems comfortable in their own skin. It’s always hard for me to trust anyone who doesn’t know how to smile a natural smile, at least in public. Neither the Prime Minister nor the Leader of the official Opposition seems to have a sense of humour about anything, especially themselves.


All of the speculation is premature.  We will see if Tom Mulcair can laugh, not only at others, but at himself. Which brings us to Bob Rae -- who has no trouble laughing at human foibles, even his own. Pascal writes that the coming battle between Harper and Mulcair presents Rae and the Liberals with a significant opportunity:

Enter stage middle-left, Bob Rae, who will increasingly have his natural statesmanship persona exaggerated by the company he keeps in the House of Commons. Rae’s energy, intelligence, humour, experience and a likeability quotient in Quebec, the West and down east will serve him well if he stands back and lets the other boys try to outrant each other. He needs to let Mulcair and Harper penetrate each other’s skin, content on playing the role of the above-the-fray statesman and mediator offering up ideas that matter, while meticulously exposing the current government’s move away from traditional Canadian values.


No one on the international stage will pay Harper the compliment of being a statesman. And I suspect that  international diplomats have already tagged John Baird as a buffoon. When Baird ordered  that Lester Pearson's name be removed from Ministry of Foreign Affairs letterhead, his action spoke volumes.

One hopes that Rae will remind Canadians -- and those beyond Canada's borders -- of Mike Pearson and what he stood for.

Email ThisBlogThis!Share to TwitterShare to FacebookShare to Pinterest
Labels: Rae The Statesman

Rae might be a nice guy, but he's drunk from the neo-liberal Kool-Aid and is irrelevant.

The NDP is calling for a return to the tax fairness of Brian Mulroney basically.

It's by no means certain, thwap, that the Liberal Party will survive. And if it dies, it will reap what it has sown.

There is still something to be said, though, for the mushy middle. Otherwise, politics will be warfare, twenty-four hours a day.

"There is still something to be said, though, for the mushy middle. Otherwise, politics will be warfare, twenty-four hours a day."

The mushy middle is dwindling because the forces that allowed it to exist are re-aligning.

How can the mushy middle be expected to prosper when the social-economic situation is polarizing?

That's why things are becoming so much more angry and ugly. On the one side, you have the "conservatives" who are either the sleaze-balls of the oil and financial sector or their stupid chump attack dogs, and on the other side you have us leftists and people who only realize that their employers are treating them like crap, their governments are ripping them off, and who have the sense to realize that it can't all be blamed on feminists, brown people, unions and welfare recipients.

Perhaps it had to come to this. Perhaps I am a fool to wish we had more respect for a civil society as things become more uncivil, thwap.

Canadians used to be able to talk through their problems. We proved that in two referendums.

I'm not sure we could do that again.

Don't get me wrong Owen. I WISH Canadians could talk.

I WISH protesters' concerns were treated with respect rather than with disdain and criminal suppression.

I would like our governments and our elites to respect the Charter of Rights and Freedoms, or at least our rights as citizens in a Parliamentary democracy.

But the other side appears to instead endorse torture, kettling, arbitrary arrest, and, in the case of Obama, arbitrary executions.

Oh, and add debased elections to that mix.

I understand, thwap. And, the truth is that, eventually, these folks will have to stand in the docket.

The news from Marc Mayrand today -- that election fraud appears to have happened in over 200 of our 308 ridings -- should be a wake up call to all Canadians, regardless of their political stripe.

thwap is correct - we are in the midst of class-warfare and the elites have turned our society into an armed camp of desperation for many and we are going down the road back to the nineteenth century. I don't think people will really wake up to this until the streets are running with blood.

Don't expect those in charge to understand that fact. They've never been desperate.

However, they will use the power they possess to protect their bunkers.

You sound a little confused. . .