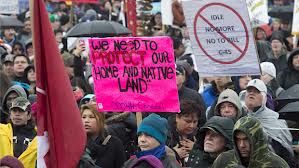 The Idle No More movement is about to declare war on Stephen Harper's vision of Canada, The Petro Power. According to this morning's Globe and Mail:

Allan Adam The chief of Alberta’s Athabasca Chipewyan First Nation said in an interview that local resentment will fuel a movement to block the main artery linking Fort McMurray to the south. “The protest will last through the summer and the blockade of Highway 63 is going to happen if things don’t change,” Mr. Adam said. “If he’s going to stonewall the first nations people, we can stonewall the highways too.”

Mr. Adam, 46, said many in the oil-sands region are tired of what he calls the Harper government’s unending push to weaken the country’s environmental laws. The prominent first nations leader has long raised concerns about how bitumen projects affect health in the Athabasca River region – his band has claimed higher cancer rates among its members, and more catches of deformed fish. “We’ve been Idling No More since 2007,” he said on Sunday.


The movement was fuelled by Bill C-45 -- the government's recently passed Omnibus Budget Bill -- which negated most of Canada's environmental legislation, particularly the Navigable Waters Act. It was a clear violation of the Indian Act and was the spark which lit the fuse.

The coming battle is between two visions of Canada -- the" petro power" and what John Ralston Saul has called  the "Metis Nation." Back in 2006, Harper told an American think tank, "you won't recognize Canada when I get through with it."

Canada's native peoples are dedicated to the Metis vision of Canada. The courts are with them. Now the question is, "Are Canadians with them?"

Email ThisBlogThis!Share to TwitterShare to FacebookShare to Pinterest
Labels: Idle No More

This is what Canada, our once good and decent country has sunk to. It's one thing to give this country to Communist China. It's quite another thing, to endanger F.N. lives. Harper had the utter gall, to declare himself a Christian, during his x-mas interview.

Harper is a monster, that has incited hate in this country, towards the F.N. Their students are no longer safe, at their school. I am really afraid for those kids. I wish their parents would keep them home, to keep them safe from violence.

There is one news propaganda web site, that is full of hate speech and hate filled comments, towards the F.N. people. They rival Hitler, his henchmen and Goebbels hatred towards the Jewish people.

Harper has to be forced to resign. I am truly wondering his sanity? I won't say, who his bizarre behavior reminds me of. Canada is not safe with Harper.

I note that Shawn Atleo stepped aside today -- for a "brief" respite.

Things are coming to a head, Anon.

I stand with the Métis Nation view of Canada. I just fear that the First Nation's people will be bought off with money one Nation at a time when necessary for full exploitation of a resource. Divide and conquer if you will! If that does not work, the government will play hardball, remember Oka and that was only over a golf course property.

Divide and conquer is standard operating procedure for Stephen Harper, Philip. And he's using that strategy against the First Nations.

That's why it's important for those of us who are not natives to stand with and by them. Ultimately, their fight is our fight.