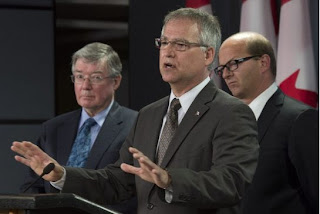 Goodyear, the minister of state for science and technology, has presided over the most retrograde federal S&T policy in memory.

During his tenure, the government shuttered the office of the National Science Adviser, blocked asbestos from a UN hazardous chemicals list on which it clearly belongs, gutted the Fisheries Act, gutted the Navigable Waters Protection Act, set out to weaken the Species at Risk Act, killed the long-form census, eroded Environment Canada’s ability to monitor climate change, earned an international reputation for muzzling scientists and, at a great potential cost, defunded the world’s leading freshwater research centre.

At the same time, changes to our science-funding regime and a makeover of the National Research Council, Canada’s science agency, into a tool box for industry have dented our basic-research infrastructure and damaged our prospects for innovation.


And, like so many of Harper's ministers, Goodyear doesn't know much about his area of responsibility:


Goodyear’s training in science is limited to a degree in chiropractics. That would be fine if his performance in the job suggested he understood and was a champion of the scientific enterprise.


Instead, he has repeatedly demonstrated the opposite. He briefly made international headlines in 2009 when he dodged a reporter’s question about whether he puts stock in the theory of evolution, refusing to answer “a question about my religious beliefs.” (He later clarified that he does “believe” in the theory, but his conflation of a scientific question with a religious one disturbed many scientists.) In any case, he has been complicit, at least, in a dark chapter in the history of Canadian science. And he is a symbol of the unenlightened style of government that, more than any particular policies, Harper’s opponents seem set on running against.


The problem, of course, is that most of Harper's caucus is as unenlightened as Goodyear. When the organization is populated by know-nothings, ignorance rules the roost.

Ignorance and just plain wrecklessness Owen. The list is just too long to mention, but the three latest, Toews, Goodyear and Kent are without question the three most dangerous in these crucial portfolios. The damage they've done, it seems is almost irreversible.

True, waterboy. On the prime minister's orders, these three have been wrecking balls.

.. the perversity of Harper driven appointments is hard to miss.
Its not just the dullards, evangelicals, the hysterical ..
its the diametrically opposed aspects as well.
A staggering collection of the maladroit, zero ethic,
thriving political animals thrust into senior positions
to front & pump purely Harper spite, delusion,
corporatism grandeur & wonkicy into legislation

Harper is the knobby kneed mean boy in the sandbox with tinkertoys,
army men, trains planes, tanks, ships and gas stations..
Unfortunately he's now a grown man but still in short shorts ..
and the sandbox as he sees it .. is Canada

Toews of course is a startling example .. sheesh !
& the oddly workaholic closeted Kenney living with mommy ..
Baird, the gadabout faux barking bully boy
Clement, a creep who's never seen a lie he didn't like
Oliver, the sniveling broker/lawyer/broker .. money dealer
Mackay, the man who can't be king right now.. or ever
Ashfield.. the maritimer who hates fish
Kent.. the quisling

The gene pool is thin gruel in the Harper pond of scumbags
and Ambrose or new twits.. the Rempels, Leitch's won't be saving anyone or anything
Poilievre ? The Alberta separatist ? Nice retro hair .. big mouth.. short on smarts

When you really look hard at the whole stinking toxic conservative/alliance miasma
its not hard to see how Harper is the cream of the crop of scum ...
a very right wingnut collection of poseurs, whiners, opportunists, sellout artists
The failure & incompetence level of this government is staggering.. and stinking

A blind monkey could choose from 10 Saskatchewan farmers
for a better Minister of Fisheries & Oceans
A 2 year old from Fort Chipewayn could choose far better options for Resources
I'd rather have a fisherman in charge of Finance or Agriculture
Surely an unemployed BC mill worker would be better in Defense
and a recent immigrant from the Punjab or sub saharan Africa
could do better at Immigration, even if they just arrived or were enroute
Give me a 20 year old steelworker for Environment
who has to breath carbon, dust and fumes

Oh Canada .. This government hates you ....
and they certainly can't like themselves
unless they truly are a collection of sociopaths

Thank you for your open, gracious, fresh,
intelligent Canadian views and horizons NR
We need many more, just like you ...

They really are a sorry lot, aren't they, salamander? But, then, you'd expect someone like Harper to attract these kinds of folks to his tent.

It is, however, a pretty small tent.

Jordan must get awfully tired of seeing his work attributed to Alex.

These politicians are ignorant but a lot of Canadians refuse to read, think or talk about anything even slightly serious and prefer politicians that they can identify with. Rob Ford is a man of the people, God help them, but David Miller is an elitist - he is capable of reading a book. This fashion for ostentatious and aggressive ignorance is a disaster for democracy and a gift for dictators.

Thomas Jefferson knew that democracy was doomed unless the people were educated, Fighting. He had his faults; but he founded the University of Virgina based on the firm conviction that democracy and education went hand in hand.

I'm sure he'd be appalled by what is happening these days -- on both sides of the border.

OK. Now I see the connection. I wonder if that has been a problem in the past?