Posing As A World Leader 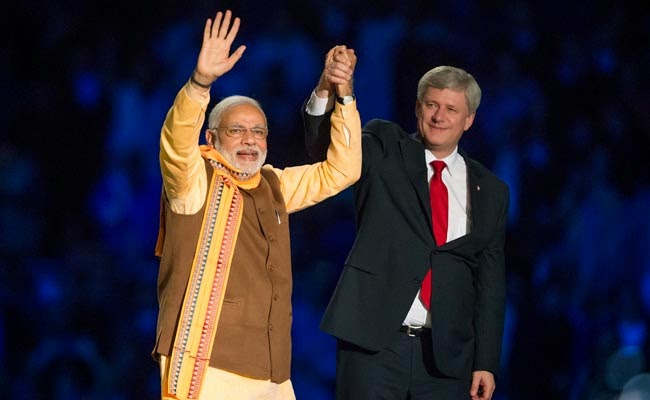 Take a look at the receiving line at the airport in Toronto and Vancouver for Modi.

There you will find Conservative MPs with some of the largest Indo-Canadian populations shaking hands as the cameras whirred.

Kyle Seeback of Brampton West, where 27,000 residents claim South Asian heritage, was there. In Vancouver, there was Nina Grewal of Fleetwood—Port Kells, where 22,000 residents list their country of birth as India, and Wai Young of Vancouver South, where up to 15 per cent of the population is from India.

And, Harper continues, it was no accident that the last leader to address Parliament was President Petro Poroshenko of Ukraine:

who publicly thanked Harper for his support in his address last September.

The Ukrainian diaspora in this country is roughly equivalent to the Indian diaspora — about 1.2 million — and it can swing at least 10 Canadian ridings.

We are told Harper’s Israeli support is a question of morality, his Ukrainian support is aided by a longtime suspicion of Vladimir Putin, and his embrace of Modi rooted in years when the Indian leader was shunned by many in the international community

The Conservatives swept Brampton ridings in 2011 and having incumbents smiling in photos with Modi will not hurt their re-election chances.


The "economist" whose economy has tanked is now posing as a "world leader."

"World Leader"? My ass he more like a chameleon a person who changes their opinions or behavior according to the situation.

That that that is Harper folks...

Too bad so sad love dad.

Watch this backfire, as it usually does with most things Dear Leader touches.

India is either going to turn around and use the uranium for developing more bombs or somehow lose track of the uranium and it somehow ends up in the wrong hands.

I am surprised the Americans have not said anything about this. I believe Modi was not a popular guy with the U.S. but perhaps he has been rehabilitated?

Whose intelligence do these harperian charlatans plan on assaulting and insulting next.

Their shrinking base of aging western Diefenbaker 'progressive' conservatives were the first to have their intelligence insulted by these pretenders until of course they turned their backs on those stalwart grain and beef farmers, so too they abandoned our beleaguered war veterans and let their entire base crumble to ashes from neglect.

So now the plan is to insult the intelligence of those they deemed for so long to be 'lesser' beings by parading around with questionable 'other' country notables, hoping desperately that their love for the country they fled will overwhelm their reasons for leaving and in a gushing wave of misplaced patriotism endorse this wonderful entity that wants to change our country just for them.

This desperate and disparate flailing belies a deeply rooted fear that the end may be nearer than they would like for these despicable manipulative miscreants.

There is an undertone of desperation in everything they do these days, ron.

International repercussions are the last thing from Harper's mind, Anon. This is about buying votes.

Ron, Harper can insult the intelligence of farmers and veterans till the moon falls from the sky and enough of of them will still vote for his party to confirm their lack of intelligence.

It's a cosmic mystery.

My father would have sat down and cried yesterday when he learned the fate of the Wheat Board. Obama's comment about Harper: He's shifty. He's never standing where his thoughts seem to come from. Preston Manning's comment: Stephen harper has no respect for words. In other words he lies like a sidewalk. He's on soft ground with Modi because Modi, when he was governor of his province allowed thugs to persecute Christians and Muslims and any others they didn't like. Not reported by our msm.

What's happened to the Wheat Board follows the Neo-Conservative Playbook, Anon. They sell off public assets to private interests.

Obama knows who he's dealing with.

Following up on the comment regarding Conservatives in the line. Check out Jason Kenney in the video.

What's frustrating is that this charlatan has effectively picked another fight with yet another country, this time Pakistan. By funding and promoting the uranium supply to India, without questions as to the use, Canada has irresponsibly enabled the Indian government to advance ALL of their nuclear programs, including warheads.

It would be an embarrassment if it weren't so frightening.

It's deeply embarrassing, Anon. Harper is willing to add to international instability for the sake of garnering votes at home.

Thanks for the link, Anon. Exactly.

Anon 2:54 PM I had to exit the vid and run to the bathroom to harf and barf. We are talking mass murderers here Modi and Harper pressing hands to secure votes so they can continue to suppress peace sell arms and slaughter innocents.

Where will it end? Ya okay I know already when all life is dead and gone except the 1% and their servants like Modi and Harper. Those two will have a lot more boot licking to do than they do now because they are selfish silly dictator figureheads. But they are so dumb they have not figured that out. Also they are highly expendable at the snap of a 1%er's finger. Sad truly sad.

This is so true, Owen. Thank you for sharing. I linked to your page and the article on my anti harper FB page http://www.facebook.com/harperhastogo Let know what you think.
Cheers.

In most of the videos featuring parts of this tour Harper seems to be following Modi around like an eager little puppy, insecure that some other might enter and occupy the apace between himself and the presiding dog. Beyond pathetic.

It appears there are lots of folks who also think Harper is crazy.

He really is basking in someone else's glow, John.

The hypocracy is breathtaking.

It's all about buying votes at home, Steve. And, in that quest, truth is the first casualty.