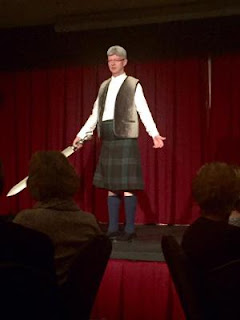 The story of the Harper Party's rejection of Ches Crosbie's candidacy in Avalon tells you much more about Stephen Harper than it does about Mr. Crosbie. Stephen Maher writes:

It is part of the culture of the distinct society of Newfoundland to have a bit of fun, to mock oneself, one’s fellows and, especially, one’s betters, who must either laugh or lose face.

So Crosbie put on a Stephen Harper wig, a kilt, a seal-skin vest, took up a wooden sword and performed the final, bloody scene of Macbeth, in which, in this version, Stephen MacHarper confronts Mike MacDuffy, swearing he will not “yield to one of Senate born.”

“Before my body, I throw my political friends,” Crosbie declaimed. “Lay on, MacDuffy, And damned be him that first cries, ‘Hold, enough!’ ”

Mr. Harper makes jokes at other people's expense. But if there's one thing he won't -- or can't -- do, it's to laugh at himself. And the National Candidate Selection Committee doesn't believe in laughing at Harper's expense, either:

Crosbie didn’t learn that some humourless mainlanders disliked this until Monday, when he got an email from Dustin van Vugt, executive director of the Conservative Party of Canada, informing him that the National Candidate Selection Committee had held a meeting.

“The NCSC has disallowed your candidacy as a potential nomination contestant for the Conservative Party of Canada,” Van Vugt wrote.

There were three reasons, the party said: the MacHarper skit, his role in a lawsuit by Labrador residential school survivors and an innocuous interview he gave to the Hill Times, the newspaper that covers Parliament Hill.


The problem, you see, is that Crosbie claimed he would be an independent voice for the good burghers of Avalon. The Harper Party will have none of that. Maher writes:

I don’t think Harper’s palace guard cares about the Crosbies or about Newfoundland’s tradition of satirical humour.  They care about winning, and they have a script to follow. It calls for candidates to stand silent while Harper stands at centre stage, sternly warning that only he can protect our families from terrorists.

Yet another reminder that Canada is ruled by a paranoid, humourless man. Extending his stay at 24 Sussex would be a grave mistake.

Macbeth is Interesting choice as a vehicle for skewering Stephen Harper, isn't it, Owen? And I guess the rejection of Crosbie's candidacy just goes to show that hell hath no fury like a prime minister scorned.

So Harper hates residential school survivors enough to push Ches under the bus. Whether this was one of the schools where they killed anyone or not ; the survivors deserve legal representation.

Its hard to say which is more horrifying : Harper's hatred towards first nations and his mania for revenge or a PMO stupid enough to put it in writing

The Crosbie saga lays bare the dark heart at the centre of the regime, rumley.

Chaplin's speech at the end of the film is stunning, Dana. He understood leaders who were ego-driven.

When I watch and listen to Harper these days, Lorne, I see and hear echoes of Macbeth. I wonder if Laureen is walking in her sleep.

The last thing Harper wants Owen is an experienced, independent minded MP of Crosbies calibre.I'm surptised that John Crosbie is surprised by Harpers rejection of his son Ches Crosbie. Have they not been watching? The criterion for being nominated as a conservative candidate is full obedience to Harper and unquestioning support of his Neo-liberal agenda. Being appointed to Harpers cabinet, the senate or any other high level position is Harpers reward for that full obedience. Ches Crosbie, has been there, done that and he's not focused on advancing his career at this stage in his life. He doesn't need Harper. Translated , he's not obliged to serve his master. He can disagree and even criticize Harper. Harper and his cronies probably see Crosbie as a loose canon. I can't picture some one in short pants phoning Crosbie and telling him, "this is how you are going to vote and here are your talking points." Crosbies Progressive Conservative roots are seen as a threat to Haroers authority. Harpers conservatives in thinking and practice are actually reform/alliance. Like any dictator, Harper does not want any one who can't follow orders. Actually I would have been surprised if Harper had approved Crosbies nomination.

Tom Walkom wrote today that the Conservative Party is really a cult of personality, Pam. Harper is a throwback to dictators of old. And both Crosbies know that.

that but this blow
Might be the be-all and the end-all—here,
But here, upon this bank and shoal of time,
We'ld jump the life to come: Macbeth

Thou canst not say I did it: never shake
Thy gory locks at me.

There comes time when the ghosts come back to haunt you, zoombats.