A Really Nasty Piece Of Work 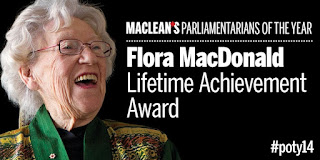 Instead, Status of Women Minister Kellie Leitch will represent the government at the service on Sunday — the day, according to a CBC report circulating Wednesday, that Harper will ask the governor general to dissolve parliament and kick off the federal election campaign.


A lot of other people will be attending:

Former Progressive Conservative prime minister Joe Clark, who made MacDonald his external affairs minister in 1979, is returning from summer holidays in the United States to speak at the service.


You'll notice that these folks are all Progressive Conservatives. MacDonald, like Clark, warned against the Reform takeover of the party. Perhaps that's why Harper acknowledged her passing with a curt tweet which mis-spelled her name.

Harper's reaction merely confirms that there never was a place in his party for Progressive Conservatives. And it shows yet again that he really is a nasty piece of work.

I have to admit that I was surprised by Ms MacDonald's 2012 comment that she votes NDP now. I think it shows that politics in the past was a horse of a different colour. We could recognize people for their qualities that didn't have to label us as dyed in the wool but more open to having an educated opinion. I would find it interesting if someone would chase down Barbara MacDougal and ask her thoughts on the present Government, state funerals, election chances and so forth.

It's interesting to speculate about how old Progressive Conservatives vote these days, zoombats. It's a pretty safe bet that lots of them don't vote for Harper. Then again, you have to wonder how many of them are left.

Harper's classless refusal to attend the funeral shows that for him, some things, like his rabid ideology and vindictiveness, transcend even death. All Canadians should be disgusted.

Absolutely true, Lorne. His visceral hatred extends beyond members of the Liberal Party. He carries his hatred of those he considers his enemies beyond the grave.

The emperor has not had his clothes for awhile now Owen and what we are seeing is this "nasty piece of work", a perfect description of Harper.

In past elections, he dressed in blue sweaters and cuddled with kittens, Pam. He's now prancing about naked, thinking he'll make a favourable impression. He's obviously been looking at himself in the mirror for too long.

I think Flora would have preferred it that way, Owen, especially with a general election looming. The idea of her funeral providing Beelzebub another campaign photo op probably wouldn't have been to her liking.

I suspect you're right, Mound. I've heard Brian Mulroney has left orders that, if Lucien Bouchard shows up at his funeral, proceedings shall stop until Bouchard is escorted out of the congregation.

I imagine that, if she foresaw the possibility of Steve attending the service, Flora would have left similar instructions.