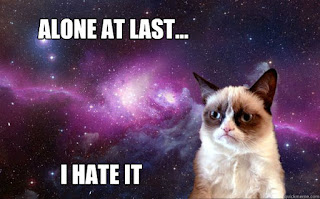 Stephen Harper's allies are abandoning him. At last count, 46 of the 166 Conservatives who rode into Ottawa in 2011 have left the Harper stable. Andrew Coyne writes:

It isn’t just the half-dozen ministers who have, just months before the election, announced their retirements, in some cases (John Baird) without so much as a day’s notice, in others (James Moore) without a word of acknowledgment from the prime minister. It isn’t the two dozen other MPs who will not be running again, or the notable absence of star candidates among the new recruits.

It is the palpable sense of other ministers maintaining their distance, in rhetorical terms at least, unwilling to indulge in the harshly partisan attacks he demands of his subordinates. The undying loyalists, the ones whose careers he promoted on just this basis — the Pierre Poilievres, the Chris Alexanders — will stick with him to the end. But that is pretty much all that remains, a dwindling palace guard of zealous staffers and the callower ministers. “The Harper government” used to be a branding exercise. It is now an almost literal description.


Harper has become, in Michael Harris' phrase, a Party of One. The numbers are bad and they keep getting worse:

Averaging the polls together, the ThreeHundredEight.com poll-tracking website shows the Tories sliding steadily all through the last two months, from a pallid 32 per cent at the beginning of May to a dismal 29 per cent at the end of June. Worse, only about five to seven per cent of non-Conservative voters would consider them as their second choice. 60 per cent of voters tell EKOS the government is moving in the wrong direction, versus just 32 per cent for the contrary.


Still, the folks in charge say it's steady as she goes:

The strategy is to stay the course, make no sudden moves, until voters return to their senses. Yet there are distinct signs of jitters in Conservative central command. Recent days have witnessed a pro-Harper political action committee launching and shutting down in the space of a week, followed by the production of an anti-Trudeau attack ad so grotesquely over the top — it features photos of ISIL victims just before their execution — it had even stalwart Tory supporters denouncing it.

Only the true believers are left -- and their numbers are dropping. Mr. Harper may, indeed, find himself alone at last.

Alone against a wall wearing a blindfold while he waits for the fusillade would be my favoured position for the treasonous bastard, with Polievre, Alexander and a few others standing in line awaiting their turn.

Looks like the Eastern Elites are - again - forgetting what Christy Clark did in BC 2 years ago.

The playbook is public, and Harper is following it to the letter.

Alot can happen in the next three and a half months, Anon. Harper's demise is not a fait accompli. On the other hand, his triumph is far from assured.

I wonder if Harper has ever read Shakespeare, Owen. I probably used the following quote from Macbeth in response to one of your earlier posts, but it seems timelessly applicable to Herr Harper. It occurs near the end of the play, when the tyrant sees 'the writing on the wall':

My way of life
Is fall'n into the sere, the yellow leaf,
And that which should accompany old age,
As honor, love, obedience, troops of friends,
I must not look to have, but, in their stead,
Curses, not loud but deep, mouth-honor, breath
Which the poor heart would fain deny and dare not.

One wonders, Lorne -- to carry the Macbeth meme a little further -- if it has dawned on him that what he says these days is "a tale told by an idiot, full of sound and fury, signifying nothing."

Not sure Owen whose advising Harper, but advertising 101 says Ads have an emotional component to them. People have certain feelings when watching an Ad. The Ad showing Harper alone conjures up a feeling alright. A feeling of desolation.The fact that they let that Ad and their ISIS anti-Trudeau Ad shows how out of touch they really are.

The fact that they nixed the candidacy of John Crosbie's son suggests that they really are living behind barricades, Pam.

.. the Andrew Coyne article holds an interesting tidbit.. possibly the first and only mainstream mention that the James Moore sudden departure was met with stony silence.. no platitudes such as Baird or MacKay received.. nada, nothing.. ot seems.

Floating out there of course is the Frank Magazine expose re #ridemewilfred .. Minister Moore of course is alleged to be Wilfred of the alleged sexting escapades.. a dreary infidelity tale, certain to victimize any wife or child exposed to the scandal..

Methinks the alleged behavior is old news to the Ottawa press.. the story not new.. just the changing procession of partners & names and the facts going unreported to spare the family victims..

.. the Macbeth references.. both exceptional .. !

I suspect that Harper Inc. has a lot of skeletons in its closet, salamander -- which will eventually come to light.

Ya Owen that is why he is desperate to hang on to power while in power he can squash investigations. Out of power he is just another has been that is fair game anyone can plunge into his deep dark secret closets if they can bear the putrid smell.