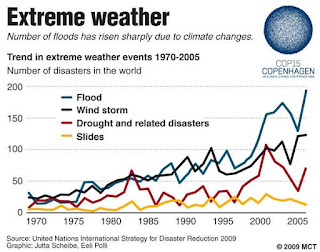 David Suzuki writes that we live in a warmer world -- a world in which extreme weather is a fact of life. The evidence just keeps piling up:

Several recent studies indicate a clear connection between increasing extreme weather and climate change. One, by climatologists at the National Center for Atmospheric Research in Colorado, looked at rising global atmospheric and sea-surface temperatures, which have increased water vapour in the atmosphere by about five per cent since the 1950s. According to the paper, published in Nature Climate Change, "This has fuelled larger storms, and in the case of hurricanes and typhoons, ones that ride atop oceans that are 19 centimetres higher than they were in the early 1900s. That sea-level rise increases the height of waves and tidal surges as storms make landfall."

A Stanford University study found, "accumulation of heat in the atmosphere can account for much of the increase in extreme high temperatures, as well as an average decrease in cold extremes, across parts of North America, Europe and Asia," but also concluded the influence of human activity on atmospheric circulation, another factor in climate change, is not well understood.


Pope Francis' recent encyclical is a call to action, as was Sunday's march for Jobs, Justice and Climate in Toronto. Suzuki writes:

Even though many world leaders recognize the problem, the recent G7 agreement to decarbonize our energy by the end of the century is a horrifying joke. None of today's politicians making the commitment will be alive to bear the responsibility for achieving the target, and the time frame doesn't address the urgent need to begin huge reductions in fossil fuel use immediately.

Governments at the provincial, state and municipal levels have led the way in finding solutions. Now it's time for national leaders to finally demonstrate real courage and foresight as they gear up for the Paris summit later this year.


Climate Change must be front and centre in the next federal election campaign.

Email ThisBlogThis!Share to TwitterShare to FacebookShare to Pinterest
Labels: Government And Climate Change

If it's climate change that rules your vote, Owen, then welcome aboard.

There's no future and no justice unless we do something about it, Mound.

But Owen we are having a cool summer in Ontario, I believe that indicates the planet is cooling. I blame the Liberals for tearing down the Coal plants that used to keep the summmers warm and full of particles.

Someone must have given you a peek at the Harperites next attack ad, Steve.