He Really Does Think We're Stupid 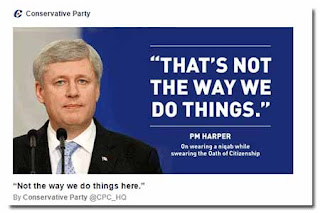 The government is already fighting a court case brought by a Vancouver lawyer, Aniz Alani, who argues that Mr. Harper’s refusal to appoint senators over the past two years, and the PM’s statements that he doesn’t see any need to fill the vacancies, amounts to a breach of his constitutional duty. The Constitution states that the Governor-General “shall” appoint senators, and by convention, the viceroy only does that on the advice of the PM.

In that case at the Federal Court, the government has been filing materials to back up an argument that Mr. Harper is delaying appointments, not refusing them. They include an affidavit from McGill political science professor Christopher Manfredi, who declared that there’s no constitutional convention that dictates how much time PMs have to appoint senators, and they can take their time. But refusing to appoint senators?

“Certainly, at some stage, senators have to be appointed,” Federal Court Justice Sean Harrington wrote in May, when he rejected the government’s motion to dismiss Mr. Alani’s case. He noted that if there were less than 15 senators, the required number for quorum in the chamber, Parliament could not function. (Mr. Alani argues the Constitution requires Mr. Harper to appoint senators, and refusing to do so defeats constitutional provisions guaranteeing levels of representation to provinces.)

But he's gone one step further. The provinces, he says, are responsible for the whole mess. Until they can get their act together, there will be no appointments. This from the man who has never met with the provinces to discuss Senate reform  and who -- for the last six years -- has refused to meet with the provinces at all.

It's typical Harper balderdash -- shift responsibility. There is, you know, no made in Canada recession. It's the fault of international markets. He really does think we're stupid.

Email ThisBlogThis!Share to TwitterShare to FacebookShare to Pinterest
Labels: Harper On the Senate

Oh, he knows for a fact just how stupid enough Canadians are. Somehow his proto-fascist government has the apparently unwavering support of around 30% of our fellow citizens. So that's how stupid they are. They'd probably continue to support him if he opened up barbed wire camps and carted off their neighbours. Oh, it's just a vacation camp, they'd say, it'll be fun.

Then all he needs from there are another 4 or 5 points worth of stupid people to swallow his shit so he can squeeze up the middle between the dippers and the libbies. Who between them have enough stupid people to sufficiently split the vote and give him the mandate to finally implement his final solution and dismantle the country thus obviating the hated Constitution and an even more hated Charter of Rights and Freedoms.

Then the helmeted weasel, his wench and offspring can decamp to Texas and live like well armed royalty for the resyt of their lives.

He certainly knows how stupid his base is, Dana. He keeps playing to it. And, if the rest of us don't see the Lie he represents, we will all soon live in the Kingdom of Stupid.

You title says exactly what I thought when Harper declaredd his boycott, Owen. It is as if he thinks he can rewrite his own sad history of appointments by making this announcement.

I don't know what tale he is preparing to spin when Nigel Wright takes the stand in the Duffy trial in about two weeks. But then again, I understand that Wright is an avid jogger. Given that he has already been thrown beneath its wheels, let's hope he isn't struck by the bus before he can testify.

Harper suffers from the delusion that, if he can make history, Lorne, he can also re-write it. It is the same fallacy which many men -- those who are taken with their own image -- believe.

Although many folks think Nigel Wright's testimony at the Duffy Trial will be detrimental to Harper, I'm quite leery of its usefulness. There are those deep rooted Swartz/Onex/Conservative connections that do not want to bite the hand feeds them. These connections are very similar to the White House/Wall Street links where the corporate class remain in complete control, regardless of their known misdeeds.

I think we can assume that Harper's corporate bagmen will do whatever they can to keep him alive, Anon -- unless they decide that he has outlived his usefulness.

Harper is getting a lashing eh?

He deserves one, Anon.