He Says He's Doing It For The Kids 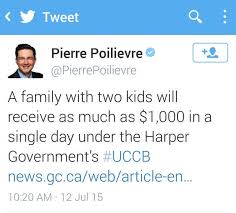 Nothing the Harper government does is surprising anymore. The National Post reports:

Number-crunching based on the last census shows that many of the ridings in line to get the biggest cheques from the newly increased Universal Child Care Benefit are in suburban Alberta and the all-important ridings that surround Toronto — and they usually have a history of tilting Tory.


The increased payments are retroactive to the start of the year, meaning the payments this month will be higher than any before: up to $520 for children under six, and up to $420 for every child six to 17.

The government doesn’t decide where in the country the money will go; it does get to decide who should receive the money.

To get a more detailed picture of where those families live, The Canadian Press used census data from Statistics Canada to plot the location of children under age 18 in each of Canada’s 338 ridings, and then calculated how much each riding would receive in new monthly child care benefit spending.

The analysis then used an Elections Canada study that transposed the outcome in each of those 338 ridings based on the poll-by-poll breakdown of votes from the 2011 campaign. (In 2011, there were just 308 ridings, so Elections Canada has done number-crunching to figure out who would have won if the 338 ridings had exited in 2011.)

The analysis showed that the highest grossing ridings are most likely to be in the 905-belt around Toronto, as well as the suburban areas of Calgary that supported the Conservatives in 2011.


And who is beating the bushes for the Universal Child Care Benefit? That Master of Democratic Reform and Fair Elections -- Pierre Poilievre:


Brazen self interest. And Poilievre says he's doing it for the kids.

Email ThisBlogThis!Share to TwitterShare to FacebookShare to Pinterest
Labels: The Universal Childcare Benefit

At least we get to decide in Oct.

And it will be a very important decision, Steve.

And this is certainly illegal :

Laws are for others, Alison -- not for these folks. As Dean Del Maestro told us, they are judges' opinions.

When will it become clear that we have a brainless brain dead government? I could never ever get away with this $hit babies in Canada starving bombs dropped @ $100,000 a pop not making any headway and the support for these illegal bombing raids is astronomical makes the bombs the cheapest part of the bandit harper's raid...

Let's turn Canada Orange and see what they are made of? Better than harpo anything is 'cept Pot Pol...

If the polls are correct, Mogs, you just might get your wish.

Having read both your column and your National Post source I steeled myself and read aloud, "Families in stable federal Conservative ridings will receive most of new child care benefit: Analysis." to my nearest and dearest. What I got was total denial. The program applies to those with small children wherever they are; end of conversation.

The inability of most Canadians to conceive of a government as devious as this one leaves us right where we started with Harper. It is very likely that he will get re-elected, maybe with another majority, simply because people don't believe he and his crew are as bad as they are.

Harper's ally is Ignorance, Toby. His most powerful ally is Willful Ignorance.