Keeping It Under Wraps 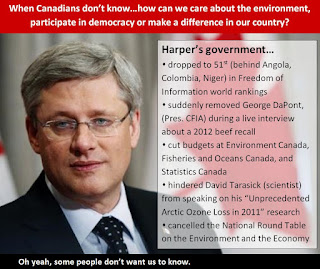 Last week, the Advisory Panel On Healthcare Innovation was supposed to release its report at a scheduled news conference. Jeffrey Simpson writes:


The day before the news conference, however, the PMO cancelled it and decided to release the report without notice on the Health Canada website on July 17. Just as the PMO hoped, the report received little attention.

Health Minister Rona Ambrose, who was to have spoken about the report, was gagged. The posting on her department’s website was timed so that it appeared only after the provincial premiers had finished their final news conference in St. John’s, in case the report gave any or all of them ammunition to embarrass the federal government. Such is the way this government works.

As with everything else, when the news is not what the government wants, it buries it. In this case:

The panel’s mandate read that recommendations “must not imply either an increase or a decrease in the overall level of federal funding for current initiatives supporting innovation in health care.”

The Naylor panel ignored the mandate, explaining in its report that “although it was not an easy decision, we did not follow this guidance.” Later, it warned that “absent federal action and investment, and absent political resolve on the part of provinces and territories, Canada’s health-care systems are headed for continued slow decline in performance relative to peers.”

To that end, the panel recommends creating a Health Innovation Fund with a $1-billion yearly budget to invest in changes to the health-care system in conjunction with willing provinces and health-care institutions.

An extra one billion dollars a year for a government obsessed with balancing the budget? That news couldn't hit the fan:

For 2017-18, the federal government has announced it will reduce the increase in Ottawa’s annual health-care transfer to the provinces from 6 per cent to something in the range of 3 per cent to 3.5 per cent, depending on economic growth. The provinces would likely not appreciate losing money from Ottawa with one hand, and then getting some, but only some, of it back through the Innovation Fund.

The Harper government was hoping for change-on-the-cheap from the panel: innovation that would cost nothing but improve the system. It certainly has no interest in an expanded, direct federal role in health care, having made it abundantly clear that health care is for the provinces, except for Ottawa’s responsibility for aboriginal and veterans’ health, public health and drug approvals.

The man who used to run the National Citizens Coalition -- which was founded specifically to oppose public medical care -- did not approve.

So, what else is new?

The government we deserve and we're well on the way to deserving it again.

I heard on the CBC news last night, Owen, that Harper has facilely suggested that if the provinces find the federal funding inadequate, they can do one of two thing: either increase taxes to cover the shortfall in medicare (something he knows they will not do) or cut services. I'n sure the latter is that neocon's preferred option.

The former director of the NCC is determined to get rid of medicare, Lorne -- incrementally.

Owen said, "The former director of the NCC is determined to get rid of medicare, Lorne -- incrementally."

Absolutely. I've been telling people that ever since Harper got elected in Calgary. Not only do most of the people I talk to dis-believe me, they think I'm one of those conspiracy nuts because Harper would never do that. The really sad part is that veterans and people on joint replacement waiting lists and others who really depend on the health care system will still vote for Harper and the Cons because they "don't want to vote Liberal and there are no other parties." I've heard that so many times it is tattooed on my brain.

Harper's using the frog in the boiling pot approach, Toby. He figures that, if he gets rid of medicare a little bit at a time, people will never notice. Perhaps he's right.

McMartin figures that redistribution will work in Harper's favour, Dana. He figures that Conservative ridings that are split will be two-fers for the Harperites. I live in one such riding. In my riding, the Liberal candidate is the former mayor of Belleville.