The Imitation Of Who? 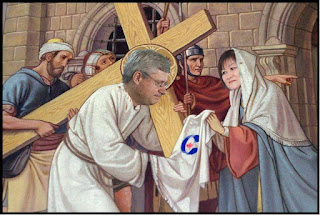 Two weeks ago, Conservative MP Wai Young told the congregation at the Harvest City Church that, when he pushed through Bill C-51, Stephen Harper was walking in Christ's footsteps. All analogies eventually break down. But this one never even got out of the gate. That's why Michael Harris has so much fun with it:

Sorry, Wai — the case for Steve being Christ-like is not compelling. It’s like comparing Donald Trump to Mother Theresa, or John Baird to Gandhi.

For one thing, Steve was born in a hospital, not a manger. For another, I think you would agree that Jesus Saves, while Steve spends and spends and spends. Seven years to record a balanced budget of his own — and even then he only managed it through the tawdry tactic of robbing Peter to pay Paul.

Jesus could feed the multitudes with a few loaves and fishes. Steve needs the federal treasury and $8 billion of taxpayers’ money to buy a measly election.


And, given some of Harper's disciples, the comparison verges on the obscene:

Jesus had disciples who later went on to great things. Steve had accomplices who found their way to court with astonishing regularity. Instead of Mathew, Mark, Luke and John, Steve had Arthur, Peter, Bruce and Dean — confidantes and advisors who were persons of interest to the police. Some even made it to the handcuff-and-shackle set. No wonder Steve wants to build more prisons.


In the end, there are more differences than similarities between Christ and Harper:

As for forgiveness, Steve believes that vengeance is his, no matter what the Lord sayeth. Just ask Helena Guergis, Mike Duffy or Tom Flanagan. Never mind the New Horizons probe and all those NASA snaps of that frozen meatball on the edge of our solar system; Flanagan was the first to orbit Pluto after raising the ire of Steve. Jesus forgives. Steve consigns trespassers to the outer darkness.

In Oct. Owen, let's give him his last supper.

I read the entire Harris piece this morning Owen. Thanks for the link. I have to say that whenever I see a picture of the "Right Honorable..." I get a sickening feeling and am prepared to have my day ruined. I recall a West Indian friend who once said " have a dream about(fill in the name), expect a disappointment". One thing I have come to believe, after viewing the photo, is you can in fact put lipstick on a pig and mascara.

I'm sure there would be lots of people gathered around the table to witness the event, Pam.

That's the Conservative election strategy in a nutshell, zoombats.

We need more of these across the country not necessarily Green and Liberal but whomever can beat out Hay-Zeus Harper's con...

I agree, Mogs. It's going to take strategic voting to get rid of Harper.

So if Steve's supporters can compare him to Jesus, his detractors should be able to compare him to Satan without the expected whining about it being below the belt, eh?

Seriously, though, did you notice that PMO did not come out immediately to distance itself from Wai's outrageous/stupid remark?

Which suggests that this analysis that she had flubbed PMO talking points aimed to solidify the Evangelical votes may have some merit: http://albertapolitics.ca/2015/07/mp-wai-youngs-lines-were-flubbed-but-nevertheless-they-sound-like-a-cynical-harper-government-talking-point/

I agree, Anon. If you really want to know what Harper's base is like, I'd suggest that Young's analysis -- if you can call it that -- offers a great deal of insight into who they are.