They Don't See Much 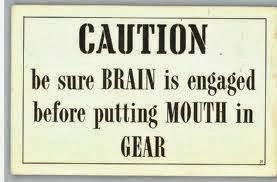 The Harperites want to build a monument to the "victims of Communism." China is one of the last officially communist countries. Yet Mr. Harper and  Rob Nicholson, his Foreign Affairs Minister, have taken a curious approach to China.

China has been cracking down on human rights activists for some time, writes Jonathan  Manthorpe:

The crackdown on human rights activists has huge implications. The emergence of this group over the last 10 years represents the most serious threat to the survival of China’s one-party rule since the nationwide student uprising of 1989. The severity of Xi’s response to the rising influence and popularity of these lawyers, and to their role in countering the corruption and arbitrary power of party officials, is a clear indication of the threat he believes the movement poses. The purge undoubtedly will taint Xi’s planned visit to Washington in September — another indication of how seriously he takes the threat of the human rights movement.

Yet the near-silence on the persistent and widespread human rights abuses committed by China’s Communist Party stands in sharp contrast to Nicholson’s regular blustering about the iniquities of Russian President Vladimir Putin. This week, we learned from the CBC that Nicholson is demanding that his staff produce a steady diet of fear-stoking statements about terrorism in the run-up to October’s election — the apparent aim being to blunt criticism of the C-51 ‘anti-terror law’.


One wag recently quipped that Mr. Harper's foreign policy was "all mouth and no brain." In fact, what is true of Harperite foreign policy is true of all Harperite policy. Harperites claim their policies are cast in stone, while they continue to spout hot air.

Stone, yes. They are immune to deep and careful thought. They have no time for root causes. But they have committed all kinds of time and resources to communicating drivel and untruths. They only see what they want to see. And they don't see much.

Email ThisBlogThis!Share to TwitterShare to FacebookShare to Pinterest
Labels: Harper On China

just when you think the harper-cons hit rock bottom of dishonest government they stoop lower still...