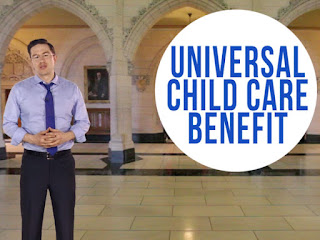 This week, Pierre Poilievre made sure that the public saw him handing out cheques. Michael Harris writes:

There he was, in all his obsequious glory, standing beside the massive press run of the expanded Universal Child Care Benefit outbound cash flow. It looked like a reprinting of the Oxford English Dictionary, so thick were the sheaves of cheques. One hundred and sixty bucks a month for kids under six — and a brand new $60 a month for those 6 and over. Mind the fine print; the UCCB is taxable in the case of the lower income spouse. All is never quite what it seems to be in Harperland.


It's not a new strategy. It's been Standard Operating Procedure for a long time:

The hijacking of public money for private political use is not new with this crowd. You will recall that the Harperites actually posed beside giant ceremonial cheques bearing the logo of the Conservative Party back in 2009.

MPs like Colin Mayes, Larry Miller and James Bezan all tried to take political ownership of government funding cheques. The message was clear. Remember who butters your bread, forgetting it seems, that both this bread and this butter are publicly owned.


And, of course, there is that one billion dollars that has been spent on "public service announcements:"

Here is another one. The Harper government has spent nearly a billion public dollars in party advertising thinly disguised as public service announcements. It is a scandal much bigger than Ad Sponsorship, and includes the obscene costs associated with the PM’s nauseating photo-ops. That’s where the already-announced gets announced again and again, and then re-announced by lesser mortals at smaller PR events across the country.


It's all about buying votes. The Mike Duffy trial has made abundantly clear that, in Harperland, you can be charged with accepting a bribe, but nobody will offer you one.

Polievre is the personification of backpfeifengesicht.

You've used that phrase before, Dana. And he continues to live down to it.