We Deserve An Explanation 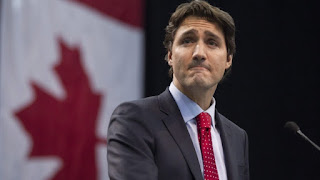 Justin Trudeau's support for Bill C-51 is one of the reasons his credibility is slipping. That support was not unqualified. He and his party, he said, would:

“narrow and clarify the overly broad scope of the new powers” for CSIS, create a parliamentary committee to oversee the security agencies, and put the bill up for parliamentary review the bill within three years."


That was pretty thin gruel. And he has paid a price for his vague suggestions of reform. Steve Sullivan writes that it's time for Trudeau to lay his cards on the table:

He has to tell us what he’d do — to lay out his own vision, one based on facts. Fighting terrorism requires a combination of security, the Charter of Rights and, yes, sociology. Trudeau has to offer a robust defence of the rights and freedoms undermined by C-51. He has to argue forcefully that these freedoms make us stronger as a society, not weaker — and that no terrorist is going to take them away from us.

But if he really wants to take the initiative here, he has to be honest with people about the real nature of terrorism. There will always be terrorist threats — we live in that kind of world — but Canada is still the kind of place where we face far graver health risks from sugary soft drinks than from any lone-wolf jihadis. Trudeau has to be up-front with us and state what ought to be obvious: no law can ever protect us completely, and the quest for absolute safety risks destroying the things that make us a free people.


The Harper attack machine will be merciless. But that's a given. Without details, Trudeau looks and sounds like he listens to his advisors because he's not his own man. And, without an explanation, we can only assume that he isn't his own man.

Email ThisBlogThis!Share to TwitterShare to FacebookShare to Pinterest
Labels: Trudeau On Bill C-51

Tudeau is his own worst enemy here, Owen. His support of Bill C-51 suggests that his words about a 'new way of doing politics' is simply empty rhetoric attempting to mask the fact that little has changed in the party that considered itself Canada's natural governing party for so long.

Good point Owen. Unless Trudeau shows that he can be his own man, admit he made a mistake, and promise to revoke C-51 if elected, then he is going to lose votes. Personally, it's orange or green for me now.

Your comment explains precisely why Trudeau is in trouble, Anon.

Ignatieff's support for Harperian legislation was the kiss of near death for the party, Lorne. You have to wonder if the threat of hanging has concentrated the Liberal mind.

The great Canadian electorate has no right to any explanations. We surrendered that right 25 or 30 years ago. We don't demand honesty from our politicians and we tolerate dishonesty from our media. The one time in our recent history when a senior politician attempted to deal honestly with the electorate of Canada he, and his party, were roundly condemned and turfed out of office for it while simultaneously demonstrating to all political types that a Royal Commission is never to be called, for any reasons whatever.

I agree that we get the government we deserve, Dana. But I still believe that, if we demand better government, we'll get it.

I'm afraid you're right Owen. I've got the sense that in the last 6 months or so that he's been held back and for the most part told to not speak without advice. It is the powers that be in the liberal party that were hearing, not Trudeau. Better to be his own man, warts and all, then someone else's lackey.

Precisely, Pam. If Trudeau is perceived as taking orders rather than giving them, he'll never become prime minister.

It was telling of the character of Trudeau Jr., Owen, that he openly admitted he backed C-51 out of fear of what might befall him at the hands of Harper if he didn't. He was so cowed by what he saw as his personal political exposure (a miscalculation of epic proportions) that he put his party's interests not just ahead of but in opposition to the public interest. It was a spineless, craven act and it played out that way in the eyes of a Canadian public looking for a strong leader.

You can see Trudeau's handlers at work, Owen. It just drives home how little of Pierre lives in Justin. What Justin is doing to the party of Laurier, St. Laurent, Pearson and his father reminds me of nothing so much as what the Eaton kids did to Timothy's store.

Trudeau? Appears to be a vacuum and an echo chamber all at once when his controllers fart he burps not leadership material Harper's attack ads on the Trudeau had that part right but Harper himself is even less qualified to be PM. Also Paul Jr. and Andre Desmarais sons of Paul Sr. still have manipulative ties to the federal cons the NDP and the liberals so no matter who you vote for the ruling party of Canada still wins 'The Desmarais Family Mafia' this upcoming election is more like a game of Russian roulette...

"Mr. Desmarais had a reputation for befriending the political elite, but those personal connections ran deeper: His family was connected to heads of state through work and marriage. Mr. Desmarais’ son André married the daughter of former prime minister Jean Chrétien, and the couple have four children together. Mr. Desmarais was also close with former prime ministers Brian Mulroney and Paul Martin, both of whom worked for Power Corp. before entering politics. (Mr. Chrétien also sat on the board of a Power Corp. subsidiary.) A former adviser to Mr. Sarkozy was once married to Mr. Desmarais’ daughter, Sophie. Mr. Sarkozy said in 2008: “If I am the President of France today, it is thanks in part to the advice, the friendship and the loyalty of Paul Desmarais.”"

trudeau mulcair and harper are no exceptions...

There's no doubt that politics and money are joined at the hip, Mogs. It's getting harder and harder to find politicians who are not servants of the wealthy.

That's a telling analogy, Mound. And it says a great deal about our bankrupt politics.

Mound he is not cowed as you say he is merely sucking the teat...

Is that not obvious? He can never fill dad's shoes eh?

Trudeau Jr.s worse than Harper or Mulcair either way with these kowtowing [to the 1%] idiots we loose...