A Not So Brave New World 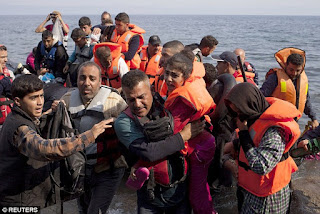 The world is being overwhelmed by Syrian refugees. And it's easy to lose sight of what's really happening in the Middle East. Rouba Al-Fattal writes:

Most world leaders and analysts have argued that a common Western strategy is needed to end the crisis. In the quest for that common strategy, Western policy-makers deliberated for months and came up with a beautiful road map for Syria. Russia came up with a road map of its own. The gist of both proposals is to seize fire, come together at the negotiation table, set up a committee to draft a new constitution, reform some political and economic elements, run a referendum, call for presidential and parliamentary elections and — hopefully — live happily ever after.

It’s such a nice fantasy — but it’s a laughable effort on both sides. How often can we forget our history? Did the road map for the Israeli-Palestinian peace-process lead to a two-state-solution? Did the road map for postwar Iraq lead to peace and stability? Why should this experiment be any different? How many road maps can we draw for people who don’t want to go anywhere? Let’s get real — unless this plan belongs to the people directly affected by the war, it’s not worth the paper it is printed on.


We're in a new world, Al Fattal writes, where old alliances have dissolved and new ones are being forged:

From a European perspective, Russia can provide the needed stability in Syria — which is why French President François Hollande, German Chancellor Angela Merkel and Russian President Vladimir Putin have recently been seen cozying up to each other. We shouldn’t be surprised to see the European leaders softening their stance on Russia and giving some concessions on Ukraine in exchange for a deal on Syria.

The U.S., fearing a Russian beachhead in Syria that could translate into a stronger presence in the Middle East and new alliances with Europe, had no choice but to intensify its military efforts by sending “boots on the ground” to fight ISIS in Syria — something President Barack Obama had vowed not to do.

But that’s not the only strategic shift the U.S. has attempted. Despite the outcry from traditional allies like Israel and Saudi Arabia, the U.S. recently reached a nuclear deal with Iran. This landmark agreement turns the tables on the existing actors and gives a seat to a new player. The wisdom here is that the United States gains a new ally which should help in maintaining a balance of power against Russian dominance in the Middle East. This new U.S. strategy, which reads like a page from a beginner’s primer on international relations, only helps to widen the rift between the U.S. and Western Europe.


Stability will only be restored to the Middle East after these strategic shifts have been accomplished. Until then, many will die and many will flee. And those numbers will grow the longer the players seek military advantage.

We'll be away for the next couple of days. But I should be back on Tuesday or Wednesday.

Email ThisBlogThis!Share to TwitterShare to FacebookShare to Pinterest
Labels: The War In Syria

The writer seems seriously out of touch.

The Syrian fighting is fueled primarily from the Sunni Gulf despotisms with the permission of the USA.

Russia already has a toe-hold in Syria with the naval base there.

If France and Germany are siding with Russia, which is conducting an actual bombing campaign and assisting genuine anti-ISIS fighters (in contrast to the USA's cynical campaign, exposed as a fraud by Putin who showed the long caravans of fuel trucks leaving ISIS territory that the USA supposedly didn't see for a whole year!) it's either because they are tired of being the USA's chumps, or the Paris attack has shown that the USA-Saudi's mad policies are spinning out of control.

I admit that things could spin madly out of control, thwap. That happened one hundred years ago in Europe, too. But I agree with his argument that the old order in the Middle East -- which was forged at Versailles in 1919 -- will nor longer hold.

For a country that averages slightly more than 250,000 immigrants every year I don't see what all the fuss in Canada is about a mere 25,000 more.

Perhaps it is just the residue of the fear and racism fomented by the previous government.

"seize fire"?
like grip a handful of coals?
cease fire? possibly?
between earth scorching wars and climate change, food insecurity and ecological devastation, and the water wars
we are setting ourselves up
for an endless number of death march migrations
with no valid destinations
book that christmas holiday get away soon

I noticed the odd choice of words, lungta. But I made no edit. However, I still agree the writer's conclusion that the old alliances are dissolving.

Thanks for the link, ron. The table puts things in perspective.

Me for one totally agree with Germany France and Russia Harper's hell in bed with the USA created this mess. ISIS started in Libya where Herr Harper was trigger happy with bombs. Here:

So Mr. Harper has blood on his hands no wonder he used ISIS propaganda films of beheading in his bid for re-election. Now you don't think for a moment I hope that he is not going to sneak ISIS into the country under Trudeau's bid to help refugees? And stage a Paris in Canada? That is his master plan IMHO go figure I honestly hope I am wrong. But given Harper's criminal behavior????

I understand your cynicism about Harper, Mogs. But I doubt even he would stoop so low.