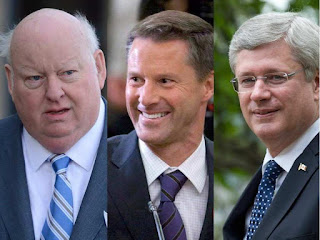 The Duffy Trial recommences on November 18th. It offers all kinds of lessons to Justin Trudeau and his incoming government. Michael Harris writes:

This is a story I have watched, with minor variations, unfold countless times. Whether it’s Arthur Anderson’s accountants lying for Enron, the CBC downplaying the ethical and criminal lapses of its “stars” until that became impossible, or Penn State turning a blind eye to football coach Jerry Sandusky’s sexual predation — it always ends badly.


Michael Higgins, the former President of St. Thomas University, has written extensively about sexual abuse in the Catholic Church. He has applied the lessons he learned to the Government of Canada:

“When you undertake to ‘protect’ the reputation of an institution – in this case the Red Chamber – when you seek to insulate any governing body – in this case the PMO and the Prime Minister – from the taint of scandal, and you do this through spin, sophistical argumentation, and lawyerly legerdemain, any gains are provisional, any result pyrrhic.”

The lesson from the Wright/Duffy Affair for prime minister designate Justin Trudeau and the PMO he will create around him is clear. Canadians were falsely promised transparency and accountability in 2006 and all too often got self-interest and lies from the highest office in the land. The mendacity reached its crescendo with the Senate expense scandal.

With all his great promise, and with every good wish for success coming Trudeau’s way from the voters who just elected him, Canadians now expect a much higher standard than the one offered by Wright’s notion of loyalty in Harper’s PMO.


One hopes Trudeau has got the message.

Email ThisBlogThis!Share to TwitterShare to FacebookShare to Pinterest
Labels: Lessons From The Duffy Trial

So I think instead of an airport or a dump Calgary ought to rename Prince's Island Park in the Bow River downtown Calgary [you know where this is going] to Prince Harper Scandal Park. Next a large statue of Harper in the middle with out-stretched arms. Then pigeon feeding stations on his head and arms. It would instantly solve four problems. First the pigeon problem they wring hands over:

It would give the pigeons a home away from home attracting them away from your home in downtown Calgary. Second solves the what to name after Harper problem. Third the cons that wanted an erection of an edifice to Harper can erect the statue. And lastly put a restrictive covenant on the area around the statue only pigeons allowed and City of Calgary Parks and Recreation personnel to maintain the feeders but never ever clean the pigeon poop off of the statue. Fourth problem solved lesson to all would be politicians that hold the highest office of what happens when you break the law while in highest office because eventually the Harper statue will become a mountain of dung. Just as he and the PMO did backed by spineless wimps that call themselves MP's that were just in Harper's zoo of clapping barking seals. That island by the way is next door neighbor to St. Georges Island which houses the original Calgary zoo. So every time a member of the con caucus dies they could add a statue in memorial beside Harper. Calgary would then boast two zoo's the animal zoo and the dead con zoo eh? Oooh I'm on to something here ;)

You may, indeed, be on to something, Mogs.