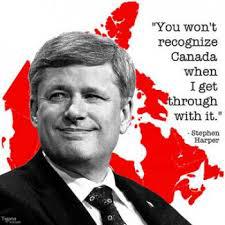 A photo of Stephen Harper, emblazoned with the caption “Miss Me Yet?”, has popped up on the blogs and Facebook posts of some core Conservatives. A new website, strongandfree.org, has declared that Justin Trudeau “is already letting Canada down” and is vowing to “bring conservatism back to Ottawa.”


That's because the mandate letters Trudeau  sent to each of his ministers make clear that the Liberals' first order of business is to undo much of what Stephen Harper did:


Justice Minister Jody Wilson-Raybould appears to have the largest list of Conservative measures to unravel; she’s already announced the move to abandon a court challenge of niqabs at citizenship ceremonies and has been tasked with a wide-ranging review of the past decade’s changes to the criminal justice system. She has also been instructed to restore the old Court Challenges Program and help other ministers repeal bits of the controversial C-51 security law and C-42, the so-called “Common Sense Firearms Act,” which critics said watered down gun control laws in Canada.

Heritage Minister Mélanie Joly will be reversing funding cuts to the CBC. Democratic Reform Minister Maryam Monsef will be taking a hatchet to many provisions in the Fair Elections Act. Finance Minister Bill Morneau will be scrapping income-splitting for families and other “unfairly targeted tax breaks.”

When Citizenship and Immigration Minister John McCallum is done with the task of getting 25,000 Syrian refugees to Canada by year’s end, he also has to repeal provisions in the Citizenship Act that give the government the right to strip citizenship from dual nationals, and also eliminate a $1,000 fee imposed on those who hire foreign caregivers.


Then there are all the things that the Liberals promised to do -- like spending on infrastructure.

Stephen Harper won't recognize Canada when the Liberals get through with it.

Ya he will much to his chagrin it will be more like the Canada he hated before becoming its self appointed immolater....

Some dreams are short lived, Mogs.

Until Trudeau rejects the TPP, as Obama has just told us Trudeau will sign, we may not recognise Canada under him!

Excellent point, Pam. Trudeau most assuredly is being tested.

I thought about this after Owen. Trudeau probably had no control over what Obama said about Canada signing the TPP. I can imagine Obama, head of the biggest Neoliberal country, twisting trudeau's arm to sign. Let's ultimately see what he does. I am very worried though.

I feel somewhat reassured by Chrystia Freeland's comment, Pam. She says she doesn't feel bound to an agreement signed by the previous government. Let's hope she's speaking for Trudeau as well as herself.

After reading this I like Trudeau and crew even more. I'm just disappointed that the Harper-sycophant-Con in my riding got reelected.

Perhaps it will just take a little longer for people in your riding to see the light, Toby.

.. thanks for the timely article .. ! As always, its so refreshing to read & consider perspective & reflection.. rather than the pablum of mainstream headlines. More and more I find myself wondering why 'we' .. ie feet on the ground Canadians .. aren't responding to legitimate refugees or desperate migrants.. as if they are shipwreck victims. We have something to give - shelter & support & encouragement. They bring something with them - eyewitness truth & observation from distant lands & cultures. Their 'Truths' will help shape our 'Belief' and our 'Haven' here in Canada will shape & define their Lives .. This is not about Religion. not about Politics . this is about survival, spirit, the land & its people.. This is Canada eh .. let our hearts glow !

I couldn't have said it better, salamander. We our a nation of refugees. It's only those who have no sense of this country's history -- the narrow and bigoted -- who make religion and politics the touchstones of a person's existence.

Owen, this country's history also contains a very high level of bigotry and narrow mindedness. Religion, politics as well as ethnicity have very often been the touchstones. What we see now is a only a continuation of another, darker side of our history.

I agree, Dana. There was a time when religion -- rather than language -- was the chief fault line in this country. The New Right, once again, has made religion a fault line. And bigotry towards First Nations people has always been there.

One can only hope we're a little better than we used to be.

That's one monstrosity from the Harper Era that we won't have to live with, Steve.