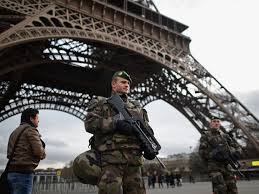 It didn't take long for Justin Trudeau to be tested. On Friday night, the gauntlet was on the ground -- thrown, not by Canadians, but by terrorists in the streets of Paris. Michael Harris writes:

For Justin Trudeau, mass murder in Paris is his trial by ordeal as prime minister. It didn’t take very long. At the end of the month, Paris was supposed to be the glittering venue where a new, young prime minister, and an impressive delegation, would announce to the world that the old Canada is back. No more fossil awards, no more climate change denial on behalf of oil companies or the Koch Brothers, no more corporate-driven “facts” on the environment, no more beating the war drums. Canada was not shaking its finger at the world anymore, but offering an embrace.


But that's the kind of world we live in -- a world where someone else's mistakes come back to bite you. Now the French, unsurprisingly, have vowed to conduct a "pitiless war." But Andrew Bacevich, writing in the Boston Globe, reminds us where pitiless war in the Middle East has gotten us:

“It’s not as if the outside world hasn’t already given pitiless war a try. The Soviet Union spent all of the 1980s attempting to pacify Afghanistan and succeeded only in killing a million or so Afghans while creating an incubator for Islamic radicalism. Beginning in 2003, the United States attempted something similar in Iraq and ended up producing similarly destabilizing results. By the time the US troops withdrew in 2011, something like 200,000 Iraqis had died, most of them civilians. Today Iraq teeters on the brink of disintegration.”


There will be all kinds of pressure on Trudeau to join the continuing March of Folly. He's young. But let's hope he's no fool.

Email ThisBlogThis!Share to TwitterShare to FacebookShare to Pinterest
Labels: Trudeau At The G20

Strange, isn't it Owen, that the world's 'leaders' seem so blind to the lessons of history, especially the ones they learned the hard way? I am at least encouraged that so far Trudeau has given no indication that he plans to change his mind about withdrawing from the combat mission. Let the rabid right-wing howl; nothing is going to change the fact that the Liberals have a majority mandate.

Sometimes I wonder if it's a testosterone contest, Lorne. Military action is sometimes necessary. But if it's taken to prove something, it's a mistake.

The MSM and Kenney can babble on all they want about Trudeau continuing the air strikes in the ME, but it is what the Canadian people think that really matters and Canadians support Trudeau all the way on his stopping the air stikes. For the first time in 9 yrs, we may have a PM who does what Canadians want. I think he will stand strong.

I hope he does, Pam. He said he would end air strikes. He didn't say he'd abandon people in the Middle East. It's not hard to see the distinction.

I am not 'religious' in any way, shape or form (at least in the secular sense), but I have always been intrigued by the story of David and Goliath.

Once we have overcome our fear(s) we can defeat the strongest enemy with a well placed and well thrown response, but then I remind myself of that little Pogo character telling me that he has seen the enemy and the enemy is us.

Fear turns human beings into midgets, ron -- and that's why the enemy is us. But we can choose not to be midgets.

I'm inclined to trust and believe in Trudeau. His positions on this have been consistent throughout his time as leader, and I well remember his tone and vibe when he made the "whipping out F18s" comment, and it was clear he was full of contempt for that approach to fighting ISIS, while his own preference always was for training of ground forces and aiding nations (our regional strategic allies like Jordan, Lebanon, and Turkey who were and still are being overloaded with this problem) with the refugee crisis. I said back then his was the correct approach with the best bang for the buck given our resources and capabilities when this issue first arose, I've seen him hold fast to these convictions throughout his time in opposition and during this campaign, so I am inclined to believe he will continue to do so even with the chickenhawk brigades and Postmedia scum-and-fear merchants trying to force him to do otherwise. A fresh majority mandate is the best rebuttal to those forces IMHO.

I think many people are going to be very surprised at how strong and resolute Trudeau is when it comes to holding to his principles and beliefs here. Sure, he'll end up making some political compromises during his time as PM, but I simply do not see him as weak or the expediency whore we too often have seen in the past with many political leaders, and after Harper in particular that will be a welcome relief. I especially do not see him pandering to chickenhawks, unlike Harper and company Trudeau clearly has physical as well as moral courage to spare, and people like him are not the type that feel the need to chickenhawk, since chickenhawks generally are as they are because they LACK these qualities.

The Right repeated the meme that he just wasn't ready, Scotian. Obviously, they were wrong. For all their noise, they aren't particularly insightful.