Putting The Numbers In Perspective 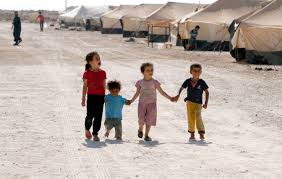 Canadians across the country are getting ready to welcome 25,000 Syrian refugees. In the small community in which my wife and I live, a family of 11 arrived two months ago. But before we begin congratulating ourselves too heartily, Jeff Sallot writes, we should put that number -- 25,000 -- in perspective:

While 25,000 might seem like a big number, it’s still only 10 per cent of the total number of immigrants to Canada in an average year.

On the other hand, 25,000 is two-and-a-half times the number of Syrian refugees the United States plans to admit next year. Now that is shocking.


And, given the number of people who have fled Syria, that number is a mere drop in the bucket:

The UN has registered more than 4 million refugees who have fled Syria for safety. There are at least 1 million more who have not been registered. Inside Syria itself, about 7 million have been displaced by the civil war. Half of Syria’s prewar population has been forced to move.

These are the fortunate few. An estimated 250,000 have been killed in the conflict. For every one refugee who arrives in Canada, ten have already perished.

These three frontline countries rarely offer refugees resettlement, permanent residency or a path to citizenship. The Syrians live in shantytowns on the fringes of cities or in camps, some for more than two years now.

The frontline governments hope a political settlement can be reached in Syria so that the refugees can go home — the sooner the better. Many displaced Syrians reckon they have nothing to go back to. They would rather take their chances on the seas, or wait patiently for a country like Canada to accept them as permanent residents.


There is much more which needs to be done. And now that Vladamir Putin has installed anti-aircraft missiles which can shoot down coalition bombers, the situation could get much worse.

Email ThisBlogThis!Share to TwitterShare to FacebookShare to Pinterest
Labels: The Syrian Refugees

Perspective is a quality of diminished value in the era of messaging and wedge politics, Owen.