Their Coming Enriched This Country 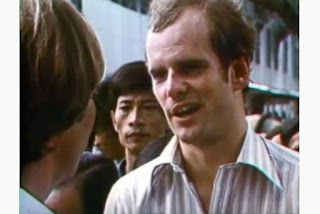 Thirty-six years ago, Canada opened its doors to a flood of refugees from Vietnam. Tim Harper writes on this Remembrance Day:

Scott Mullin was 22 and barely out of Carleton University when the Star headlined a March 5, 1979, piece about him — “Viet refugees view Canadian as a god.’’

A few months later, the CBC called him “The One-Man Board of Immigration,’’ in a July 1979 piece from reporter Peter Mansbridge.

Mullin, now the vice-president of community relations for the TD Bank, determined which of the so-called Vietnamese “boat people” came to Canada and which were denied passage, relying largely on gut impressions which resulted in far more “yays” than “nays.”


As a banker, Mullin is concerned about making good investments. But he knows that, besides investing in things, you have to invest in people. In 1979, he told Mansbridge:

"We have to look upon this for ourselves as an investment in the future,’’ the young Mullin told Mansbridge 36 years ago. “The first six months we might have a lot of problems, but what’s this guy’s son going to be like and how’s he going to do? I think that’s the important thing you have to look at.’’

Just as in 1979, today’s Canada’s immigration officers must be given the latitude needed to their jobs, he says, and they would be looking at the potential of the family unit, not necessarily the parents, but the 14-year-old girl who learned to speak English while in a refugee camp.

“You look at it as a generational investment,’’ he says. “It’s not mom and dad. It’s the kids.’ As he looks back, he knows the first generation of Vietnamese Canadians he admitted did reasonably well.

“The next generation did extremely well.’’


Today we remember our soldiers who have died in four wars. But we should also remember those who have fled wars to live  among us -- and whose coming has enriched this country.

Owen I am a product of the Hungarian disporia of 1957, that settles the immigration question for me.

From the United Empire Loyalists on, Steve, we are a nation of refugees.