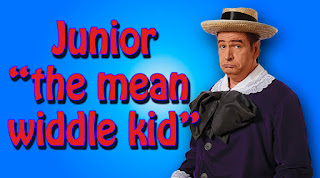 Like Junior, Red Skelton's mean little kid, Stephen Harper's avowed purpose in life has been to throw a wrench into the workings of government. He remained true to form -- even as he was leaving -- making 49 re-appointments and future appointments, whose purpose was to hamstring the incoming government. Alan Freeman writes:

The 49 appointments, including renewals and new appointments, have effectively blocked the newly-elected government from determining the future course of key agencies like the National Energy Board. In one remarkable case of chutzpah, the government renewed in advance the term of Canada Post’s CEO, Deepak Chopra, until 2021 — even though Chopra was the architect of the Crown corporation’s decision to kill door-to-door mail delivery, a policy opposed by both the Liberals and the NDP. (In this case, the Liberals may be able to undo the appointment because it was made “at pleasure”. Others won’t be so easy.)

Several of the future appointments were made just before the government's mandate ended:

What’s particularly curious about the future appointments is that several of them came down just days before Harper called the federal election in early August, at which point the so-called “caretaker convention” came into effect. That convention calls on the outgoing government to show restraint in its exercise of power during an election campaign, and to not do anything controversial. Knowing that the convention was about to come into effect, the government rushed ahead regardless with its future appointments — surely knowing that it could do it with a wink and a nod from its top bureaucrats.


Harper showed no respect whatever for parliamentary conventions. But he couldn't have accomplished what he did without the clear collaboration of senior public servants:

It’s clear that many deputy ministers, each holding their jobs at the pleasure of the PM and reporting to a Privy Council clerk equally beholden to Harper, have spent a decade conveniently ignoring their duty to serve the government and people of Canada. Many have known no other government and may now suddenly find themselves a loss when actually asked for real advice, let alone being forced to speak “truth to power”.


Harper's parting appointments are a reminder of how thoroughly he corrupted the civil service.

Email ThisBlogThis!Share to TwitterShare to FacebookShare to Pinterest
Labels: Corruption Of The Civil Service

The Trudeau Government should undo many of these by whatever means necessary. Here's an idea that Harper would surely do if he was in the same position as Trudeau - Totally eliminate the NEB, so that all the board-members are gone, then reinstate the NEB under a different name.

It may come to that, Kirby. Harper has done everything he can to make Trudeau's tenure as difficult as possible.

I think there is also one other senior party that has not been mentioned: doesn't the Governor General have to sign off on those OIC appointments?

As we are talking about a very highly educated, legally qualified, and apparently intelligent person in the GG, it would appear that he simply could have withheld approving those reappointments that were not slated until after the election. Instead, he apparently approved them all.

Recall that there were already concerns that this GG was rewarded with his post for crippling the public inquiry into the Schreiber-Mulroney affairs by keeping the alleged Airbus kickbacks off the inquiry mandate.

His contempt and disregard for our democratic and parliamentary rules and conventions is showing through even after he has been removed from power, Owen. I suspect there are more unwelcome surprises of a similar nature yet to surface.

I'm quite sure there's more to come, Rural.

True to form, wouldn't you say, Owen? I was just made aware of this underhanded Harper move a few days ago and must agree with Kirby. Kill some of these more important boards as soon as possible, fire all the future 'incumbents' and start from scratch with a re-named and functional board. However, as a former staffing and recruitment person, I would assess the qualifications of all incumbents as well as what skills they actually bring to the table. There may be a few worth keeping although with Harper's ethos, maybe that's just wishful thinking. Again, this pretender of democracy doesn't fail to disappoint and disgust me.

He planned to leave his mark, Lulymay. This provides more evidence that he wanted his changes to be permanent.

It's hard to believe Owen, that we had this secretive, miserable, vengeful and hateful man as our PM for 9yrs.I truly think there is something wrong with him psychologically.There is much more of his corrupt legacy to unearth, but thank goodness he is gone.

.. any self respecting Canadian would step aside, or step down.. or request a new Prime Minister confirm such an appointment. But that presumes the appointee fulfilled their position in an exemplary manner.. no?

As a simple analogy.. say a district Chief firefighter retired.. and responsible for oh 10 to 15 firefighting stations, she or he had honored several indeed, many firehouse Captains during their term.. The new district Chief would certainly need to review her or his core Captains of every station plus any exceptional Deputies or top drawer candidates lest they be lost to other precincts or districts.. There is no insult to be held back by candidates who simple have far superior accomplishment ... .. ever !

This would not be politics.. but sensible appraisal n review of the most qualified (earned on merit) ...

So many of Stephen Harper's appointments & related retroactive extensions seem .. uh .. deplorable.. weak, hardly Canadian in any way.. And by the by.. ! Where is Stephen Harper to defend or validate his actions as THE (former) MOST SENIOR PUBLIC SERVANT in Canada eh? Ol tight lips seems MIA .. silent or secluded.. deluded in Calgary? What? With his dear cabin boy Ray Novak.. Ken Boessenkool, Kory Tenecyke? Stephen Lecce & Jenni Byrne? Oh, Laureen of course.. his secret weapon ..

It would appear we have a classless, curmudgeon ex PM .. unable to deliver a single graceful note to deserving Canadians.. who despite mistrust, gave the guy.. and his misfit Ministers, Spies, Senators, PMO pricks, Robocallers, Incompetents, datawankers & Party Apparatchiks the benefit of the doubt for 10 f'n years .... Sorry .. did I leave out THE BASE ? ? ? And 15.00 $ donors? ?

I'm sure there's more to come out, Pam. And I suspect Canadians will ask themselves, "How did he manage to get away with it for so long?"

This was a man who didn't like or trust people, salamander. Silence was his standard operating procedure. He'll probably remain silent in retirement. And maybe that would really not be a bad thing.

The fact that virtually all current board members of NEB have strong histories with oil companies and oil development and the board has never turned down an oil company proposal, I cannot for the life of me understand why the taxpayer is funding their six figure salaries.

The cost should be considered just another gift subsidy to the oil companies.

Yes indeed, he needs to be left alone to buy Grade 11 level textbooks on economics at Chapters/Indigo stores, so he can brush up on the points he so obviously missed during his college career that caused him to crash and burn. I for one would be unable to listen to any more "Let me be clear .." homilies if some media outlet tried to get him to talk.

I understand he has a hard time distinguishing between visiting authors and Chapters staff, Anon. Perhaps retirement will cause him to revisit his ability to read people.

From the very beginning, ron, Harper has tried to put the oil barons in the driver's seat. Even in retirement, his objective hasn't changed.