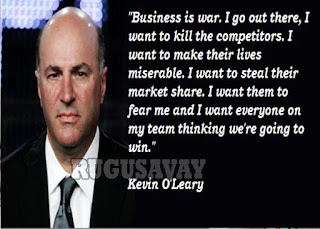 This week, Kevin O'Leary offered to invest a million dollars in Alberta if Rachel Notley would resign. Michael Harris writes:

In offering to give Alberta’s premier a million dollar investment in the oilpatch in return for her resignation, O’Leary declared both what he and his class stand for — and, more importantly, what they think of democracy.

What they stand for is the greedy, reflexive urge to run everything to the financial advantage of the one per cent. As for society at large — and especially for those who wonder why there’s so much month left at the end of their money — a Great White shark has more social conscience than O’Leary and his ilk.


O'Leary blames Notley for a mess Conservative blowhards, like himself, created:

In fact, all of Alberta’s fundamental problems were created over decades of PC leadership by a bunch of self-styled market messiahs who gave away most of the treasure of the tar sands to foreign corporations — while severely under-taxing them. They virtually ignored the people’s stake in their own energy resources, while fouling other, more precious public commodities, like fresh water.

Nor did these oil-junkies, who passed themselves off as solid fiscal managers, ever ask the most basic “what if” questions about their economic stewardship of non-renewables.

What if cheaper alternatives to tar sands oil could be found — like improved solar? What if new oil and gas supplies were to be discovered in the U.S. using new technologies — like fracking? What if the Saudis drove down the world price of oil to preserve their market share from the threat of plentiful but more expensive crude?


There was another alternative:

Knowing how much Kevin likes numbers, here are a few for him to chew on. Both Norway and Alberta have sovereign wealth funds from sales of their non-renewable energy resources. Norway’s fund — the largest in the world — holds over a trillion dollars. In Alberta, the fund was valued at $17.9 billion in 2014. Chump change.

The main difference between the two approaches and their staggeringly different outcomes is that Norway taxed oil companies at a rate that expressed the public ownership of the resource. Oslo also salted away 100 per cent of the government’s share of revenues from North Sea oil.


Mr. O'Leary and his ilk like to think they're the smartest guys in the room. That conclusion is based on the false premise that wealth is a sign of intelligence. Obviously, the two can be mutually exclusive.

It amazes me the degree to which, despite being weakened somewhat, the neo-liberal agenda continues to have any credibility at all. Here we are some forty years into neo-liberalism with greater numbers of people living in poverty, increasingly less stable employment, increasing numbers of people with no real pensionable income, home ownership getting out of reach for our kids, stagnated wages and decreasing benefits for most working people, and a very small appallingly rich group with more and more power overseeing a corporate structure that is killing society. And yet many people still buy the notion that lower taxes is a road to prosperity and that corporate wealth is a way to greater wealth for all. It is like some kind of bizarre cyber-punk novel by William Gibson or Philip K. Dick. And Trump and O'leary, both of whom want to make the situation worse for working people have significant followings among many.

Another right wing loon trying to call himself a Conservative.

When will real Conservatives take their party and name back?

It's interesting, Kirby, that both Trump and O'Leary have been given powerful media platforms which they use to sell their unadulterated swill.

Whenever I see a blowhard like O'Leary, Owen, I think of that immortal line from The Wizard of Oz: "pay no attention to the man behind the curtain. Like the "Great' Oz, O'Leary is all smoke and mirrors; or perhaps a line from Macbeth applies even more aptly: his is a tale told by an idiot, full of sound and fury, signifying nothing.

I've always liked both lines, Lorne. But Shakespeare, as always, managed to put it best.

The greater success of the Norwegians to profit from their resource should go without saying, yet I'm still seeing right-wing trolls trying to pretend it's us "leftards" who don't understand anything.

With regards to your post's image of O'Leary and his self-aggrandizement, I must say that the only things I hear about this guy is that he's a D-list celebrity. His business acumen seems to elude everyone who comments on him.

I understand Premier Notley is welcoming Mr.O'leary's interference. Before the last Alberta election, when a consortium of Toronto business men openly backed the provincial conservatives, voters reacted by electing Notley. While American Republicans may seem inclined at this stage to elect Mr. Trump, a larger-than-life version of Mr. O'Leary, many more thoughtful Republicans are aghast that he could become the party's presidential candidate. I'd bet many Canadians, although somewhat worried about the possibility of Mr. Trump's selection, find it ridiculous. Surely, Mr.O'Leary realizes how Albertans could or would react to his interference in their politics. So what's the reason behind his stated intention? A reassuring place in the public limelight, more TV appearances?

Ego -- unrestrained ego -- tends to lose touch with reality, Anon. I suspect Mr. O'Leary has never been troubled by self doubt.

O'Leary has a following in both Canada and the United States, thwap. But popularity is no sign of genius. Remember when pet rocks were all the rage?

Neoliberalism is alive and well Owen and O'Leary is the face of it,even though if on the low rung on the ladder of wealth. I have been trying to understand lately, how Neoliberalism operates globally. It is incredible that Neoliberalism is what controls and dictates the worlds economy, to the sacrifice of National Sovereignty and its name is never uttered. Not by the MSM, not by politicians, not by most intellectuals. That is what gives it its power.Total control of the worlds wealth by the corporate elite and not a word is uttered about how they are achieving this financial power. Like a silent, secret financial coup.I don't have much faith in Trudeau rejecting or seriously amending the TPP. If he does than I will be greatly impressed,but what will happen if he says no. The countries especially developing countries like Sierra Leone that have said no to their governments embracing Neoliberalism were met with civil war and ongoing brutal violence, all sponsored by the Neoliberal countries like France, Britain and the US.Apparently the threat of civil war in Africa was why Mandela said yes to Neoliberalism. O'Leary is a pathetic blowhard in the face of what our big picture challenge is, Canadian Neoliberalism. What would happen to Canada if Trudeau said NO to the Neoliberal powers that be?

Neo-liberalism survives because it is silently accepted by the governments we elect, Pam. Things will only change when -- and if -- our politicians understand that they serve the many not the few. Perhaps that's too much to ask.

Did O'Leary offer a Canadian politician a bribe? Hmm

I think the Conservatives should make O'Leary their leader. There's enough anti-Canadian dirt on him in his appearances on Dragon's Den to turn any voter's stomach. Any good idea he's right there wanting to develop the product - in China. String a bunch of those together and you've got a devastating campaign ad.

I'm sure O'Leary must have a long list of enemies, Mound. I read today that he thinks you don't have to speak French to become Prime Minister. This from a guy who was born in Montreal.

He leads a comb-free existence, Anon.

It's interesting to note, Steve, that those who champion unbridled capitalism are sinking even as they trumpet their principles.

I'm surprised no one noted the biggest difference between Trump and O'Leary...

Trump for all his bombastic nature, all his faults and failings actually built his fortunes up with a lot of hard work including bad periods where he looked to be on the way out over the last three decades or so.

O'Leary became a billionaire because he sold a tech company right at the perfect peak of the tech bubble right before it popped, getting maximum vale possible and has since acted like that singular piece of good luck/timing made him all-wise and knowing about economics.

Frankly comparing Trump to O'Leary does a serious/major disservice to Donald Trump.

Kirby Evans -- at Kirbycairo -- has an interesting post today about how false populists, like Trump and O'Leary, work hard to destroy institutions then blame those very institutions for the angst that ordinary citizens feel. It's well worth reading, Catherine.

Perhaps, Scotian. But it's worth noting that Trump did not make his wealth. He inherited it.

His "seed corn" yes, you are quite right, but he did build upon it and become something much larger than from where he came from. I'm not saying Trump is a totally self made man, just that he did actually also make real work/effort in creating what he has today including with some serious downturns at various points where it looked like it might be the end for him. O'Leary on the other hand...

That is why I think the comparison is a disservice.

Kirby Evans is in my humble yet honest opinion ALWAYS worth reading. I always do.

There are differences, Scotian. But, certainly, Trump would be a disastrous choice for president.

Oh agreed, disastrous, but that wasn't the point I was making now either was it. I just think that O'Leary is so little there there that Trump clearly has far more substance to him by comparison and that such equating is a genuine disservice to Trump. That is of course relative to each other. Relative to competence for the job of leading a party/nation, of course neither man is by any sane measured rational standard anything but a disastrous choice! That's putting it mildly!

Let's hope that Americans don't choose Trump, Scotian. And let's hope the Conservatives are smart enough to realize that O'Leary is full of hot air.

Owen, the problem is that to be in politics in todays world means having money or the ability to raise money. Thank you for Kirby's blog. It is encouraging to find people who are discussing these issues and not looking for their next piece of bling or toy!

when I read O'Leary's comments I just laughed and laughed. Some of us here in B.C. are still laughing. A Million dollars, that is nothing. You can't even buy a lot for that in Greater Vancouver and he wants some one to resign from their job they just got elected to, over a measley million dollars. Kevin's million won't get him a house in Vancouver and it would keep the oil industry going in Alberta for about half a second. The man must be mad, not to mention unprincipled.

Notely, who was democratically elected, should resign because he thinks some one else can make him more money? where did he crawl out from? Kevin may not understand this, but its not all about him.

When you're self-absorbed, e.a.f, you're the only person that matters.