After The Gold Rush 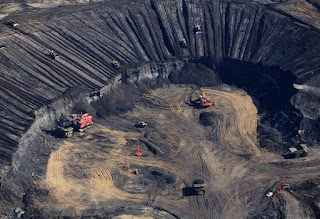 This morning, Alan Freeman asks the question nobody else wants to ask: What if Alberta oil doesn't have a future?

That word — ‘curse’ — is one development economists use to describe the anomalous position of countries awash in natural resource wealth (like oil) where economic growth is nevertheless sluggish and outcomes are actually weaker than in countries that aren’t as “blessed”.

When oil prices are high, there’s so much money to be made in extracting it that other sectors of the economy tend to languish. Agriculture and manufacturing suffer because nobody can compete with the inflated wages in the resource sector. Government revenues are subject to booms and busts, driven by global commodity cycles completely beyond local political control. And oil wealth too often breeds corruption, as those close to power scramble for a share of the resource manna.


This isn't a new phenomenon. Harold Innes coined the phrase "resource trap" decades ago.And our contemporary world is full of examples of it: Venezuela, Kazakhstan, Angola and Nigeria.

In Alberta's case, consider the numbers:

The statistics are striking. In the two decades between 1994 and 2014, Alberta’s GDP grew by an average of 3.5 per cent a year. The province, with something over 11 per cent of Canada’s population, accounted for 25 per cent of net new jobs for the entire country in the ten years to 2014. Two years ago, resource concerns, led by the oilsands producers, invested $126 billion in their facilities, accounting for almost half of all non-residential capital investment in Canada.


Now the situation has changed:

The Saudi oil minister, Ali Al-Naimi, could have been talking directly to Canada’s oil industry this week when he told an energy conference in Houston that he plans to pump as much oil as he can to maintain his market share — even if the price remains mired where it is, around US $30 a barrel.

“Inefficient, uneconomic producers will have to get out. That’s tough to say, but that’s fact,” the Saudi said.


For the last thirty years -- and particularly for the previous ten years -- we have been obsessed with the Economics of Oil:

The problem is that while we were busy convincing ourselves that turning northern Alberta into a giant open-pit mine was the surest way to fortune, we forgot about the benefits of a diversified economy. It became our version of the resource curse. In 2014, natural resources accounted for a whopping 31 per cent of Alberta’s GDP, the same as in Saskatchewan. In Newfoundland, it was 33 per cent. In Ontario, natural resources accounted for only 7 per cent of GDP, while in Quebec the figure was 10 per cent.


But now the Gold Rush is over.

Did someone say Dutch disease hangover?


Canadians have been swimming in an ocean of cognitive dissonance over bitumen, Owen. It has been so oversold that it has undermined the public confidence in Canada's economy. I wonder how much interest the big energy giants will have in the massive Athabasca site/tailing ponds remediation challenge that's staring them in the face should bitumen become a 'stranded asset.' We have the example of the devastation of the Appalachian coal mines in West Virginia and it's pretty gruesome.

Alberta has the advantage of being able to outsource its unemployment/welfare problem as laid off workers return to their home provinces. News accounts claim Newfoundland is already feeling the pinch.

I want the Tar Sands shut down and soon. We know that 80% of global proven fossil fuel reserves have to be left in the ground if our grandkids are to have a somewhat liveable future and that means you begin with the highest cost/highest carbon fuels - coal and bitumen. The energy giants have already taken the easiest, lowest-carbon bitumen out of Athabasca - the low-hanging fruit. Now production has become more energy intensive (more costly and more polluting) and the bitumen being extracted is higher carbon. Just on economics alone, the product is becoming decreasingly less viable.

What I fear is the possible failure of the energy producers just as they're handed the burden of cleaning up Athabasca. If you wipe 80% of their carbon energy reserves from the asset column of their financial statements, insolvency looms large. The current and previous governors of the Bank of England have warned about the seismic shock this could inflict on global markets and pension funds. If these companies go under, who is going to front the tens, perhaps hundreds of millions needed to clean up those tailing ponds (lakes) before they rupture and contaminate the McKenzie watershed, the third largest in the world? I think the feds would have to step in which means you and I will have to cover that tab.

.. don't forget about fracking ,, Its quite possible the overall aspects of this completely different process will far exceed the disaster of the tar sands. There are plenty of examples in the US of how this process unfolds & the local, state & federal benefits.. and of course a lot of complete nonsense, denial, corruption, greed, pollution, disruption as the downside.

Don't think for a minute, that Stephen Harper had high hopes his time in power would be continually fueled & bankrolled by the specific 'profits' of the tar sands & taken to giddy heights by the seemingly endless potential of fracking for oil and natural gas. Note his attention and constant delegates welcomed to the 'Liberal' Christy Clark BC government !

The Harper 'legacy' .. rather than a 'gift' is instead all the toxic legislation he initiated to allow unobstructed trampling of environment, species, protection, health, democracy, First Nations treaties, Science, Biology etc for extraction. The human residue of his twisted 'vision' is the remnant rump of Rona, Tony Clement, Jason Kenney & one supposes the unelected thugs such as Arthur 'last breath' Hamilton, pseudo intellect & disgraced Ken Boessenkool, the in hiding greasy ones like Baird, Moore, MacKay et al.

That Harper himself hides out in some closet netherworld, insulting all Canadians by his cowardice & graceless token & momentary appearances in Parliament - speaks eloquently to the flawed character who misled and wounded his country and Canadians. He was merely the courtesan of Big Energy, his false idols, weak ideology, greed and serving his own narcissism. The sooner we see his back as he departs Canada to 'mull his options' the better..

Harper's 'game' while grooming the electorate & attacking Parliament from within was always to benefit his childish power ride. The self styled 'smartest man in the country' was just fine with leaving our canadian environment in tatters.. as long as he got to have his power trip.. Tar Sands, Secret Trade Deals, Fracking, disastrous Legislation, attacking aboriginal treaties, Election Fraud.. all just part of his growing appetite for corruption.. or some sort of twisted evangelism

It was always deeply personal with Harper, salamander. He had a long list of people and organizations which he wished to destroy.

We already have the precedent of the Banks which were too big to fail, Mound. If the oil giants go bankrupt, guess who'll pick up the tab.

I was thinkingaboot something similar. As the saying goes the stone age did not end because we ran out of stones. I suspect there is something big in the energy world that will make carbon obsolete. Perhaps its already here we just have not realized it yet, or the MSN is not telling us Solar with home batteries can get ur done. Saudi is acting like a junkie who has stolen a thousand dollar bicyle and will sell it for $5.

I suspect that we've moved on to the Next Age, Steve. The problem is that we're really not quite sure what the Next Age is -- yet.