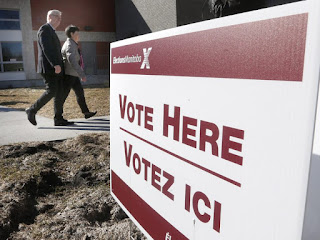 There is a lot of chatter -- particularly from the Conservatives -- about holding a referendum on electoral reform. Gerry Caplan doesn't think a referendum is a good idea. He writes:


To raise issues related to democracy is to raise the question of referendums (or referenda), which are favoured by the Conservatives. They insist only a referendum can legitimize something as fundamental to our democracy as changing our voting system. Presumably the Conservatives also believe a referendum would end up supporting the FPTP status quo, as they themselves do.

But there’s a huge problem here. As any sensible political scientist will attest, the legitimacy of a referendum depends to a substantial extent on the clarity of its language. It must not be too complex or raise issues that most voters will find baffling and thereby diminish the credibility of the result.

Consider the question which was used a few years ago in Ontario:

“Which electoral system should Ontario use to elect members to the provincial legislature?

How many Ontarians were really familiar with what the Citizen's Assembly had proposed? The best solution -- after having a fair hearing on the subject in the revamped  parliamentary committee -- is to  choose one system and give it a trial run. If it doesn't work, it can be abandoned or tweaked. If it does work, we should keep it.

Makes sense to me Owen. Try it, if it doesn't work then change it.

I look forward to change, Owen. Although I know it is not really proportional representation, I am in favour of the ranked ballot - easy to understand, and an opportunity to vote for who you really want without necessarily throwing away your ballot. It seems to me that would be a very good first try at reform and one, I believe, the Liberals favour.

Not to mention that the percentage of eligible voters that would turn out for such a referendum would be so low as to make any result dubious at best and meaningless at worst.

Good point, Dana. Whatever emerges from the committee should be tried out in real conditions. Then, if needed, adjustments can be made.

I wouldn't be surprised if that's the option that emerges, Lorne. It seems like a good first step.

It seems like a practical approach, Pam. It's always a good idea to take a test drive,


As we have learned the referendum option invites one outcome. The "no change" crowd turns out to vote and that's it. Yes, let voters experience the new mode in two election cycles and then pronounce their opinion. I'll bet if they did one option that would be swept off the table in any referendum would be FPTP.

I agree, Mound. A referendum would sink electoral reform.

Canadians don't want a referendum because they know that mainstream media will turn it into an ugly circus of stupidity. The Liberals were elected with election reform as a central piece of their platform. Turning their backs on it would mean turning their backs on their promises.

Exactly, Anon. Whatever emerges from the committee, the Liberals have to follow through on their promise of electoral reform.

A referendum on saying the sky is blue could fail.