Now For The Tough Stuff 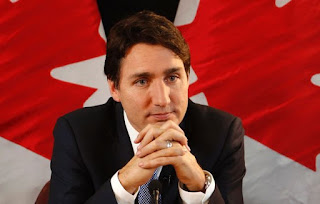 It's interesting that one of the loudest voices from the Right is giving the Trudeau government a thumbs up. Michael den Tandt writes:

There was good, bad and more than a bit of ugly in the first sitting of Canada’s 42nd parliament. On balance, however, Prime Minister Justin Trudeau’s Liberals are hitting the 2016 BBQ circuit with a breeze at their backs — as much because of how they’ve adjusted to mistakes, as their successes.


There were mistakes and miscues. But the government recognized them -- publicly:

The Liberals have shown themselves nimble enough to adjust on the fly. The same goes for their handling of Bill C-14, the law regulating assisted dying, which was a hot potato foisted on them by the Supreme Court of Canada’s 2015 ruling and the Harper government’s refusal to address it.

As I argued last time, the passage of C-14 through the Senate Friday is not only a triumph for the ministers responsible — Health Minister Jane Philpott and Justice Minister Jody Wilson-Raybould — but a positive signal about the viability of Trudeau’s new, independent Senate. It has passed its first major test.

Finally, voters who opted for the Liberals last year will note the party promised them three core, bread-and-butter reforms in the campaign: a new Canada Child Benefit, a tax cut for middle-income earners and national pension reform.


It's too early to call the Trudeau government a success. But it's doing politics differently than the previous government. This week's pension deal underscores that fact.

Now for the tough stuff.

Image: torontosun.com
Posted by Owen Gray at 7:24 am

Email ThisBlogThis!Share to TwitterShare to FacebookShare to Pinterest
Labels: Praise From The Right

It's doing *some* politics differently.

It's also doing *some* politics exactly the same.

And it's doing it's best to hide the rest.

As I said, Dana, it's too soon to reach a definitive judgement.

The Pension win was a no brainer, but in todays world a huge win. Most of what JT is doing is low hanging obvious fruit. But man tough to pick when the MAN wants to hold on to it.

There are a lot of tough decisions still to be made, Steve -- on pipelines, trade deals and defense. We'll have to wait to get a better idea of who Justin is.

No, it's not entirely a success. Its handling of Canadian veterans was deplorable, perhaps worse than the Tory's, because they back-tracked on an important election promise. It's telling that the Vets, always political cannon fodder, have been ignored yet again - now, even by those critiquing Mr. Trudeau's progress.

I agree, Anon. If there's one thing that particularly sticks in my craw, it's Trudeau's treatment of veterans.

I hardly think the Liberals have treated veterans worse than the Harper government. They have committed more than five BILLION dollars which is a lot of money. They have reopened closed centres. They have promised that they will keep working to develop a proper pension system. So anyone who suggests that they are treating veterans worse than the Harper government, doesn't know what they are saying.

I didn't claim that the Liberals treated vets worse than Harper, Anon. But I did suggest that they did not treat them well. Consider the stories recently of vets who have been denied the treatment they need. Every government of this country has a special obligation to its veterans. And the Liberals are still nickel and diming certain issues.

The problem with both Veterans and Natives is pandora box. Both could bankrupt Canada in a blink with the right court ruling. Not wrong not right but a hard thing to govern in the real world.,

If we decide to go to war, Steve, it's going to cost us money -- during the war and after it.