That's When They Turn On You 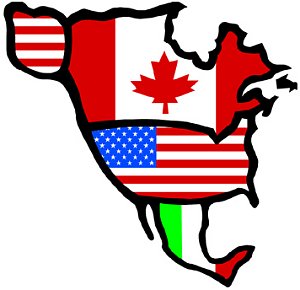 As the leaders of the United States, Mexico and Canada meet today in Ottawa, they're feeling pretty good -- particularly after last week's vote in Britain. Tom Walkom writes:


Their cheery collaboration is being deliberately portrayed as a counterpoint to the British public’s gloomy rejection of the European Union.

In effect, the three NAFTA amigos are saying: Hey don’t worry overmuch about Britain and the EU. Global integration is going gangbusters. Look at us.

If it were only that simple.

It's not that simple. Donald Trump is talking about getting out of NAFTA -- unless he gets his way:

In fact, NAFTA is on uncertain ground. In the U.S., presumptive Republican presidential nominee Donald Trump has taken a hard line against it.

On Tuesday, in an unusually coherent speech, he repeated his promise to either radically renegotiate NAFTA in America’s favour or have the U.S. withdraw from the pact.

And Canadians themselves are not that gung-ho on the deal:

In Canada, a poll this week found support for NAFTA is split, with roughly 25 per cent in favour, 25 per cent opposed and the remainder indifferent or unsure.

No wonder. The addition of Mexico in 1994 to the original Canada-U.S. Free Trade Agreement has helped manufacturers who locate in that country. But it hasn’t necessarily helped Canada.

Cheaper Mexican wages have encouraged auto plants to build there — often at the expense of jobs in Canada. Even Toronto’s troubled new Bombardier streetcars are being built, in part, in Mexico.

Canada’s trade deficit with Mexico stands at about $10 billion.

What the Amigos should remember as they meet, writes Walkom, is that sometimes people get fed up. That's when they turn on you.

Email ThisBlogThis!Share to TwitterShare to FacebookShare to Pinterest
Labels: The Three Amigos

NAFTA and no NEP, two clear disastors for Canada left by lying Brian and his love for the Thactcher Reagan myths.

The myths are coming home to roost, Steve. Dealing with the myths will be a tricky job -- much trickier than David Cameron imagined.

Just over 10-years ago I began noticing ever more articles suggesting that the 21st would be a "century of revolution." Judging by the past decade those voices seem to have been on the money. Globalism now stands exposed as little more than a failed experiment, a belief-based ideology that can function only in a world more resembling Disneyland than reality.

The world that you and I grew up in, Owen, is long gone, never to return. This ugly, socio-economic experiment hatched in the Thatcher/Reagan/Mulroney era has seen to that. That was nothing less than a global order wrecking ball. As for America, with its "bought and paid for" Congress, it has parted company with democracy entirely to morph into oligarchy. That was chronicled very neatly by the Gilens and Page study out of Princeton in 2014. http://www.bbc.com/news/blogs-echochambers-27074746

I was looking at the 2016 "Fragile States Index" at Foreign Policy this morning. The least fragile states are the Scandinavian countries, Britain, Canada, Australia and New Zealand which, with the exception perhaps of Australia, are also best positioned to deal with the coming impacts of climate change. By contrast the least fragile states tend to be in equatorial and tropical regions including the Asia, the Middle East and Africa. With a major climate change shock, named "climate departure," expected to set in over the next decade what will happen to the relative, regional stability on which globalism is entirely dependent? Nothing good. http://foreignpolicy.com/fragile-states-index-2016-brexit-syria-refugee-europe-anti-migrant-boko-haram/?utm_source=Sailthru&utm_medium=email&utm_campaign=New%20Campaign&utm_term=Flashpoints

As far as I can tell, all bets are now off even for the near future. Brexit - whatever that turns out to be (and don't let anyone tell you they know) - certainly has us reeling. What will we do when events of this scale become more commonplace, perhaps even somewhat routine?

What worries me, Mound, is that volcanic shocks tend to produce demagogues -- men and women with simple answers to complex problems. That's when we go from the frying pan into the fire.

Trudeau's constant yammering about doing more "trade" deals is perpetuating the myth that these deals are about "trade." You're right that "the myths are coming home to roost." Canadians are starting to understand that Canadians haven't benefited from NAFTA. In fact it is costing us. Our government hasn't figured that out or they don't care. Walkom is right, that Canadians may get fed up. Trudeau has already shown that Canadian interest means nothing to him. The arrogance that he showed when he explained why he had green lighted the Saudi deal indicated to me that without a doubt he was going to continue with Harper's neoliberal agenda, including doing it for the most part behind closed doors and resenting any questions being asked of him. It's early days, but I am already fed up.

Sadly, Owen, the only way I can see any of this turning around is if the status quo politicians perceive a threat to their positions, as a somewhat flexible capitalism did when it was competing with another ideology, communism. When the Wall fell, unfettered capitalism, triumphant, unleashed its agenda. Until people are sufficiently educated about these trade deals and flex some muscle, our political 'leaders' will be justly complacent and carry on as usual.

They're already here, Owen. Trump of America, Farage of Britain, le Pen of France, Poland's Kaczynski, Orban of Hungary, Erdogan of Turkey, Netanyahu of Israel,the gaggle of princes, sheikhs and emirs of the Middle East, military strongmen in Egypt, Burma, Thailand, on and on. There is positive nationalism and negative nationalism; positive populism and negative populism. One seeks to empower and bring out the best, the other seeks to ensnare and bring out the worst. It takes leaders to empower and bring out the best but third-rate rulers do just fine practicing the worst. One requires vision and leadership. The other distracts, deceives and manipulates through the time honoured tactics of sowing xenophobia and intolerance, the stuff that appeals to our basest instincts.

It takes a certain amount of hubris to become a politician, Lorne. Unfortunately, that hubris can blind politicians from seeing the future. Just ask David Cameron about his inability to see what was coming.

Dissatisfaction can quickly go viral, Pam. Once it catches on, a politician has no future.

I agree, Mound. We've raised quite a crop of demagogues. The Lincolns -- who appeal to the better angels of our nature -- are much harder to find.

We should round up the lying economists and all the other propagandists and assorted cheerleaders of market libertarianism before too many more of them start selling new and revised scripts to the demagogues.

I can assure you they already have, John. It's worth remembering that the first leader Milton Friedman sold his program to was Augusto Pinochet of Chile.

The trouble is that they are believers. They don't know they are lying. They don't wake up when the data doesn't conform. Worse, our mainstream media is owned or controlled by believers and still gives credibility to the Fraser Institute and similar fake think tanks. Our universities still teach the lies. The whole mess is self perpetuating.

Eventually a critical mass of dis-believers will rise up and restore the Guillotine. Why can't humans learn before it gets to that?

Unfortunately, Toby, most of us -- myself included -- are slow learners.

Who Owen is ultimately responsible for exposing the political truth? Is it the MSM, the intellectuals, the opposition, indivdual government bureaucrats and politicions? All of them are responsible to reveal the political truth to Canadians, but none of them take that responsibility seriously. Usually when a whistle blower comes forward, that is one of the few times we get some truth about what our government is really doing.The fact that Neoliberalism domestic and global is practiced by our government even as it threatens our very sovereignty and is never ever discussed or its name even stated reveals the corrupt relationships our governments have with the global corporate elites. We live in a world where our country whose liberal democracy is being undermined, and dismantled because our very own government supports not Canadian interests, but various special interest groups.

What does it matter if we lose our freedom to a democracy hating tyrant like Harper or an oblivious, unaware, conformist like Trudeau? Canadians will have to discover the real political truth by themselves. As Toby said,why can't humans learn before we exercise a violent revolution to make the needed changes. I think I'm a slow learner to Owen. It took me awhile to realize that I was not hearing the truth from our supposed to be political watch dogs and that I would have to learn for myself.

When people have been lied to Pam, they can react violently. Or they can steadfastly seek the truth, believing that -- ultimately -- the truth will set them free. So much depends on making the right choice.