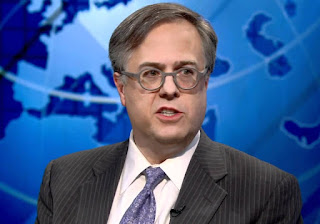 Michael Gerson used to write speeches for George W. Bush. For sixteen years, he has carried the Republican flag for George W. Bush and against Barack Obama. But he writes in the Washington Post that Americans of both parties should not vote for Donald Trump, a man who represents everything that is antithetical to American ideals:

His political theory, such as it is, is “us” vs. “them.” The “them” may be Republican elites, or liberal elites, or migrants or Mexicans or Muslims. Trump would be elected on the promise of fighting, rounding up, jailing or humbling any number of personal and political opponents. Take away this appeal, and there is nothing left but grasping, pathetic vanity.


What is most appalling about Trump is his monumental ignorance of how government works:

The single most frightening, anti-democratic phrase of modern presidential history came in Trump’s convention speech: “I alone can fix it.” A Trump victory would be a mandate for authoritarian politics. Trump’s ambitions would be bounded by strong legislative and legal institutions and by his own risible ignorance of real leadership. But a Trump administration would be a concession to the idea that America needs a little more China, a little more Russia, a little more “so let it be written, so let it be done” in its executive branch.


Now Republicans appear to be coming home to Trump. And, in the process, they are normalizing him:

It is almost beyond belief that Americans should bless and normalize Trump’s appeal. Normalize vindictiveness and prejudice. Normalize bragging about sexual assault and the objectification of women. Normalize conspiracy theories and the abandonment of reason. Normalize contempt for the vulnerable, including disabled people and refugees fleeing oppression. Normalize a political tone that dehumanizes opponents and excuses violence. Normalize an appeal to white identity in a nation where racial discord and conflict are always close to the surface. Normalize every shouted epithet, every cruel ethnic and religious stereotype, every act of bullying in the cause of American “greatness.”


Gerson refuses to come home. Integrity is not a Republican virtue. He is of a rare breed indeed.

Image: WBDaily
Posted by Owen Gray at 8:45 am

This is hardly evidence of Gerson's integrity. The man was quite willing to excuse all of those faults when it came to George W. Bush. He was willing to normalize Dubya's vindictiveness and prejudice as he ordered the capture and torture without trial of innocent Afghan and Iraqi peasants. He had no problem with Dubya's branding Deke fraternity pledges with a hot coat hanger, which he dismissed as "cigarette burns." Gerson had no issue with Dubya smirking and giggling as he announced he was sending US soldiers to die in Iraq. He had no problem writing speeches for Dubya that dehumanized opponents as traitors and cowards and excused the unbelievable violence Bush unleashed on the innocent people of Iraq and Afghanistan.

In short, Gerson's no moral paragon. He's a Bush family operative still smarting from the smackdown Trump gave Jeb! Gerson's as much responsible for setting the tone in the GOP that led to the rise of Trump as anyone else in that wretched party.

It reminds me of David Gergen who served Nixon, Ford, Reagan and Clinton. A once devout Republican, he defected to the Democrats when he could no longer ignore that his GOP had turned so mean spirited, so neoconservative that even Reagan would be spurned as a leftist.

I give Gerson no credit for supporting Bush, Anon. But I do give him credit for seeing through Trump. And, by the way, he has seen through Trump since the primaries.
What is disheartening is that several Republicans who agreed with Gerson have changed their opinion as they have perceived that victory is within their grasp.

There are a few former Republicans who have found the trajectory of the Republican Party too much to stomach, Mound. They may not vote for Clinton. But some of them have reached the same conclusion as William Kristol -- that Trump is "a roaring jackass."

But when it comes to running open, transparent, accountable government of the people and a prosperous, sustainable economy THEY SUCK.

They are hysterical over Trump because he promises to: 1) unwind free-trade globalization; 2) unwind neocon interventionist war-profiteering; 3) prosecute corrupt bribe-taking politicians like the Clintons. THEY SHOULD BE HYSTERICAL. THE PARTY IS COMING TO AN END.

Let's hope Americans are not fooled by establishment media lies and manipulations and they vote to DRAIN THE SWAMP next Tuesday. Shove Donald J Trump right up the establishment!

Then a Green New Deal in 2020 which will allow Millennials to turn our disgusting concentration-camp civilization into a CIVILIZED civilization humanity can be proud of.

It is a testament to the bone headed Republicans that they did not know that Trump is "a roaring jackass" years ago, that they let him get this far in the process.

An excellent piece, Dana. Rich's analyses have always been superb. And he's right:

Yet if Trump is no Hitler, he’s proved himself a stalking horse for a movement with Hitlerian ambitions, psychoses, and allies, the foremost of whom is a strongman with credible Hitler potential, Vladimir Putin. Trump has made himself the supreme leader of an enraged swath of Americans, perhaps some 40 percent of the electorate, as eager to blow up our republic as the Nazis were Weimar.

Perhaps that's because they were blinded by their own anger, Toby.

So Gerson is annoyed at Trump because he talked about "us vs them" but he had no problem when wanting to invade Iraq, Bush crowed that "if you're not with us then you're agin us". After putting up with that cold-eyed myth who called himself an economist for 10 years, I don't think we have advanced that much either. We are just bloody lucky that Harper wasn't the PM when Bush was chomping at the bit to invade Iraq because Harper would have been in lock step with him. Can you imagine how many Canadians would have lost their lives being the cannon fodder that was sent in ahead of the Yanks?

Have to agree with some commenters though. Indeed, the two preeminent political parties who have basically had control of both the US and Canada, are closer to being 2 sides of the same coin. Its just that some have a much nicer personality and presentation that others.

Agreed. Lulymay. It's not an inspiring choice. But it is what it is.

I would say you old neoliberal Baby Boomers have been suckered by Hillary. But you would actually have to believe in SOMETHING before one could say you have been fooled into believing the wrong thing.

One day your blog is criticizing neoliberal and neocons policies. The next it is praising Hillary for uniting the neocons behind her grand neoliberal vision of government by global oligarchs via bribery.

I'm not going to waste my time reading some neoliberal manipulation piece that compares Trump to Hitler. I know enough about history to know it's utter nonsense.

But I will address the ridiculous story that says the email server scandal is BS.

1) The only reason Hillary had a poorly-constructed, improperly-secured email server set up in her basement as SoS was to have the ability to destroy evidence that would be subpoenaed on any other server.

3) Hillary smashed her old smartphones connected to the server with a hammer to destroy evidence.

4) Hillary had classified documents on her private insecure server. There is no reason they would be on there unless she was selling access to classified information along with access to government.

5) There is a lot of evidence that connects the dots between Clinton Foundation donors and favors done by Hillary's State Department, including clearing up a Saudi arms export logjam after a $25-million donation.

People who look the other way on this flagrant corruption that has negated our democratic institutions and put civilization on the verge of collapse are just as bad as the corrupt politicians liquidating the public trust. You are complicit in their crimes against humanity. You are on the wrong side of history.

There are two simple solutions to this standoff, Anon. You can stop reading what you clearly disagree with. Or I can stop publishing your comments. Guess what solution I've chosen.

Your forbearance has been admirable, Owen. But you're not a teacher any longer - you don't have to tolerate what you don't want to any longer.