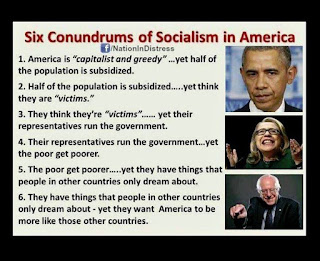 It's tempting, after Donald Trump's election, to think magically. If you're an evangelical, why worry about climate change if you're convinced that The Rapture is just around the corner? And, if you're a desperate coal miner or steel worker, why not think magically when Trump promises that he'll bring your jobs back? But bringing those jobs back won't be as easy as settling a $25 million suit against Trump University.

And Trump's opponents are making a mistake if they, too, begin to think magically. Chris Hedges writes that Trump's opposition must focus on economic justice:

We cannot battle the racism, bigotry and hate crimes that will be stoked by the Donald Trump presidency without first battling for economic justice. This is not a gap between the tolerant and the intolerant. It is a gap between most of the American population and our oligarchic and corporate elites, which Trump epitomizes. It is a gap that is understood only in the light of the demand for economic justice. And when we start to speak in the language of justice first, and the language of inclusiveness second, we will begin to blunt the protofascism being embraced by many Trump supporters.


You will not find the fight for economic justice on the Christian Right:

Those enthralled by such thinking are Christian heretics—Jesus did not come to make us rich and powerful and bless America’s empire—and potential fascists. They have fused the iconography and symbols of the American state with the iconography and symbols of the Christian religion. They believe they can create a “Christian” America. The American flag is given the same sacred value as the Christian cross. The Pledge of Allegiance has the religious power of the Lord’s Prayer. That a sleazy developer and con artist was chosen as their vehicle—81 percent of evangelicals voted for Trump—for achieving this goal is startling, to say the least. But this is not a reality-based movement. Most of those who profit from this culture of despair, many wrapped in the halo of the ministry, are, like Trump, slick, amoral trolls.


But, more importantly, those who Hedges has labelled "the liberal class" must realize that their place is on the side of the economically dispossessed:

The liberal class has no hope of defeating the rise of American fascism until it unites with the dispossessed white working class. It has no hope of being an effective force in politics until it articulates a viable socialism. Corporate capitalism cannot be regulated, reformed or corrected. A socialist movement dedicated to demolishing the cruelty of the corporate state will do more to curb the racism of the white underclass than lessons by liberals in moral purity. Preaching multiculturalism and gender and identity politics will not save us from the rising sadism in American society. It will only fuel the anti-politics that has replaced politics.


Convincing Americans to buy socialism is going to be a tall order.

Image: Always On Watch
Posted by Owen Gray at 9:12 am

The first step has to be finding another name; Americans will never buy into Socialism. Call it Congressman's Benefits For All (CBFA) and they will want it. Give it a euphemism they can swallow and they are in. To a large extent, that's what Roosevelt did when he called it a New Deal.

America is sold on the myth of Haratio Alger. It is the black kid from the ghetto making a billon dollars in the NBA and for white folks the stock market, or inventing sham wow. You cant change this attitude without total humiluation, aka the great depression. FDR was a relief valve that preserved everything to come around again. I believe as Marx said Capitalism will destroy itself and thats a pity.
Because capitalism is needed to make socialism work and that is an understanding of human nature and relief. We would all work hard if rewarded, but how many jobs fufil that task?

It's like a starving man living in a a beautiful house with a kitchen full of canned food.

But he won't use the can opener in the drawer because he's been told it's evil.

This doesn't just apply to the USA either.

To get people to look at an idea, Anon, you need the right label.

Owen the fact is you can not support a capitalist economy where robots do all the work. Its an oxymoron.
Supply and demand and if your not working you have no supply and lots of demand. Winston Chirchill that wonderful leader gassed the Kurds for the same ideas, what becomes us.

I agree you need to employ people to buy goods and services, Steve. What's changed is what those employed people do. The autoworker has been replaced by the robot. People are now employed creating goods and services. And they need more than a high school education to do that.


I'm a bit leery of Hedges' call to socialism. Like most bands on the political spectrum there is a great range of ideologies that could be described as socialist. The range extends from Communism on one end to European model social democracy at the other. The European brand is compatible with regulated capitalism while the other end is not. Even China, while still essentially totalitarian, now embraces capitalism. In fact the forces of capitalism seem to find compliant totalitarian rule less messy and more suited to their needs than chaotic and sometimes unreliable democracy.

The irony to Hedges plea is that Americans already have the model they need to rehabilitate - progressivism. Progressive democracy is what created the world's most broad-based and robust middle class in history, that of postwar America. It took the first half of the 20th century to get there but get there it did and it can happen again once the shackles of neoliberalism are broken.

That's what so mystifying about all this, Mound. The Americans don't have to re-invent the wheel. But they're stymied by magical thinking -- or not being able to think at all.

Re
If you're an evangelical, why worry about climate change if you're convinced that The Rapture is just around the corner?
Just a cop out, a reason to be selfish.


Convincing Americans to buy socialism is going to be a tall order.

They swallow corporate welfare by the bucket so why not tweak it a little for the trailer park crowd?

As John Kenneth Galbraith wrote some time ago, TB, the modern conservative has been trying to find a moral justification for selfishness. In fact, there are people of all political stripes who are engaged in the same quest.