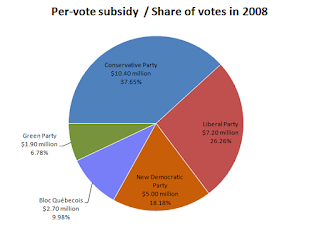 There has been an outcry lately about political party fundraising. I, for one, am getting tired of all the parties sending me emails asking for a donation. Susan Delacourt writes:

We know that all political parties need money — millions of dollars a year, in fact. But what exactly are they selling to get it?

So far, the Liberals’ answers on these questions have been less than adequate. We’ve heard the business-as-usual rationale: “All parties engage in fundraising,” Government House leader Bardish Chagger said in the Commons this week. “We all have to follow the same rules. Those rules were put in place by the previous government.”

In the Commons today, Trudeau himself put forward a similar argument, suggesting that Canadians could trust his party not to sell out to donors. That’s not unlike what the prime minister said when he seemed to be musing aloud in interviews last week about abandoning electoral reform — that the system isn’t so bad, really … as long as Liberals are in charge.


And, like their federal cousins, the Ontario Liberals have also been in fundraising hot water. Martin Regg Cohn writes:

Everyone grumbles about grubby politicians getting addicted to cash. But talk is cheap and cheap shots are easy.

Rather than merely badmouthing money politics, we should put our money where our mouths are — by allocating more public funds to elections. True reform means reducing dependency on the seamier underside of fundraising, by adding an above-board allowance from the public purse.

Many will reflexively criticize any use of public money to (partially) underwrite campaign costs. But they might not realize that elections are already heavily subsidized.

As it is, Elections Ontario spends roughly $100 million on organizing the campaign and counting the ballots. If we spend that much on tallying votes, is it asking too much to allocate a further $12 million, plus or minus, to defray costs for the men and women running for elected office?

Jean Chretien's subsidy for each vote cast in the last election was a good idea. Delacourt writes:

I’d be happy, in fact, if the government brought back the public subsidy for political parties, which was based on how many votes they received in the past election. It was a form of proportional representation, levelling the fundraising field somewhat for smaller parties, and it recognized that parties do public work. Without the subsidies, parties have been forced to become 24-7 fundraising machines, selling ‘sticker packs’ or whatever else the public may be keen to buy, just to keep the lights on in their offices.

Moreover, under the subsidy system, every voter is equal, regardless of income. Whether you earn six figures a year or minimum wage, your vote counts for the same dollar or two in the party treasuries.


The first thing Stephen Harper did when he came to office was to get rid of the subsidy -- a move which almost brought his three month old government down. Harper had a lot of lousy ideas.

It's time to return to a good one.

Email ThisBlogThis!Share to TwitterShare to FacebookShare to Pinterest
Labels: Public Financing Of Elections

I will always remember when confronted with the idea of not wasting a vote we could always give a dollar to the Greens when making a vote of conscience.

I agree, then keep a tight cap on election spending. Elections should not be about who can spend the most money spinning the public perception in their direction.

If your party is funded by your vote, zoombats, your vote isn't wasted.

What they are supposed to be selling in return for donations is a government similar in philosophy and policies to that of the donors.

With subsides, a vote generates a donation, rww -- and the donation is the same for each person.

They could fund this be ending the subsidies for carbon industries.

Exactly, Toby. And the change would be in line with the Paris agreement -- which comes into effect today.