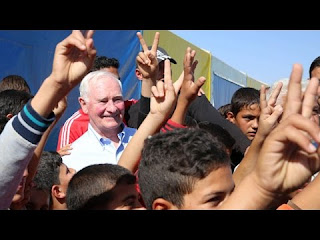 A week ago, Justin Trudeau sent the Governor-General to the Middle East. The message he carried with him was much different than the one Stephen Harper promulgated for almost ten years. Michael Harris writes:

A renowned academic known to his grandchildren as ‘Grandpa Book,’ Johnston told the Canadian Press, “The way forward in this very specific region is a two-state solution and a just, longstanding and comprehensive peace.” And if that can be achieved then there is hope that some of the larger problems in the region can be dealt with.

Johnston said the political situation in the Middle East was “complicated.”  Both Israeli and Palestinian leaders told the Governor-General they wanted peace. Despite the rebuke of the Palestinians in the Harper era, where John Baird often looked like the Foreign Minister for Israel, Johnston said that Canada remains firm in its view that a two-state solution was the way to peace. He told CP, “anything we can do to encourage the representatives of those two peoples to get together face-to face to negotiate the challenges, that is very much what we want to do.”


Johnston's visit is a Canadian first:

Johnston is the first Canadian Governor-General to make a state visit to Jordan, Israel and the West Bank. The GG was received by the King of Jordan, and visited Zaatari refugee camp where 80,000 desperate refugees from Syria wait for better days. Johnston met some of the Syrian families who will soon be coming to Canada, and played soccer with their children. Jordan is a country overwhelmed by 650,000 Syrian refugees, and 55,000 Iraqis.

All told, Johnston spent three days in Israel, where he was warmly welcome by Netanyahu. Canada signed an industrial partnership agreement with Israel, and Johnston said he had a good discussion with Netanyahu on key areas of Israeli- Canada engagement. Johnston is the first Canadian to plant an olive tree in the Grove of Nations” as a symbol of peace.


Like so many of Trudeau's initiatives, it's hard to predict the long term consequences of Johnston's visit. But one thing is certain: When Canada talks about the Middle East, it no longer bellows.

Email ThisBlogThis!Share to TwitterShare to FacebookShare to Pinterest
Labels: Johnston Of Arabia

Hockey helmet Dave is an organ grinder's monkey. He is a man of no significance.

That's a little harsh, Anon. He will be remembered for more than Erich Segal's reference to him in Love Story.

It's a return to the traditional way we do diplomacy, Steve.

"He will be remembered for more than Erich Segal's reference to him in Love Story."

I doubt that Dave will be remembered at all.


We've been flapping our gums for a "two state" solution since the great Israeli land grab following the 1967 war. 1967, the year of Canada's centennial. Here we are, preparations already underway to celebrate our 150th anniversary as a nation, and we're still chirping "two state" solution as though our persistence is meaningful.

I don't think we should kid ourselves, Mound. The world does not wait from our pronouncements from on high. On the other hand, there will be no peace without a two state solution.


You're right, Owen. However achieving results begins with figuring out just who's holding the whip hand and then bringing pressure to bear where it can have some effect. That just happens to be the essence of BDS.