Sometimes The Difference Is Insanity 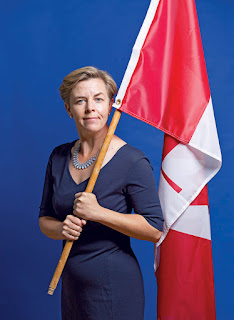 The United States has Donald Trump and we have Dr. Kellie Leitch. Leitch likes to burnish her medical credentials. But that doesn't impress Alan Freeman:

Apparently, we were all supposed to be very impressed by somebody being a pediatric orthopedic surgeon. Medical titles do have a certain cachet in politics, the way “brain surgeon” used to be synonymous with brilliance and accomplishment. That, of course, was before Dr. Ben Carson became a candidate for the Republican Party’s presidential nomination and convinced us that being a brain surgeon was no barrier to being remarkably dim. (Remember him saying the Holocaust never would have been as deadly if Europe’s Jews had all gotten guns? Or his crackpot theory that the pyramids weren’t the tombs of pharaohs but granaries built by the biblical Joseph?)

Anyway, until fairly recently Leitch seemed incapable of giving a speech or an interview where she didn’t talk about how she was really Dr. Albert Schweitzer first and a politician second. “It’s part of who I am, being a surgeon and taking care of children,” she once said.


Now Leitch is talking about how Donald Trump's victory has energized her campaign to become leader of the Conservative Party:

Now, as a leadership candidate for the Conservative Party of Canada, Leitch has decided to take another stab at stirring up the cauldron of fear with her “Canadian values” test. She literally wrapped herself in the flag for a recent Maclean’s magazine cover and now is embracing Donald Trump.

So a medical doctor, the daughter of a longtime Conservative organizer, a graduate of Queen’s, University of Toronto and Dalhousie and a member of the party since she was a child is — suddenly, somehow — a woman of the people, a populist of the first order.


Sound familiar? God help us if Kellie Leitch becomes prime minister. There is a huge difference between knowledge and wisdom. Sometimes the difference is insanity.

On an entirely different note: Leonard Cohen died yesterday. We shall not see his like again.

Image: Macleans
Posted by Owen Gray at 8:30 am

I have a feeling that more such right-wing misfits will be crawling out of the woodwork, now that Trump has won the presidency, Owen. I fully expect, for example, the unilingual Kevin O'Leary to be one of them. And then there is the remarkable Brad Trost: http://politicsanditsdiscontents.blogspot.ca/2016/11/more-from-conservative-braintrust.html

I believe it was John Kenneth Galbraith who told a story about meeting a geo-physicist on an airplane flight over the Rockies, Lorne. They discussed the problem of drought in the American West. The solution, the physicist said, was to detonate a small nuclear device over the Great Divide. That would free up the necessary water supply.

I got this one this morning from a buddy in the trades who works on industrial construction projects:


"Well Brother it has been quite a week.

"It didn’t take long for the closeted racists to unveil themselves at work. All of a sudden it’s okay to call a black man a n*_* and a woman a dumb c*_* in the open and to their faces. I was dumb struck at this behaviour from so-called educated trades people. Of course I know they're nothing like educated but I thought they at least had manners. Apparently not.

"The astounding thing is that it wasn’t relegated to just one or two people. It was pervasive. When I opened my mouth to express my dissatisfaction I was told, 'Shut it fag. The times are changing.'

"Welcome to the next 4 years."

Maybe this is the real Trump revolution. Civility has become "political correctness".

Perhaps I'm naive, John. But my hunch is that Trump will eventually fall victim to the forces he has unleashed. I don't know how long it will take. And I hope the end won't be too bloody. But I'm sure it's going to be a rough ride.

I think you are right, Owen. We may have just witnessed the wackiest sales pitch ever. Many of Trumps supporters don't realize it was just a sales pitch and not to be taken seriously. They will be out for blood.

When his supporters realize that they've been given a diploma from Trump University, Toby, they will take to the streets.

.. actually, I believe America has elected Mike Spence .. Trump is a front ..

Sounds like the plot of the movie, "My Fellow Americans," salamander, where the vice president reveals that it's all been "a big facade" -- pronounced F-A-K-A-D-E.

.. the strange story of Dr Kellie Leitch is a weird metaphor of her principal mentor Stephen Harper's political voyage.. Her evolving 'values' or rsther the descent of her values and ethics (if she ever had any) are whisking themselves away just as herr Harper's did (as if he ever really had a shred of values) Harper of course is and was always cut from the same cloth as Donald Trump.. the astonishing & rampant narcissism pervades both.. Kellie Leitch is now manifesting the signs, loud and clear.. and her onholy alliance with backroom operator Nick Kouvalis is a clear sign that its win baby win..

Dr Leitch of course is the elite.. A millionaire - a strange scion of the Fort McMurray tar sands, oddly embraced by that late saint Jim Flaherty, a 'star' candidate dropped into the riding of Helen Guergis as she was shot down in flames, and should be infamous for forgetting to mention her financial involvements in a corporation that was essentially the 'landlord' responsible for renting space to Federal and provincial governments. Small government needs a lot of space dontch know.. a lot & with bigtime long term leases..

Stangely, the story goes she gave saint Flaherty the kiss of life as he died in his condo.. and her bizarre romantic relationship with the toad Peter Van Loan was surely sexuality camouflage for both.. kind of like the laughable myths of Pierre Poutine Poilivre romancing a stone cold witch.. and the wondrous convoluted relationships of Ray Novak, John Baird, Nigel, Laureen & a morose surly smartest guy in the room named Harper.. Well, #ridemewilfred but it seems politics is now packaging, positioning and pretending.. and maybe someday, somewhere.. down the rabbit hole is a shred of public servant.. you know, that thing they were elected to do by their riding electorate.. I believe its called 'representation' .. in Parliament.

But these are the strange daze.. the facade (!!) .. such that a complete fake like Christy Clark can just cancel the fall sitting of British Columbia's legislature on her whim.. kind of an inverse mormon prorogue.. and skip the formality of a subsequent election or consequence.. its more import that Site C get driven to 'the point of no return' .. or was it 'no turning back' ? A kind of economic buffalo leap into the anals of history.. Oh, was that a spelling mistake

Thus Kellie Leitch can see her way clear.. just make it all up as she goes, get excited like Rona about what the new Retrumplikan party can do for them.. and get on with trashing the Environment, Democracy, Decency, Responsibility.. onward ho.. to the Rapture !

Leitch is unabashedly taking her inspiration from kindred spirits to the South, salamander. It's an ill wind that blows from there.