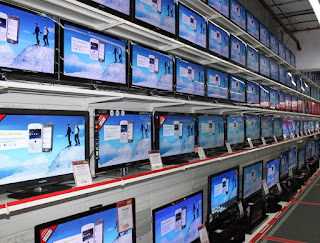 Television made Donald Trump. Television elected him. In retrospect, Neil Postman's critique of the medium makes Trump's rise seem almost inevitable. In Amusing Ourselves To Death, Postman argued that the real danger television posed was that it would eventually replace print as our prime medium of communication.  George Orwell didn't accurately predict our future. But Aldous Huxley did:

We [have] forgotten that alongside Orwell's dark vision, there was another - slightly older, slightly less well known, equally chilling: Aldous Huxley's Brave New World. Contrary to common belief even among the educated, Huxley and Orwell did not prophesy the same thing. Orwell warns that we will be overcome by an externally imposed oppression. But in Huxley's vision, no Big Brother is required to deprive people of their autonomy, maturity and history. As he saw it, people will come to love their oppression, to adore the technologies that undo their capacities to think.


And, now, we have a supreme narcissist as president-elect -- a man who admits that he doesn't read, but he does pay attention to "the shows."


In the process of getting what we desire, the whole nature of opinion has changed:

“In America, everyone is entitled to an opinion, and it is certainly useful to have a few when a pollster shows up. But these are opinions of a quite different order from eighteenth- or nineteenth-century opinions. It is probably more accurate to call them emotions rather than opinions, which would account for the fact that they change from week to week, as the pollsters tell us. What is happening here is that television is altering the meaning of 'being informed' by creating a species of information that might properly be called disinformation. I am using this world almost in the precise sense in which it is used by spies in the CIA or KGB. Disinformation does not mean false information. It means misleading information--misplace, irrelevant, fragmented or superficial information--information that creates the illusion of knowing something but which in fact leads one away from knowing. In saying this, I do not mean to imply that television news deliberately aims to deprive Americans of a coherent, contextual understanding of their world. I mean to say that when news is packaged as entertainment, that is the inevitable result. And in saying that the television news show entertains but does not inform, I am saying something far more serious than that we are being deprived of authentic information. I am saying we are losing our sense of what it means to be well informed. Ignorance is always correctable. But what shall we do if we take ignorance to be knowledge?”


And that is what has happened in the United States. Ignorance has been taken as knowledge. A profoundly stupid man has been elected by a significant number of profoundly stupid voters. When that happens, you get Stupidity Squared.

Excellent, excellent post. Its been a long time since I read Postman's work. Brilliant insights. I should read him again.

He was a canary in our coal mine, Kirby.

Thanks for this very timely reminder, Owen, of what we are becoming. I also think of Fahrenheit 451; although it is set in a society that burns books, the two images I most remember from novel are the 'seashells' that are in everyone's ears, surely the prediction of the ubiquitous earbuds today that allow everyone to inhabit their own isolated worlds, and the ever-present giant telescreens that run 'reality' shows.

But as your post suggests, there is no longer a need for book-burning. Far too many have traded those for the anodyne comforts offered by mindless, empty technology.

The empty head has become the contented head, Lorne.

I have not read Huxley, Owen, but it seems, like Orwell, he had an inside view of the future its just that we are just now moving out of the Orwell era into the Huxley era. That the TV "news" is, on even the more restrained stations, now increasingly filled with 'opinion' pieces continues to annoy me .... as does the preempting of regular news on one particular station until the golf coverage has concluded. Really! Somehow it seems our TV news networks have their priorities all wrong.

Yes! There is someone out there who actually thinks about this stuff! Great post, Owen.

In the land of the stupid, the smart have to play dumb. I don't believe for a moment that Donald Trump is actually stupid or that he doesn't read. In fact, his ex-wife Ivana reported that he kept a book of Hitler's speeches as bedside reading. His sister, Maryanne Trump Barry, sits as a judge on the Third Circuit Court of Appeals. His uncle, John G. Trump, was an MIT engineering prof. Donald himself is a Wharton grad with a degree in economics who has for years run large corporations. The chance of him actually being stupid is zero, as is the chance of him actually believing that global warming is a Chinese conspiracy.

Trump says this kind of stuff because the voters he's appealing to ARE stupid. Like George W. Bush, a Yale and Harvard grad, Trump deliberately tries to come across as uneducated in order to appeal to the vast sea of seriously uneducated Americans who support him. Those Americans are what Orwell called "proles," really stupid people who wear their stupidity as a badge of honour. There is no reasoning with them as they cannot follow logical argument. To reach them you must swim in the ocean of toxic conspiracy theories they have been taught to believe by their pastors, right-wing hate radio, Fox News and people like Alex Jones.

The genius of the right has been to use religion, white supremacist rhetoric and infotainment to make the proles incapable of understanding where their interests lie let alone organizing to achieve them. At least in Orwell's day proles were able to organize into unions and other forms of collective action. Today's proles react with horror to even the thought of those things.

There was a time when William Paley -- who owned CBS -- said that his news division was non-profit, Rural. He said he had people like Jack Benny to help him make money. Those days are gone. News has to make a profit. That means it has to entertain. That lesson hasn't been lost on Donald Trump.

Postman thought about this stuff a lot, Toby.

I think there's something to what you say, Anon. As an entertainer, Trump is playing the rube. However, a really wise person -- who knew something about the history of the United States and its people -- would not speak in the kind of virulent language Trump has chosen.

Steve Bannon -- Trump's new strategist -- has an MBA from the Harvard Business School. In fact, true stupidity has nothing to do with formal education. But it has everything to do with wisdom -- or, more precisely, the lack or it.

Thanks for this post, Owen. I've got Huxley and Orwell kicking around here somewhere and I had thought about reading both again. I think I'll get my hands on Postman instead.

I first encountered Postman as a student, Mound, in a book called Teaching As a Subversive Activity, which Postman wrote with Charles Weingartner. They recommended that teachers help their students develop a good set of what they called "crap detectors." It's still excellent advice.

Huxley still rules!!!
Right on the money no less!!!!
(And here I am on the INTERNET writing this, no less!! "Love our new technologies".)

And sadly, Tal, for many "Don't say damn, take a gram" is still the prime directive.