The Ball Is In The Government's Court 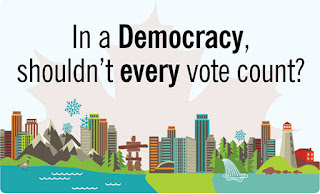 The NDP has come out in favour of holding a referendum on electoral reform. Given the recent history of such efforts -- Brexit and the American election -- we're getting into dangerous territory. The status quo looks more and more like the outcome.

Dennis Pilon writes that there are essentially three positions on electoral reform:

Since the Liberals announced their plan to move forward on voting system reform, responses have fallen into three broad categories. One response insists that everything about changing the voting system is constitutional in nature and would, at the very least, require the sanction of a referendum.

The second approach says that as there is no perfect or ‘right’ voting system, the issue is simply a matter of taste that depends on what you prefer in terms of electoral outcomes.

The last approach argues that voting system reform is a means to significant and necessary democratic reform and, as such, is not really up for legislative debate or a public vote — that changing from an undemocratic system to a more democratic one is the only acceptable option.


Two of the parties now favour the first approach. How much support is there for the third approach? Well, Pilon writes:

The third position — that voting system reform is a matter of urgent democratic reform that should be implemented by the government as soon as possible — is the only one that has any serious academic support. Canada’s traditional single member plurality voting system fails to represent what most individual voters say with their votes. It misrepresents legislative results for parties in terms of their popular support, and tends to create phoney majority governments that do not enjoy the support of a majority of Canadian voters, leading to all sorts of problems.

And there is plenty of evidence to support that position:

By contrast, the experiences of western countries which have used different forms of proportional representation suggest we can do better — that we can create more accurate and inclusive representation in our legislatures, with governments that really do reflect a majority of the Canadian electorate. Critics complain that PR is all about giving parties what they want — but this is just empty campaign rhetoric. PR is about empowering individual voters to get what they want, by equalizing their voting power.

There really are no compelling democratic arguments for keeping our current voting system. Indeed, most of the arguments against reforming it sound a lot like 19th century arguments against giving working people the vote: that they’re too ignorant, that they might vote for parties that elites don’t like, that it might lead to unpredictable outcomes, etc.


The ball is now in the government's court.

The majority of times that governments move on their legislative agenda, no matter how controversial, they justify their right by saying they were given a mandate by the voters.
Given that Trudeau talked about electoral reform during his campaign, I don't see why the issue of electoral reform should be treated any differently, Owen.

I agree, Lorne. He was elected on a promise of electoral reform. I see no reason why he should not deliver.

Owen, you see no reason why he should not deliver? Really? How about the fact that he's now PM thanks to FPtP!

The major parties have spent valuable time and money perfecting ways of getting FPtP to work for them. No party has had more success under FPtP than the Liberals. Liberal strategists are obviously happy with their success in the last election, and no doubt loath to change to a new system they can't predict and haven't worked with before.

I bet there's a lot pressure coming from his own party not to deliver on electoral reform. Indeed, it looks to me like he's trying to run out the clock by delaying any change beyond the date Elections Canada says they need to implement it.

You may, indeed, be right, Anon. As Pilon says in his column, it's all about power. It will be interesting to see if Trudeau keeps his promise.

scorpion and the frog, we are the frog