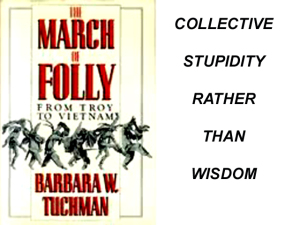 Last night Americans handed the White House, the House and the Senate to Donald Trump. And they normalized their demons -- demons that have been there for a long time:

The Paris Climate Accord is dead.
Obamacare is dead.
The Iran nuclear deal is dead.

We should expect more nuclear activity from North Korea.

A con man relies on human stupidity to succeed. The March of Folly continues. It's going to get very messy as the American Empire falls apart.
Posted by Owen Gray at 8:57 am

I said all along Trump will beat Hillary like a rented mule. I was correct. Trump barely ran for President, no ground game, few offices, barely advertised. The media and establisment against him.
The democrats picked the only person in America that Trump could beat. Any other choice would have won.
America thought like me, what Hillary represents is so abhorent, Trump is the only choice.

I am cautiously optomistic. Trump love him or hate him is a success in the real world. Its differant being a success politics or the military. IMHO the last President who was a great real world success was Eisnehowser.

Day one the nuclear war with Russian is now off the table.
TPP is dead.
Corruption, I expect a bunch of new crooks and this will spread the money around.

You got your wish, Steve. Remember the old caution: Be careful what you wish for.

My wish was that corrupt Hillary had not gamed the primary and that Bernie would be President today.

That's a wish we could agree on, Steve. Unfortunately -- for the United States and the world -- that didn't happen. But things weren't gamed. Voters got what they wanted and deserved.

We should all hope that Trump meant it when he played the Rolling Stones, you dont always get what you want as his final message to the world.

Yikes! I mean, really, yikes. Several thoughts, Owen. A friend of mine, when we discussed Barack Obama being the Democratic candidate and I opined that I didn't think Americans were ready for a Black person as President and that perhaps Hillary might have a better chance, told me that Black men got to vote in the US before women did. Turns out she was right. Secondly, after living through Bush 1 and 2, it seems there were many voters who weren't willing to go with Clinton 1 and 2 and wanted something else. It also seems that supporters of Bernie Sanders as well as other Democrats who felt Hillary's (apparent) voraciousness when it came to money, either stayed home or voted Republican. What a choice, eh?

I can't really agree with Steve that the overall media was against Trump, given the amount of attention they gave him through this whole process. But, at the end of the day, how could a country supposedly so worldly and smart, as the US thinks itself to be, ever come to vote for someone so patently out of sync with what most of them claim to represent? or have we so terribly misjudged our neighbours to the south?

I spent time in North Carolina as a graduate student, Lulymay. I witnessed Vietnam War protests and protests over the busing of black children to white schools. I remember one incident, where baseball bat carrying protesters stopped a bus, hustled the students off it, smashed the windows, and overturned the bus.

Some Americans are capable of the vilest behaviour. Now they have elected one of their own.

As I have said before, Trump or Hillary is a false choice that forces those so brainwashed to accept that they have to vote for the lesser evil. Indeed many voters did so - they held their noses and voted for Trump, at least in sufficient numbers to win the electoral college votes.

Well over 80% of voters, according to a McClatchy survey (I think), were disgusted by both Trump and Hillary. Therefore, it would have been likely that had one or both of the third party candidates been given more exposure (by being allowed to participate in the debates, by being given more exposure by the MSM), or had Bernie Sanders decided to run for the Green party, the results could have been very different.

And, no, it was not the vote splitting by the third party candidates that gave us Trump. Hillary actually won the popular vote count, according to CNN ("Clinton News Network", Lol), by about 236K; in fact, her lead over Trump is expected to increase to over a million votes once other Dem leaning states are all counted.

In fact, without third party candidates, Trump would likely have won the popular vote as well (or Hillary's lead would have been significantly reduced) as the Libertarian candidate, Johnson, likely siphoned relatively more votes from Trump than Hillary. Many Republicans unhappy with Trump were saying they were voting for Johnson. By contrast, Jill Stein, the Green party candidate likely siphoned more votes from Hillary than Trump, especially from Bernie's supporters, but actually got much fewer votes than Johnson.

The DNC and the elites (including Obama) backing Hillary from Wall St., Big Pharma and the military industrial complex are responsible for foisting a majorly flawed candidate on voters and giving us Trump.

Last night their better angels were put on life support with a very poor prognosis.

You're giving Hillary too much credit, Anon. Trump is a salesman par excellence. And he knows how to run a con. All those folks who believe he's going to bring those manufacturing jobs back are living in a fantasy world. This from Michael Harris:

A little history here. Production in the U.S. manufacturing sector has actually gone up 66 per cent since the days when those jobs were migrating abroad. Most of those productivity gains were achieved by robots, in high-tech factories. The kind of factory jobs blue-collar voters in Ohio and Michigan dream of getting back under Trump are relics of a distant past. They’re not coming back.

As for his claim that America’s auto industry will return in all its glory, and that Michael Moore’s hometown will flourish like your grandmother’s begonias … it’s a little more complicated than ripping up NAFTA. As long as other countries offer much cheaper labour and zero benefits to their workers, the only way Motor City with rise again is by becoming Little Mexico. Tearing up free trade deals like NAFTA might make for good retail politics. But its only practical effect would be to trigger trade wars that would make consumer goods more expensive.

Imagine what will happen when Trump can't deliver. If he's lucky, he may be able to leave town, like Harold Hill, before it all hits the fan. If he can't escape -- and his supporters discover that what he sold them is as valuable as a diploma from Trump University -- it's going to be tar and feather time.

@Owen: But your are making my point. Both major candidates were flawed and "utterly unfit" (Eric Margolis' words) for the highest office in their land.

Over 60% of voters consistently saw both Trump and Hillary as untrustworthy and dishonest, yet many still voted for them because they had convinced themselves, or been brainwashed into thinking, that they had no choice. Margolis voted for Johnson and Chris Hedges for Stein because these two obviously recognized they do have a choice. If sufficient numbers had recognized that too, we would not have either Trump or Hillary in the oval office.

The interesting thing, however, seems to be the inability of liberal/Dem. voters to understand that the Republican, and indeed many independent, voters actually see Hillary as the greater evil. These voters apparently could not fathom voting for someone they believed had used public office to enrich her family wealth and/or had committed an act with her emails that would have sent other less well connected people to jail. They were voting to drain the swamp, torpedos be damned. The polls, if one can trust them anymore, showed that 84% of voters thought that Hillary had done something wrong with the emails; of these, a majority 53% thought she had done something illegal, the rest thought it was unethical, not illegal.

For what it is worth, I actually do agree with you that Trump is a conman and it is unlikely that he will be able to deliver the manufacturing jobs in the rust belt states because the times have changed. Who knows if the Trump voters know this? But the answer is irrelevant. The Trump supporters were voting for what they perceived to be the lesser evil, right?

I agree that Trump voters were voting for the person they perceived as the lesser evil, Anon. And the results show just how divided the nation is on that question. In fact, I suspect that the United States has not been so divided and angry since the days of Vietnam War, when kids were in the street chanting, "Hey, Hey, LBJ, how many kids did you kill today?"

It sounds like Trump will face that same kind of hostility. But let's face it. He stoked that kind of division. As John F. Kennedy said, "Those who ride to power on the back of the tiger wind up inside."