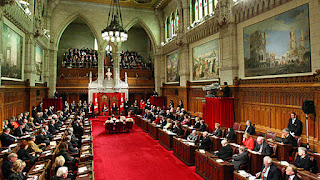 If Meech Lake had passed, the Senate would have been reformed. Ken Whyte writes that Peter Lougheed understood just how radically the Red Chamber would have been transformed:


Mr. Lougheed was a great careerist as well as a great politician, and he had thought about Senate reform with both career and politics in mind. He believed that any step toward Senate reform would transform the institution at the expense of the House of Commons, so much so, he said, that “if I was starting out in national politics today, there’s no way I’d waste my time in the Commons. I’d want to be in a reformed Senate.”

He started with the math. Try it yourself. There are 338 members in the House of Commons (there were slightly fewer back then). There are 105 members of the Senate. If you’re an ambitious politician, do you want to be one of 338 or one of 105?

Justin Trudeau has begun the process of making the majority of Senators independent. Inevitably, that will mean changes:

Senators no longer bound to party caucuses will form their own caucuses and alliances. They will learn to pool their votes, or log roll. The lists of amendments appended to bills from the Commons will get longer and longer, and the negotiations between the chambers to land a bill will get tougher.

Eventually some senator will draft an act all on his lonesome, and after that they’ll all be draftsmen.

Corporations, lobbyists, special interest groups and ambassadors will start spending time with senators, especially committee chairs, who will become as important as cabinet ministers in Ottawa (and more expert, given the odds on their longevity).

Senators will become head-table fixtures at chamber of commerce luncheons and prized guests on television shows. Not only will these outside forces want to meet and buy senators, they’ll eventually try to plant their own people on lists for consideration as new senators.

Just how things will sort themselves out is hard to know. But the Senate will no longer be a place where nothing important happens. And the tensions between the Green and the Red Chambers will increase.

If  Lougheed were alive today, he'd want to be there -- watching the Senate reform itself.

Tiptoeing toward a republic.

Possibly, Dana. The separation of powers.