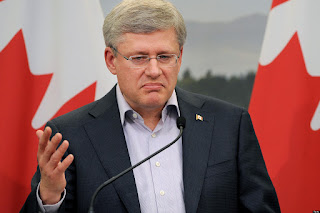 When he assumed office, Stephen Harper boasted that we wouldn't recognize Canada when he was through with it. But Jennifer Ditchburn and Graham Fox argue in the final chapter of the book, The Harper Factor, that -- after ten years in office -- there is little lasting in his wake:

While he was certainly a polarizing political figure — perhaps the most polarizing of his generation — it would be difficult to argue that his government fundamentally changed the course of public policy in Canada. This is not to say that some of his decisions weren’t controversial, or didn’t break with the past, and as David Zussman’s chapter explored, Harper did alter the way in which policy was developed inside government. But the analyses in this volume have shown that in many cases there was a significant gap between the scope of change announced by his government (or decried by his opponents) and the amount of change that was actually implemented.

Murray Brewster’s examination of the government’s commitment to re-equipping the military is just one example. Even in cases where the change was more dramatic, it doesn’t necessarily follow that the change will be lasting.


That's because, for Harper, politics always mattered more than policy:

The supremacy of politics over policy also manifested itself in the proliferation of micro or retail policies during his time in office. These tailored measures were aimed at small pockets of accessible voters in target constituencies. The tax credit for children’s sports equipment was marketed as a tool to encourage physical activity, but it was largely about impacting the electoral choice of parents in the suburbs of Toronto. Likewise, barring certain refugee applicants from health care services appeared designed to resonate with certain elements of the party’s base of support.

Winning three consecutive mandates and remaining in office almost ten years is a feat few Canadian political leaders have achieved, and so Harper is assured a place in history. But that is a political achievement, not a policy achievement. During his time in office, he made a great many decisions — some of them good or even great, others bad or worse — but we are at a loss to note one signature policy achievement that will, in future years, define his prime ministership.


We have had prime ministers of both parties who changed the country:

Diefenbaker’s Bill of Rights, Pearson’s Medicare, Pierre Trudeau’s Charter of Rights and Freedoms, Mulroney’s free trade agreements and acid rain treaty. Those signature achievements have ensured each of them has shaped the lives of Canadians well after leaving office.


The only thing that Harper changed -- for awhile -- was the country's tone: As a nation, we became more bellicose and nasty. He did, after all, give us the Barbaric Practices Snitch Line. But the country never took on his ideas.

Image: The True North Times
Posted by Owen Gray at 6:03 am

I would argue that he did in fact evoke a lot of change. People in this country are so sick of politics and have developed a real distrust and apathy for the politicians and the process. It will be a long time coming before anyone can change it back.

You may be right, zoombats. He did not introduce any long term policy changes. But he was a corrosive factor -- the Trump Factor, before Trump became a factor.

Harper believed in Neoliberalism to the very core of his being, both domestically and globally and he worked very hard at trying turn the Canadian governments into a market state.

"Harper did alter the way policy was developed." He did indeed, including developing policy in secrecy, mainly driven by neoliberalism, both domestic and global.

There won't be many lasting changes because neoliberalism is still here.Trudeau has embraced it completely, it's what defines most of his policies.

Neoliberalism under Harper and now Trudeau is a root cause. Scratch most policies from either man and you'll find they evolved from neoliberalism.

That's what is most disturbing about our situation, Pam. Harper is gone. But the influence of neo-liberalism is alive and well.

"...we are at a loss to note one signature policy achievement..."

Harper moved the centre significantly to the right. Echoes of that move will haunt us for generations.

As Pam suggests, that seems to be true, Anon. On the other hand, in a rapidly changing world, I wonder how long anyone's legacy will last. We shall see.

Harper was constantly battling against history. It will be interesting to watch his doppleganger Trump wage the same war with a more populist tone. Snow Mexicans, this is in so many ways the perfect discription of Canadians. We think we are special snowflakes but in reality the USA dictates.

They certainly would like to dictate, Steve. But, even in the first few days of his presidency, he's sparked a rebellion at home. I expect a similar reaction in many other countries. We'll see how far the Great Dictator gets.