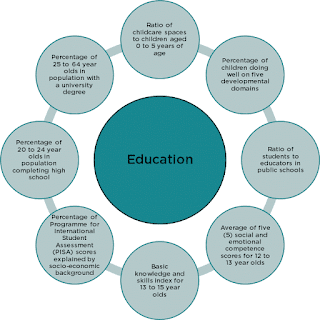 We live in a digital age -- a time when numbers are everywhere. One number -- we've labelled it GDP -- has taken on a mystical quality. It has become the sole measure of our progress -- or lack of it. But there are other numbers that give a much more comprehensive measure of how far we've come or how much we have regressed. Roy Romanow writes:

Based at the University of Waterloo, the CIW [the Canadian Index of Wellbeing] tracks 64 indicators representing eight domains of vital importance to Canadians’ quality of life. Where GDP counts money circulating in the economy, the CIW captures fluctuations in community vitality, democratic engagement, education, environment, healthy populations, leisure and culture, living standards and time use to describe how we’re really doing.


And that number explains what has been happening in Canada, the United States and Britain:

From 1994 to 2014, Canada’s GDP grew by 38 per cent while national well-being only rose 9.9 per cent. What’s more, the 2008 recession stole our living standards, our leisure and volunteer time, even our sleep — and we never got them back.


At the national level, the picture that emerges over the past 21 years is a GDP rebounding post-recession but Canadians literally continuing to pay the price. From 1994 to 2008, the living standards domain rose 23 per cent. Then it plummeted almost 11 per cent and has yet to recover. Gains made on reducing long-term unemployment and improving the employment rate were lost. Income inequality is rising. And, despite increases in median family incomes, millions of Canadians struggle with food and housing costs. When living standards drop, community, cultural and democratic participation follow suit. Surely, this is not our vision of equality and fairness in Canada.

Canadians’ were hardest hit in the leisure and culture domain, which declined by 9 per cent overall. We’re taking less time enjoying arts, culture, sports — even vacations — the very activities that help define us as individuals. On the eve of Canada’s sesquicentennial, household spending on culture and recreation is at its lowest point in 21 years.

For the last thirty-five years our policy makers have suffered from economic tunnel vision. Each month they have waited for that monthly GDP measurement -- and for quarterly stock market results -- like addicts waiting for a fix. And, like all addicts, they have lost sight of the big picture.

Romanow insists on looking at the big picture:

The complex issues of our time require evidence, integrated systems thinking and proactive approaches. As we set our course for the next 150 years, we need to place the well-being of all Canadians at the very heart of Canada’s vision.


Image: University of Waterloo
Posted by Owen Gray at 8:29 am

Email ThisBlogThis!Share to TwitterShare to FacebookShare to Pinterest
Labels: The Canadian Index Of Wellbeing


This stands as a powerful indictment of the neoliberals who now dominate every one of our political parties in Canada. That includes the governing Liberals, the Tories and even a good many in the now centrist NDP. The growing gap between GDP and the public wellbeing is a manifestation of the political and regulatory capture inherent in neoliberal ideology. The worst part is that it is an ideology, tantamount to a religion, based on belief, not fact or evidence. Our governments support globalism because they choose to believe in it with a belief powerful enough to overcome clear evidence that it does not work except for the narrowest minority and the plain warnings from bodies such as the World Bank and the International Monetary Fund. Those who worship in that temple, including the disciple Trudeau, continually show a closed mind devoid of vision. They cannot change because they can't envision change.

Our institutions have been captured by a narrow, mean spirited crew, Mound. Worst of all, they think of themselves as realists.