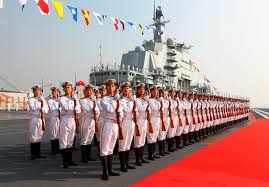 Everywhere you look, Donald Trump is looking for a showdown. California has hired former Attorney General Eric Holder to take him on in his battle over sanctuary cities. New York mayor Bill DeBlazio vows that the city's police will not cooperate with Trump's program to round up  illegal immigrants. And then there's Trump's battle with the three million facts who didn't vote for him.

But, Michael Den Tandt writes, the big showdown -- the one with China -- is just around the corner:

The U.S. Navy is the guarantor of last resort for international law and international shipping through the South China Sea, worth an estimated US$5-trillion annually. China is attempting to assert a claim over much of that open ocean, contained by its so-called nine-dash line, as well as a group of small islets in the East China Sea in Japan’s Okinawa Prefecture.

Chinese incursions into territory long claimed by its neighbours have become commonplace in recent years, causing Japan to re-garrison its farthest-flung islands. Regional nerves have been further frayed by the People’s Liberation Army’s rapid building of various regional shoals and reefs into what appear to be air strips and fuel depots.

China’s export-driven economy has long relied heavily on access to the U.S. market for steady, rapid growth. But that expansion, formerly in double digits, has slowed in recent years as the Chinese economy matures. This slowdown, which seems irreversible, has been posited by some analysts as the underlying reason for President Xi Jinping’s heavy-handed assertion of control over all aspects of the Chinese state — and Beijing’s new restlessness with regional limitations on its influence. Any dramatic curb in Chinese exports to the United States is likely to exacerbate such pressures.


Trump is spoiling for a fight with China. All indications are that he will get it. The problem is that those who spoil for a fight generally lose it -- to use a Trumpian phrase -- big time.

Email ThisBlogThis!Share to TwitterShare to FacebookShare to Pinterest
Labels: Trump And China

I found Den Tante's analysis less than convincing. How can control of a few uninhabited islands lead to economic growth in China.

China is seeking economic growth through trade and cooperation. Pipelines with Russia are underway. The One Road is pushing west towards the middle east and Europe. China is building ports and bridges etc in Africa .

Essentially, Den Tandt is saying that the Chinese value the American market, rumley. And they can make life difficult if restrictions are placed on their goods and services. After all, the Americans owe the Chinese a lot of money

Add this to the mix and anything having to do with international relations any where just became a lot more complex and challenging for the Turnip administration.

All of the fights that the US has started they have lost, starting with Vietnam.Their present attempt at fighting with China and Russia hopefully they will also lose. Their constant barrage of propaganda and outright lies against Russia and China is meant to provoke both countries into war. It matters not that these countries have nuclear weapons.

It's interesting Owen that all of the US invasions and political interference in other countries, (I don't always think of them as wars) begin with lies.There are many examples but to name a few like Vietnam, Iraq, Afghanistan, Syria, Libya and Ukraine regardless of the US's powerful military or when using their financial and military backed proxies they fail.

It is this ignorance of the US government and it's military that frightens me more than anything.

Trump's a salesman, Dana. He's no manager. The business is bankrupt.

"The U.S. Navy is the guarantor of last resort for international law and international shipping through the South China Sea, worth an estimated US$5-trillion annually."

Says some American or another. The USN haven't done much to stop piracy in the South China Sea as any search on Google will show. It's just another part of the "we make the world safe for democracy" rubbish we get fed, after 46 countries since WW2 have felt US boots and bombs belying the rhetoric. The USN itself couldn't care less about world trade, and the US builds military bases encircling both Russia and China, and then bleats about the two places being on some world expansion phase. Right. I have no time for any of these big boys, but the US tells the biggest lies.

Really, as per the Project for a New American Century published in 1997 as the blueprint for Neocons, it's the US that wants to take over the world and turn it into a revenue stream. Why, they're just so exceptional. Blessed with an uncritical home population, it continues to blame others for doing exactly what it itself is happily doing, whereas it's quite unclear that the others are on a worldwide rampage. Americans see every other country as possible competition in the way of their ultimate hegemony. Read PNAC. It's on the web.

Then we get some guff about China becoming ever more authoritarian, which anyone could make up without proof. "Some sources say" blah blah blah. It's more likely China would guarantee trade through the South China Sea than the US would; the latter is just trying to make sure it has a chokehold to stop Chinese trade if it feels like it. Upside down and backwards as usual. Japan is a US vassal, as are we, so we print the US drivel as if it were the honest truth, accepting wobbly justification as easily as Joe The Plumber from Pennsylvania.

One thing's for sure. With the Bloviator Supreme in charge rampaging around like a bull in a china shop, dead set on bullying Mexico into abject humilation, and making his usual bully moves against China who refuse to countenance being told what to do by anyone else for any bullshit reason whatsoever, nuclear war is in the offing. Count on it. Trump is like Mao, hasn't a clue about the utter devastation an atomic bomb of any kind causes, so he's about to find out come hell or high water. Maybe he can write a Little Orange Book, a Compilation of Extraordinarily Important Tweets for all to read and comprehend.

I used to horde Canadian Heinz beans for those head down moments when a tin opener and a sppon might sustain life in an underground hole for a couple of weeks. But all we get now is the insipid US Heinz beans since Heinz Canada was shut down 30 months ago, yet another NAFTA humiliation we have faced here in Canada. I still have 3 cans of Leamington beans left, opened one last week. Yes, they're easily twice as good. So I officially give up. There isn't much left at my age to look forward to.

BTW, want to read the story of the court case the US paid for in the Hague, about stopping China from building military atolls? It's a great read.

Thanks for the link, BM. I note that scientists have moved up the Doomsday clock. They say we haven't been this close to the Apocalypse in 64 years.

BM I really admire your posts. In the bigger picture you have connected all of the dots and come up with the only conclusion worth arriving at, the truth, even though that truth is very disturbing.

Den Tandt typically presents China as a 2-dimensional issue. Rarely do Western journos delve very deeply into how China and the other nations of Asia Pacific see the same issues.

He doesn't understand the Chinese military's preoccupation with avenging their country's "Century of Humiliation." Even American officers who have participated in war game exercises with Chinese officers report that the anger among their Chinese counterparts is visceral.

With Trump's rejection of TPP he has sent a powerful message to America's Asian allies that the United States is unreliable. Trump's inaugural speech drove home that same point. To the nations of the western Pacific, New Zealand and Australia included, China is the inescapable reality and the dominant presence in the decades ahead. Trump has reduced America's status to that of a meddler and a potentially dangerous presence at that.

China may need access to American markets although not as much as it did a decade ago. Asia Pacific is the new economic powerhouse. However den Tandt and others overlook how dependent the US is on China for two things - borrowings to cover America's perpetual deficits and the continuation of the US dollar as the world's reserve currency.

TPP was intended to exclude and thereby contain China. The Chinese deal, RCEP, excludes the United States and expands Chinese influence with the rest of Asia Pacific. Trump made all that possible and, in the process, narrowed America's foreign policy tools in that region to the military option.

It's well known that the Chinese believe the American people would buckle from the loss of tens of thousands of American lives in a brief and bloody clash with Chinese forces in their home territory. China is more than prepared to accept losses even greater. Trump cannot mass a stealth force in Kadena, Okinawa or Osan, South Korea, without justifying a Chinese pre-emptive attack.

I so hope he's not that stupid. I have no reason to believe that.