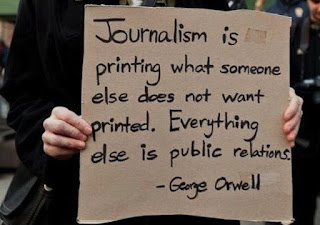 Presidential counsellor Steve Bannon has told the media to "shut up." And his boss has called journalists, "the most dishonest human beings on Earth.” In the wake of those pronouncements, Robin Sears writes:

Tyrants always respect and fear an independent media, often more than journalism’s ordinary readers. They understand its power to reveal their agendas, to mock their follies, and to delegitimize them. That’s why they do their best to demonize and marginalize journalists. From Mussolini to Chavez to Putin and Erdogan, it is a tactic proven successful – at least in the short term – for tyrants everywhere.


Trump's recent executive order provides yet more proof that he's a tyrant who lives in an alternate reality. He believes that, over the weekend, things went well in airports. And that puts a special burden on journalists:


If as a journalist you have evidence of misconduct, of bald-faced lying, of policies inimical to agreed American self-interest, you report it. You ensure your sources are bullet-proof, you seek out respected endorsers for your findings. But you report it – even if the Trump regime gets advertisers, subscribers and viewers to threaten to walk. A tactic you may be sure they will use.

Tyranny sometimes arrives on quieter feet than burning down the Reichstag. But it always requires threatening and bullying an independent media into submission. Sometimes it is brutal in its repression, but often it succeeds “by changing the channel” constantly. Introducing irrelevant news stories in response to attack, or staging corny photo ops. Tyrants always use a compliant media to denigrate opponents with phony stories. Like Pravda, in Putin’s good old days, house organs like Fox and Breitbart have used those tactics with devastating effect.

It is a foolish cliché to cite the unpopularity of the media. Lawyers, cops and politicians don’t rank much higher. Yet few of us do not cheer when any of them successfully defend justice and defeat the bad guys. When tyrants try to drive the media’s reputation down even further it’s important not to dismiss it, or worse quietly snicker. Failing to smack back at Trump’s media taunts is at some point to fail to defend the republic.

This is journalism's moment.

Image:  Metal Recusants
Posted by Owen Gray at 8:32 am

Much of what is in on CBS, NBC, FOX and right up to the NYT is only opinon with little nuance.

it is clearly an opportunity for real journalism to shine, Owen, or to forever be consigned to ignominy. Let's hope it makes the right choice, for all of our sakes.

What is required, Steve, is good investigative journalism -- which reveals how false the "alternative facts" are.

This really is a critical moment, Lorne. What we need are curious, gifted, courageous people.

You won't find any journalism coming from the robber baron media. They are running an establishment script: incite the people to hysteria so they won't talk about the real issues. It's all distraction and divide and conquer. Keep them doggies rollin'!

The best way to defeat Trump is to rationally criticize his plan of action – and offer better. The people who say he's illegitimate are really saying they are opposed to democracy. Like Romney calling the bottom 47% "moochers": not the best way to win friends and influence people when that's what you have to do to get the power to change things.

Surely there is enough in Trump's platform to rationally criticize him on. Surely liberals have something to bring to the table after bringing 25 years of nothing.

There are all kinds of factual reasons to bring Trump down, MAGA. But it's going to be a battle to get the facts out.

Those are all opinions, Steve -- which you are entitled to. But they're not facts.

Thats the problem Owen. If its a political problem its always an opinion. The right greatest success is to make facts politicall.

And that's why it's so important that citizens understand that a fact is objectively provable, Steve -- like the date and time of your birth. The proof is your birth certificate.

So are you saying you believe Obama was born in Hawaii?:)

Owen Gray said, "And that's why it's so important that citizens understand that a fact is objectively provable, Steve -- like the date and time of your birth. The proof is your birth certificate."

Not necessarily. My birth certificate was deemed inadmissible.

That's what his birth certificate says, Steve -- and it gives the name of the hospital.

On what grounds, Toby?

Pure technicality. I'm old enough that the blanks were filled in by someone who used a fountain pen. The rules required that it be typed. If it hadn't been that there probably would have been another technicality. When officialdom wants to show its muscle it finds a way.

I can remember when some schools wouldn't accept papers which had been produced by a dot matrix printer, Toby. Sometimes the powers that be are just silly. In fact, there's a lot of silliness going around these days.

The hatred of the media by the rightwing is, perhaps, the greatest irony in the entire Trump phenomenon because for the past 40 years or more the media has become more and more concentrated in the hands of Trump's friends and it has been complicit in the socioeconomic agenda which Trump has supported and from which he has benefited. For Trump to demonize the media the way he has is a bit like the giant oil companies blaming the Car industry for climate change. They way that Trump's supporter lap up this lie alone demonstrates how little they actually understand what is going on.

Their central strategy is all about sowing confusion, Kirby. That's what the travel ban is all about. When people don't know which end is up, they stop looking for the goal.

@KE: The reason Americans elected Donald J. Trump their president is because they were given no alternative. This concentrated media, in the hands of the establishment, was campaigning for Hillary. Given the similarity in talking points, it appears they were coordinating. But Americans still rejected them. "You cannot fool all of the people all of the time."

Americans elected their first Black president back in 2008 on a platform of hope and change. They are obviously not racists as liberals foolishly suggest. But he betrayed them and represented looting oligarchs instead. Now it's Plan B time.

Don't like it? Americans gave the Democrats Plan A. Gave Obama a super majority. But he sold out. If liberals had been paying attention to their politicians taking bribes and auctioning off government turning the economy into a misery then you wouldn't have a situation where Donald J Trump was given the job of cleaning it up. Lie in it!

Thank Donald Trump, by the way, for killing the TPP which Obama was going to foist on Americans during the lame-duck session working with Republican neocons if Hillary had won election. Canadians must also thank Trump for stopping Trudeau Jr. from inflicting this absurd outsourcing scam on the country. Those are the kind of politicians you support.

That Liberal Robin Sears discredits himself by calling Chavez a tyrant who attacked a free press.

Chavez was an elected leader who pushed back against an oligarchy that called for his overthrow and supported a genuine coup against him.

What would any US administration do to such a media in their own country.

It's gratifying to see resistance to Trump. But it's disheartening to think of how liberals like Sears and etc., might screw it all up by using it as an opportunity for their own discredited partisan agenda.

Facts matter more than opinion at this juncture, thwap. The facts -- real facts, not alternative ones -- will speak for themselves.