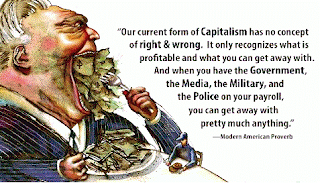 God knows, governments are imperfect and the source of great frustration. Some suggest that the antidote is to run government like a business. On Friday, Donald Trump says that he will run the United States like a business. And, starting today, Kevin O'Leary is making the same pitch.

But, Mark Bulgutch writes, applying business principles to government doesn't solve the problems -- because business suffers from the same problems:

Volkswagen programmed its engines to control emissions only when they were being tested in labs. Once those engines hit the road, they emitted 40 times more pollution. Not to be outdone, Fiat Chrysler installed engine software to disguise the fact that illegal amounts of nitrogen oxides were getting into the air. To be clear, this wasn’t accidental. In the words of the California Air Resources Board, “A major automaker made the business decision to skirt the rules.”

Takata put faulty airbags in millions of North American cars. Then it prepared falsified reports to cover it up. At least 16 people have been killed by those airbags exploding violently.

The Walmart in Fort McMurray, Alta., has been hit with 174 charges of selling food unfit for human consumption after last year’s terrible wildfires. Walmart reacted to the charges with a carefully worded statement that doesn’t deny anything. It just says it worked closely with food inspectors. Those same food inspectors say they gave Walmart guidance in person and in writing and that what the store did was, “a direct and avoidable risk to the health of this community.”

The antidote to corruption in government or business is character, not technocratic expertise. And, these days, money seems to corrupt character:

Money is literally the bottom line for business. There’s no such thing as too much. The Canadian Centre for Policy Alternatives reported this month that the 100 top CEOs in Canada made an average of $9.5 million dollars in 2015. The top earner was Michael Pearson of Valeant Pharmaceuticals. He made $182.9 million. That’s about 536 times more than our prime minister makes. Looks like the government made a good deal.

Politicians, who now raise money 24/7, are looking for a piece of that action. Take money out of politics and you just might restore the character of its participants.

Image: Before It's News

Email ThisBlogThis!Share to TwitterShare to FacebookShare to Pinterest
Labels: Money And Politics

O'Leary may not speak french but he speaks fluent Trump, Owen!

And, when it comes to knowledge of the country, Rural, he is just as ignorant as Trump.

That's why Trump is in the White House: liberal politicians taking money representing corrupt interests while only pretending to represent the people. His two key planks: drain the swamp and protect jobs from the outsourcing bloodbath destroying the Western economy.

It doesn't matter whether or not Trump keeps his promises. That is not the message. The message is that the neoliberal era has collapsed and now the people are looking for leadership. They are done with fake leadership. You don't want to find out the kind of characters who will rise to fill that vacuum in Europe. Bitter vengeful alpha-wannabe rejects who fancy themselves Roman emperors guided by divine providence. They would make Donald Trump look like a reality TV host. If that happens the jig is up: world war. (The final in the trilogy.)

The problem is that the establishment thinks the people are cattle easily managed/manipulated/fooled with what are essentially animal husbandry techniques. Using modern consumer psychology science to construct and propagate establishment memes and messaging across their 'fake news' media. The people are not as dumb as they think. They turned that one around pretty fast.

Like for instance: is Bill Clinton a superstar? Beyoncé to corporate executives? They are willing to pay him over $100-million just to listen to him flap his gums? The idea is laughable. Infantile. It's obvious to non-partisans – most people – what's going on: these are thinly veiled payments for services rendered. The cashing in on promissory bribes.

Like Kathleen Wynne selling off Hydro One. Bribery is the only explanation that makes any fiscal or political sense. Mulroney got caught taking a bribe the old-fashioned way. Look at how David Johnston saved his arse. And was rewarded with the 'governor general' appointment. How absurd is it for someone to suggest that this kind of corruption could never happen?

The entire Friedmanian neoliberal era that began with Reagan is a fraud. A ludicrous fraud. A body of economic ideology nakedly self-serving to the upper class. They promised prosperity and caused global economic collapse. They promised to create jobs with trade deals that ship good paying jobs out of the country. It's Orwellian.

A $30/hour auto job becomes a $3/hour auto job in Mexico. Who's going to buy the cars? Oh, the Federal Reserve can fix this wanton destruction of demand by printing money buying up fraudulent, toxic, worthless, 'financial innovation' investments – used in manipulating housing and financial markets to loot trillions of dollars from investors and taxpayers.

On top of that: anti-regulation and deregulation for pre-fraud and re-fraud. Privatization of public utilities – typically monopolies – that allow plutocrats to gouge exorbitant rents for nothing. Efficient taxation ideology: i.e., slash taxes for the rich – income, investment and corporate taxes – funded with government borrowing – i.e., destroy democratic government by bankrupting it. Manufacture debt crises to force spending cutbacks and facilitate the privatization of public utilities. It's a zoo.

The emperor wears no clothes.

I agree, MAGA. The emperor wears no clothes. So, here's the question: How does it end? The final in the trilogy?

It ends with what is now an inevitable and fast approaching extinction event.

If we don't change course -- and there appears to be no will to do so -- that's what awaits us, Dana.

Your question scares me, Owen. The great Laissez-faire of the turn into the 20th Century ended in WWI. Corrupt systems tend to end in violence, often spectacular violence.

You're right, Toby. The last era of global free trade ended in World War I -- as nations sought to protect their territory and punish infidels.


In December a story made the rounds about the history of unified GOP governments where the Republicans controlled the House, the Senate and the presidency. In each case where the unified government endured past one mid-term election, economic disaster ensued. This includes the Panic of 1907, the Great Depression and the 2007-2008 meltdown. All of these devastating events were put in motion by Republican control of the US federal government.

As for Toby's comment, it should be remembered that, prior to the outbreak of hostilities, Germany was the main trading partner of both France and Russia. All three nations had a powerful, vested interest in averting hostilities. All three failed. That's what can happen when countries, through slipshod leadership, allow themselves to back into wars, a scenario that could be revisited with China and, to a hopefully lesser extent, with Russia.

Margaret McMillan's book, The War That Ended Peace, chronicles how a world which saw an epoch of progress dawn at the beginning of the last century slid into the conflagration that was World War I, Mound.

It's so easy to get things terribly wrong.

'So, here's the question: How does it end? The final in the trilogy?'

Last time around – after looting robber barons had previously destroyed the global economy – FDR turned things around with a 'New Deal' based on Keynesian mixed-market economics. But by that time fascists had already risen to power in Italy, Spain and Germany. The inevitable result was world war.

Therefore, in order to prevent WW3 from destroying civilization we have to bring back the New Deal era BEFORE the fascists rise to power again in Europe.

Now that Hillary is out of the way, the American people will have four years to reclaim the Democratic Party and run on a New Deal platform in 2020. This will enable people in other countries to rise up and turn the tide on the disastrous Friedmanian era that began with Reagan and Thatcher.

The times they are a changing.

I agree that we should learn from the Roosevelt era, MAGA. Whether or not we will is the other question we face.